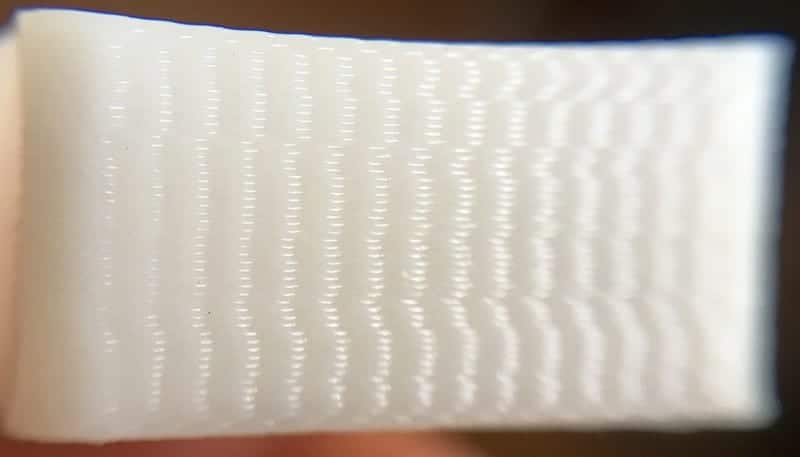 Ghosting is a problem that you’ve probably experienced if you own a 3D printer. This problem fortunately has some fairly easy solutions which I’ve described in details for all you out there, so keep reading and lets get this issue fixed!

Ghosting, also known as ringing, echoing and rippling, is the presence of surface defects in prints due to vibrations in your 3D printer, induced from rapid changes of speed and direction. Ghosting is something that causes the surface of your model to display echoes/duplicates of previous features.

You are likely to be seeing a repetition of lines or features across the exterior of a printed object, especially when light is reflecting off your print at a certain angle.

Ghosting sometimes can only affect certain parts of your prints. So some areas of your prints look perfect, while others look bad. It’s especially prominent in prints that have wording engraved or a logo embossed into it.

The causes of ghosting are pretty well known so I’ll explain it as simply as I can.

Ghosting is caused by something called resonance (vibrations). When 3D printing, your machine moves large objects at a fairly high speed.

The main causes of ghosting are:

Your extruder, metal parts, fans and all sorts can get heavy, and coupled with the fast movements result in something called moments of inertia.

Different combinations of movements, speeds and directional change, with the weight of your printers components can result in ‘loose movements’.

When there are quick directional changes with your 3D printer, these movements can cause bends and flexes in the frame. If intense enough, the vibrations are likely to leave your with imperfections on your prints, ghosting.

These type of imperfections are sometimes referred to as ‘artifacts’.

As we know, 3D printers have to be precise in the way they build up an object layer by layer, so this resonance caused by quick movements can have the effect of creating inaccuracies in your prints.

The occurrence of ghosting will be more prominent with 3D printers that have a cantilever design such as the one in the video below:

These are less rigid and so are more prone to vibration from the moments of inertia. When you use a 3D printer which has good rigidity, it can deaden the vibrations effectively.

Download this Ghosting Test from Thingiverse to find out whether you are experiencing ghosting.

This is usually the easiest and safest option to try because the only real consequence here is slower prints.

Less speed simply means a lower moment of inertia. Think of a high-speed car crash vs bumping into a car in a parking lot.

As previously mentioned, when your prints have sudden angles they have an increased likelihood to cause vibrations because the sudden movements that the printer will have to execute. When you have sharp angles mixed with a high print speed, it results in your print head having trouble slowing down.

A problem can arise with reducing printing speed however, due to the same directional changes. When the nozzle comes to these sharp angles, they tend to spend more time slowing down and speeding up in that specific area, leading to over-extrusion and bulging.

You will be able to tell using your observations if this is one of the issues that are affecting you. It’s good practice to try grab hold of components and see if they wobble.

If you use a flimsy table as a surface foundation to print on, you will worsen the vibrations.

Another thing you can do is put stiffer springs on your bed to reduce the bounce. The Marketty Light-Load Compression Springs (highly rated on Amazon) work great for the Ender 3 and most other 3D printers out there. The stock springs that come with your 3D printer aren’t usually the greatest quality so this is a very useful upgrade.

Having more rigid rods/rails can help out if you’ve identified your printer’s rigidity as the main issue. Also make sure your hotend is fitted tightly to the carriage.

Using many of these techniques together should do an adequate job of absorbing vibrations, and you will have an added bonus of making your 3D printer quieter in many cases.

Making the moving parts of your printer lighter works by making it require less energy to move, and disperses less energy when moving around the print bed. On a similar front, you can make your non-moving parts heavier so it takes more energy to vibrate in the first place.

This isn’t always an option but if you can invest in a lighter extruder this will definitely help with the issue of ghosting. Some people have dual extruder printers but don’t use both extruders, so removing one of them will help lighten the moving weight.

The video below nicely illustrates how different component weight affects the occurrence of ghosting. It’s done by changing the rods (carbon fibre, aluminium, and steel) and using the ghosting test to observe differences.

Adjust your Acceleration and Jerk Settings

Reducing your acceleration settings reduces the speed, and in turn, lowers the inertia as well as any potential wiggle.

On the opposite side, a jerk setting too low will make your nozzle stay in areas for too long, resulting in details becoming obscure as it takes too long to change directions.

Changing these settings can result in your problem being solved, but if done incorrectly, it can lead to over-extrusion at the sharp corners, similar to reducing the printing speed.

If your 3D printer has extreme acceleration curves, it can jerk around and create ghosting artefacts, so reducing the acceleration settings is a possible solution.

When your printer’s motion systems are slack, you have a higher likelihood of experiencing excess vibrations.

The belt of your printer is a usual culprit for this happening. When the belt is loose, it loses precision with printer movements so it can have an effect on resonance. The amount of stretch from a loose belt will allow the print head to move around.

It’s similar to having a rubber band, when it’s loose it’s very springy, but when you pull it tight, it keeps things together.

Eliminating ghosting can be difficult because there are many possible culprits of why it occurs. When you identify the issue, things become a lot easier to solve. It is mostly a balancing act, and it can take a bit of trial and error to see what works best for you and your 3D printer.

It can take a combination of these solutions, but once you solve the issue it will greatly improve the quality of your prints!

So eliminating ringing is mostly a balancing act, and you mostly just have to experiment to see what works best for you. Start by making sure your belts are properly tensioned.

Check for loose components such as bolts, belts rods, then start reducing printing speeds. If printing times get too high then you can adjust jerk and acceleration settings to see if you can improve printing times without sacrificing on quality. Putting your printer on a solid, rigid surface should help out a lot with this issue.

If you found this article useful and would like to read more about 3D printer troubleshooting & other info check out my article on How Loud Are 3D Printers: Tips to Reduce Noise or The 25 Best 3D Printer Upgrades You Can Get Done.