I’ve been 3D printing this same roll of 1KG PLA for a while now and I was thinking to myself, just how long does a 1KG roll of 3D printer filament last? There are clearly going to be differences from person to person, but I set out to find out some average expectations.

The average 1KG spool of filament lasts users just over a month before it needs replacing. People who 3D print on a daily basis and create larger models could use 1KG of filament in a week or so. Someone who 3D prints a few small objects from time to time could stretch a 1KG roll of filament for two months and more.

There’s some more information below which is relevant to answering this question such as the amount of common objects you can print and how to make your filament last longer. Keep reading to find out!

If you are interested in seeing some of the best tools and accessories for your 3D printers, you can find them easily by clicking here (Amazon).

How Long Does a 1KG Roll of Filament Last?

This question is quite similar to asking someone ‘how long is a piece of string?’ If you have a long list of items that you have been wanting to print and they are of a bigger size, infill percentage and you want large layers, you can go through a 1KG roll pretty quickly.

Some big projects such as costumes and props can easily use over 10KG of filament, so 1KG of filament won’t last you barely any time at all.

If you have one big print, you could technically use up a whole 1KG roll of filament in just one day, with a big nozzle such as a 1mm nozzle.

It depends on your flow rates and the models you are printing. Your slicer software will show you exactly how many grams of filament it will take to complete.

The piece below is almost 500g and lasts around 45 hours of printing. 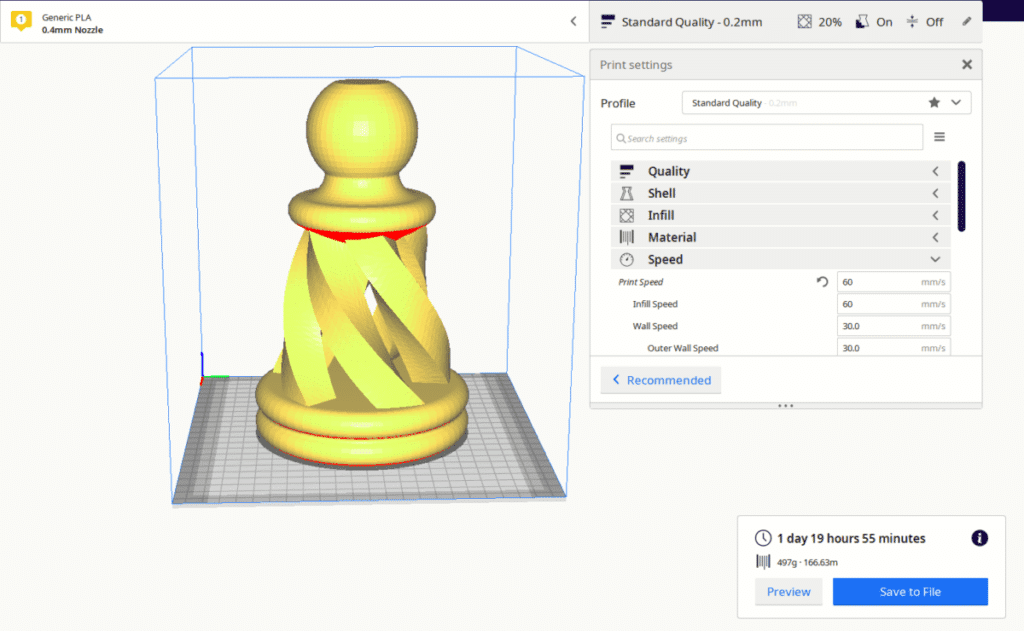 When the same piece has the nozzle size changed from 0.4mm to 1mm, we see a drastic change in the amount of printing hours to just under 17 hours. This is around a 60% decrease in the printing hours and the filament used even increases from 497g to 627g.

You could easily add settings which use tons more filament in less time, so it’s really about your flow rates out of the nozzle. If you are a low volume printer and like to print smaller items, a spool of filament can easily last you a month or two.

A high volume printer on the other hand, who likes to print bigger objects will go through that same filament in a few weeks or so.

A lot of people are involved in the D&D (Dungeons and Dragons) game, which are primarily made up of miniatures, terrain and props. For each print, it can easily take around 1-3% of your 1KG spool of filament.

One 3D printer user described that in 5,000 hours of printing in the past year, they had gone through 30KG of filament with near constant printing. Based on those numbers, that is 166 printing hours for every KG of filament.

This would measure up to about 2 and a half 1 KG rolls per month. It is a professional field that they are in so it their large filament consumption makes sense.

Using a bigger 3D printer like an Artillery Sidewinder X1 V4 (Review) compared to a Prusa Mini (Review) is going to make a big difference in how much filament you use. When you are limited in your build volume, you have no choice but to print smaller items.

How Many Things Can I Print with 1KG Spool of Filament?

Some extra perspective, you could print around 400 average sized chess pieces with a 1KG spool of filament.

If you measure how long your 3D printer filament lasts in printing hours,  I’d say on average you could get around 50 printing hours.

The best way to determine this would be to download some slicer software such as Cura and open a few models that you can see yourself printing. It will give you direct estimates for how much filament will be used.

This chess piece below in particular uses 8 grams of filament and takes 1 hour and 26 minutes to print. That means my 1KG spool of filament would last me 125 of these pawns before it ran out.

Another take away is that 1 hour and 26 minutes of printing, 125 times would give me 180 printing hours. 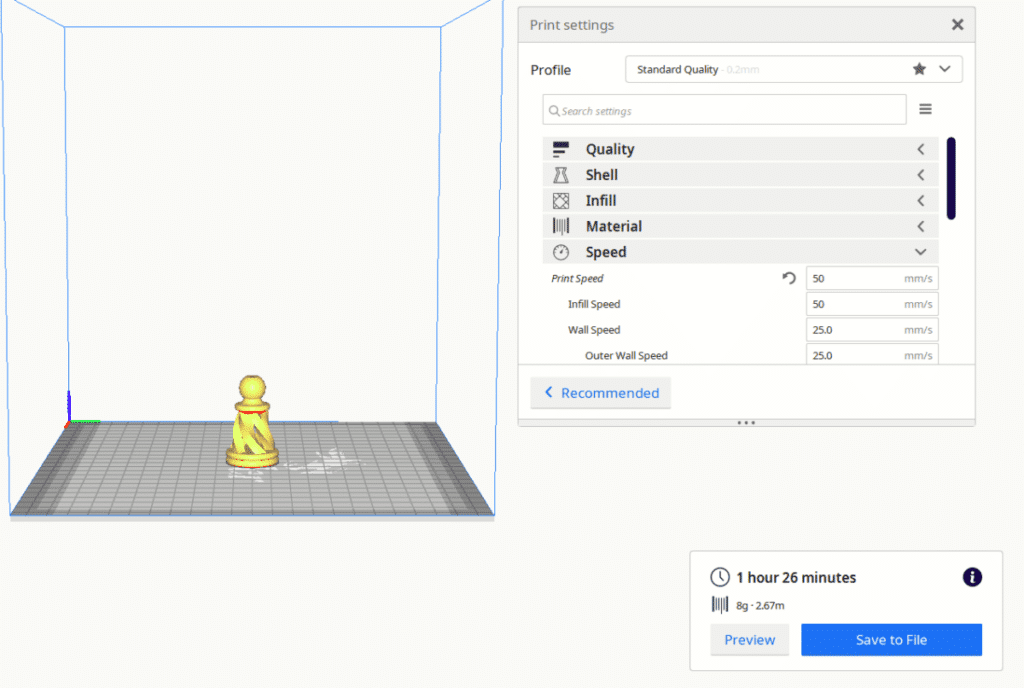 This was at a speed of 50mm/s and increasing it to 60mm/s changed the time from 1 hour 26 minutes to 1 hour 21 minutes which translates to 169 printing hours. The goal here is not about increasing or decreasing printing hours, but being able to print out more objects for the same amount of filament.

The average for a miniature is less than 10 grams per mini so you could print over 100 minis before your 1KG spool of filament will run out.

You could also technically account for prints that fail, since there’s always potential for that to happen and be of no use to you. If you’re lucky most of your failed prints happen at the initial first layers, but some prints can go wrong a few hours in!

Check out my post on Great Ways to Stop 3D Prints Moving While Printing, so your prints fail a lot less!

How Do I Make My 3D Printer Filament Last Longer?

The best way to make your rolls of filament last longer is to slice your objects in such a way that it uses less plastic. There are several ways to cut down on plastic production which over time can save you a substantial amount of filament.

Many factors affect how long a roll of filament lasts, such as the size of your prints, infill density %, use of supports and so on. As you’ll realize, a 3D printed part such as a vase or pot uses very small amounts of filament because the infill is non-existent.

Play around with the settings to lower your filament usage per print to make your filament last longer, it will take some trial and error to really get good at this.

Support material is widely used in 3D printing but models can be designed in such a way where it doesn’t require support.

You can also make use of 3D printing software to efficiently reduce support material. You can create custom supports in a software called Meshmixer, the video below by Josef Prusa goes into some nice detail.

I found out about this awesome feature by researching the Best Free 3D Printing Software, which is an epic list of slicers, CAD software and more.

Most 3D printer users will use a skirt before each print, and this makes a lot of sense so you can prime your nozzle before printing. You can remove the number of skirts you set if you do more than 2, even one can be enough a lot of the time.

If you don’t already know, skirts are the extrusion of material around your print before it gets to printing the actual model, though skirts use such a tiny amount of filament it doesn’t matter.

Brims and rafts, on the other hand, can usually be reduced or removed altogether in many cases, as they do use up more filament. They can be very useful for certain prints, so balance out the savings with the benefits carefully.

If you can figure out where you can remove them, you can save a lot of filament in the long run and a nice amount for each 1KG roll of filament.

Make Better Use of Infill Settings

There’s a massive trade-off in using high infill percentages versus 0% infill and it will allow your filament to go a long way.

Most slicers will default to an infill of 20% but many times you’ll be fine with 10-15% or even 0% in some cases. More infill doesn’t always mean more strength, and when you get to very high infill settings, they can even start to become counterproductive and unnecessary.

I printed a 3D model of Deadpool with just 5% infill using the Cubic pattern, and it’s pretty darn strong! 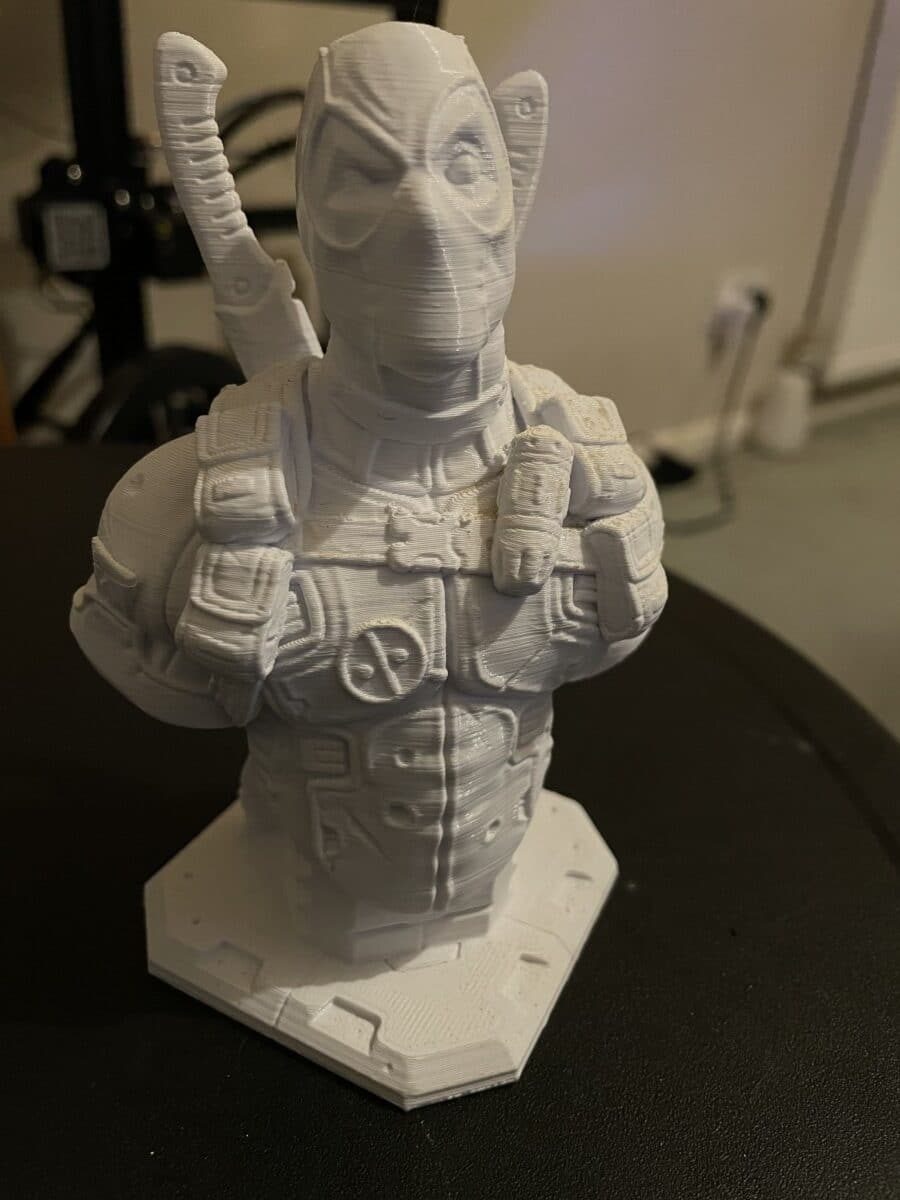 Infill patterns can definitely save you filament, the honeycomb, hexagon, or cubic patterns are usually good picks to do this. The fastest infills to print are going to be the ones that use the least material and the hexagon infill is a great example.

You’ll not only save material and time, but it’s a strong infill pattern. The honeycomb pattern is widely used in nature, main example being the honey bee.

The fastest infill pattern is probably the Lines or Zig Zag and are great for prototypes, figurines or models.

This is an obvious way to make your 3D printer filament last longer. Simply scale your objects down if they are non-functional prints and don’t necessarily need a larger size.

I understand wanting larger objects but you have to understand there will be a trade-off, so keep that in mind.

For example, if you only print items that use up 10g of filament at a time and you print twice a week, a 1KG roll of filament would last you 50 weeks (1,000 grams of filament/20g per week).

On the other hand, if you’re into projects that use up 50g of filament at a time and you print every day, that same filament is going to last you just 20 days (1000g of filament/50g per day).

Another simple way to make filament last longer is to print less often. If you print a lot of non-functional items or a bunch of items that collect dust (we’ve all been guilty of this) maybe dial it down a bit if you really want to make your filament roll to go a long way.

You might think there are drawbacks of doing this such as making weaker parts, but if you use proper methods you can actually strengthen parts as well as save filament and printing time.

How Much Filament Do You Need for a Print?

How Long in Meters/Feet) is a 1KG Roll of Filament?

If you wanted to put in a cost per meter of PLA filament, we have to assume a specific price which I can say on average is around $25.

If you love great quality 3D prints, you’ll love the AMX3d Pro Grade 3D Printer Tool Kit from Amazon. It is a staple set of 3D printing tools that gives you everything you need to remove, clean & finish your 3D prints.

It gives you the ability to: