There is a little more to infill patterns than I first realized, so I will go into some more details about the basics of each infill pattern, as well as which patterns people view as the strongest, the fastest and the all-round winner.

What Types of Infill Patterns are There?

When we look at Cura, the most popular slicing software out there, here are the infill pattern options they have, along with some visuals and useful information.

What is Grid Infill?

This infill pattern has a cross-over pattern which creates two perpendicular sets of lines, forming squares in the middle.

An example of how the Lines and Grid pattern are different is shown below, where infill directions are default at 45° & -45°

What is Triangle Infill?

This is pretty self-explanatory; an infill pattern where three sets of lines are created in different directions to form triangles.

This infill pattern has a mixture of triangles and hexagonal shapes, interspersed throughout the object. It does this by creating three sets of lines in three different directions, but in a way that they don’t intersect in the same position with each other.

What is Cubic Infill? 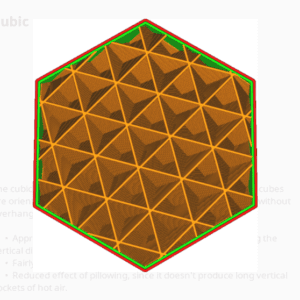 The Cubic pattern creates cubes which are titled and stacked, creating a 3-dimensional pattern. These cubes are oriented to be standing on corners, so they can be printed without overhanging internal surfaces

What is Cubic Subdivision Infill? 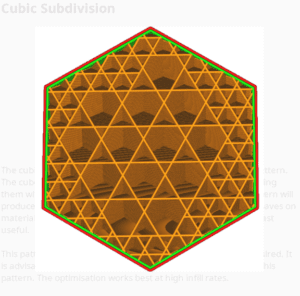 The Cubic Subdivision pattern also created cubes and a 3-dimensional pattern, but it creates bigger cubes towards the middle of the object. This is done so the most important areas for strength have good infill, while saving material where infill is the least effective.

Infill densities should be increased with this pattern because they can be really low in the mid-areas. It works by creating a series of 8 subdivided cubes, then the cubes which are hitting walls get subdivided until infill line distance is reached.

What is Octet Infill? 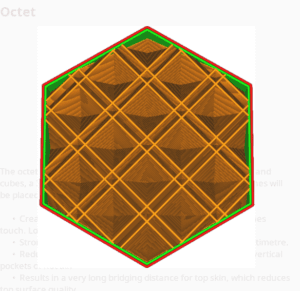 The Octet infill pattern is another 3-dimensional pattern which creates a mix of cubes and regular tetrahedra (triangular pyramid). This pattern produces multiple infill lines adjacent to each other every so often.

What is Quarter Cubic Infill? 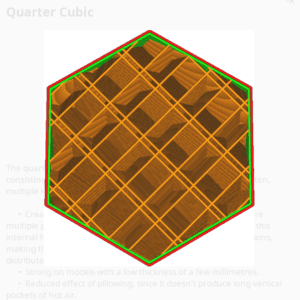 The Quarter Cubic is a little more complex in explanation, but it’s quite similar to the Octet Infill. It’s a 3-dimensional pattern or tessalation (close arrangement of shapes) consisting of tetrahedra and shortened tetrahedra. Just like Octet, it also places multiple infill lines adjacent to each other every so often.

What is Concentric Infill? 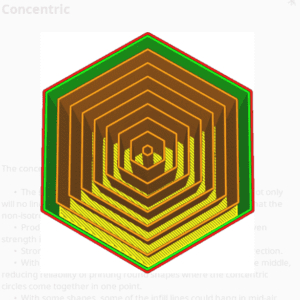 The Concentric infill pattern simply creates a series of inner borders parallel to the perimeter of your object.

What is Zigzag Infill? 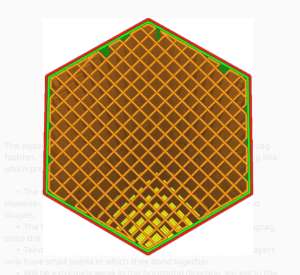 The Zigzag pattern simply creates the very pattern as it’s named. It’s very similar to the Lines pattern but the difference is, lines are connected in one long line, resulting in less flow interruptions. Mainly used in support structures.

What is Cross Infill?

The Cross infill pattern is an unorthodox pattern which creates curves with spaces in between, replicating cross shapes inside an object.

What is Cross 3D Infill? 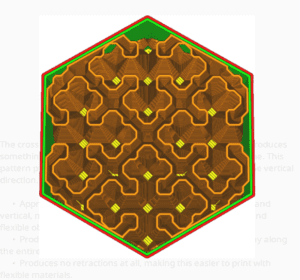 The Cross 3D infill pattern creates those curves with spaces in between, replicating cross shapes inside the object, but also pulses along the Z-axis making it weaker in the vertical direction. 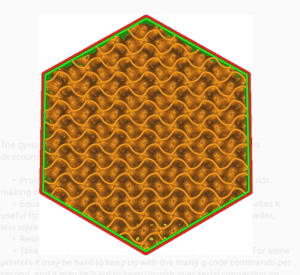 The Gyroid infill pattern creates a series of waves in alternating directions.

What is the Best Infill Pattern for Strength (Cura)?

You’ll find many people arguing over which infill pattern is the best for strength. These infill patterns consist of high strength in multiple directions, usually being categorized as 3-dimensional patterns.

The best candidates that people have thrown out there are usually:

Luckily it’s a quite short list so you don’t have to go through too many to find your perfect fit. I’ll go through each strength infill pattern to help you decide which to go for. Honestly, from what I’ve researched, there isn’t too much of a difference in strength between these but one does have the upper hand.

Cubic is great because of its even strength is from all directions. It’s known as a strong infill pattern by Cura themselves and has a number of variations showing, just how useful it is as an infill pattern.

For pure structural strength, Cubic is very well-respected and popular for 3D printer users out there.

It can suffer from overhang corner warping depending on your model, but generally it prints very smooth.

Where gyroid prevails is its uniform strength in all directions, as well as the fast 3D printing times. The ‘crush’ strength test by CNC Kitchen showed the Gyroid infill pattern having a failure load of exactly 264KG for a 10% infill density in both the perpendicular and transverse directions.

In terms of printing time, there is around a 25% increase compared to the Lines pattern. Cubic and Gyroid have very similar printing times.

It does use more material than Cubic but it’s more prone to printing issues such as layers not stacking.

The high shear strength, resistance against bending and low weight of this infill pattern make it an ideal choice over most other patterns. Not only does it have high strength, it’s also great for flexible prints.

It showed that the Gyroid pattern is great at absorbing stresses, at 2 walls, 10% infill density and 6 bottom and top layers. He found that it was stronger, used less material and printed faster.

The choice is yours, but I would personally go for the Cubic pattern if I want maximum load-bearing strength. If you want strength, along with flexibility and quicker prints, Gyroid is the pattern to go with.

There are factors other than infill pattern for maximum strength. CNC Kitchen found the main factor being the number of walls and wall thickness, but it still has a signficant influence.

This hypothesis also has more evidence behind it with an article written in 2016 on the Effects of Infill Patterns on Tensile Strength. It explains that different infill patterns had a maximum of 5% tensile strength differences meaning that the pattern alone didn’t make too much difference.

Where the main difference came in terms of infill was on the infill percentage. Although, tensile strength isn’t the only strength sought after so this doesn’t mean infill patterns can’t make a difference of more than 5% functionality-wise.

What is the Fastest Infill Pattern for Speed?

If we are looking at the best infill pattern for speed, the clear factors here are which patterns have the most straight lines, less movement and least material used for the print.

This is a pretty easy one to determine when we think about the pattern choices we have.

The best infill pattern for speed is the Lines or Rectilinear pattern, which is the default infill pattern in Cura. Patterns with the most directional changes usually take longer to print, so straight lines print the fastest with great speed.

We wouldn’t want to simply use the least material and have an object that falls apart easily.

Tests have actually been carried out on this parameter, where CNC Kitchen found that the normal Rectilinear or Lines pattern has one of the best strength per weight ratio and uses the least amount of material. The Cubic Subdivision pattern is another contender for using the least material. It creates high density infill around the walls and lower in the middle.

It’s a perfect pattern to have as a default for your prints, other than when you have a specific purpose for functionality and strength. Not only does the Lines pattern or Cubic Subdivision print very fast, it uses a low amount of infill and has good strength.

What is the Best Infill Pattern for Flexible 3D Prints?

The best infill patterns for TPU and flexibles are:

Depending on your model, there will be an ideal pattern for your flexible 3D prints.

As previously mentioned, the Concentric pattern works best at an infill density of 100%, but mostly for non-circular objects. It has fairly good vertical strength but weak horizontal strength, giving it the flexible characteristics

The Cross and Cross 3D patterns have even pressure on all sides but the Cross 3D also adds in the vertical direction element, but it does take longer to slice.

Gyroid is great when you are using lower density infills and is useful for a few reasons. It has fast printing times, great resistance to shearing but is less flexible overall, compared to the other flexible patterns.

If you are looking for the best infill pattern for compression then Gyroid is one of the best choices.

How Much Does Infill Density or Percentage Matter?

Infill density affects a number of important parameters for your 3D printed part. When you hover over the ‘Infill Density’ setting in Cura, it shows that it affects Top Layers, Bottom Layers, Infill Line Distance, Infill Patterns & Infill Overlap.

Infill density/percentage has a pretty significant impact on part strength and printing time.

The higher your infill percentage, the stronger your part will be, but at infill densities over 50%, they become a lot less significant in terms of adding extra strength.

The difference between infill density that you set in Cura has a big difference in terms of what it’s changing in your part structure.

A larger infill density means your infill lines will be placed closer together, which means more structures are working together to give a part strength.

You can imagine that attempting to break apart with low density would be much easier than one with high density.

It’s important to know that infill density varies widely on how it affects a part due to differences in infill patterns.

Basically, a change of 10% infill to 20% infill for a Lines pattern isn’t going to be the same as the same change with a Gyroid pattern.

Most infill patterns have similar weight with the same infill density, but the Triangle pattern showed an almost 40% increase in overall weight.

That’s why people who use the Gyroid infill pattern don’t require such high infill percentages, yet still get a respectable level of part strength.

Low infill densities can result in problems such as walls not connecting to the infill and air pockets being created, especially with patterns that have many crossings.

You can get under extrusion when one infill line crosses another line because of flow interruptions.

Cura explains that increasing your infill density has the following effects:

So, infill density definitely matters when we are looking at the strength, material usage and timing of our prints. There is usually a good balance to strike between infill percentages, which is anywhere from 10%-30% depending on what you intend to use the part for.

Aesthetic or parts made for looking at require a lot less infill density because it doesn’t require strength. Functional parts require more infill density (up to 70%), so they can handle the load-bearing over a long period of time.

Here’s an example of the Gyroid infill pattern in a clear PLA 3D print. One user said they also use Gyroid with a 15% infill density.

Clear pla with infill makes for a cool pattern from 3Dprinting

Check out the video below for a great visual on 3D printing transparent filament.

link to How to Weather 3D Prints

Some people have wondered how to weather their 3D prints to get that older style effect that looks great in some models. This is great for cosplay models like helmets, armor, weapons, and more. It...

Learning how to make 3D prints look like metal is a useful technique that people want to do, but aren’t sure how to best do it. This article will take you through some techniques that you can use...