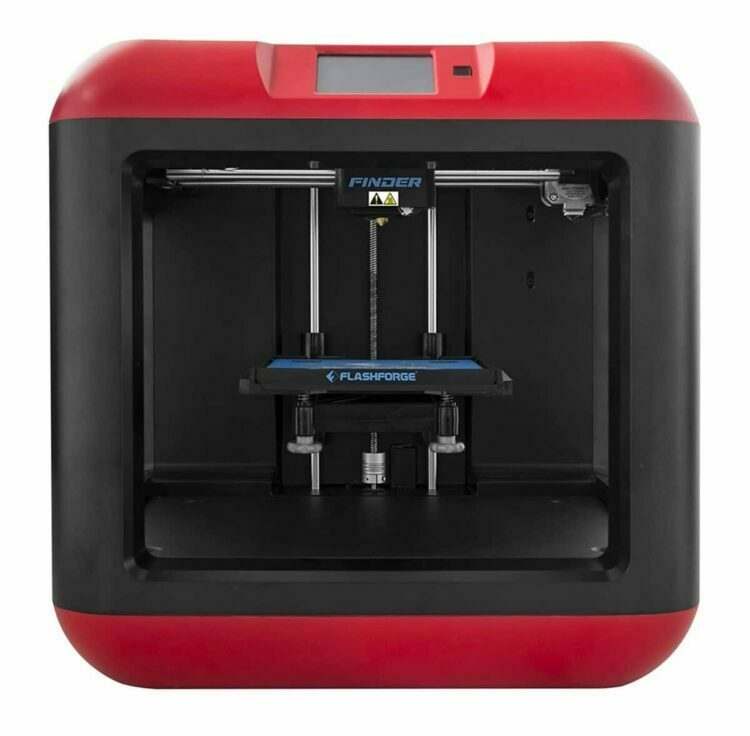 Looking through many lists and reviews for the Flashforge Finder, you can see that it is a recommended choice for beginners, novices and younger people who are interested in the 3D printing field.

The Flashforge brand is well-respected, but they definitely have had some ups and downs throughout their history with products and customer services.

This review of this 3D printer will attempt to put together some important information about what you’d want to know before purchasing it. You’re getting a list of features, as well as benefits, downsides, specs and what other people are saying about it.

Keep reading on if you are interested in adding this 3D printer to your 3D printing journey.

The Flashforge Finder is a fully-enclosed 3D printer which has a curved design to ensure maximal safety and comfort. You don’t have sharp edges or corners, no high temperature components, barbed wires or any type of unsafe feature.

It’s made to be used by novices and kids so there is very little worry about not getting a safe 3D printing experience. It has a sturdy plastic alloy construction which gives the 3D printer the ability to produce stable prints.

The specialized air distribution structure gives your filament an all-round air flow to ensure proper filament temperature after material is extruded. When you don’t have good air flow to your filament, it can cause it not to set quick enough for the following layer to be laid upon in a sturdy fashion.

Rather than the usual clip-in system with most 3D printers, this 3D printer has a nice sliding mechanism to remove the build plate. It allows for easy 3D print removal after a model has finished. Damage can be minimized with this type of plate as well as offsets.

This is a non-heated build plate which works well for PLA filament and is another great element for safety.

The responsive touchscreen on this machine is smart, easy to operate and also comes in 16 languages so you can feel at home! It’s a 3.5″ screen with large icons that are easily readable and is simple enough for anyone to use without issues.

You also get an instant preview of 3D model files so you can have a nice visual of your print before it begins the printing process.

For the people who are thinking about energy costs, 3D printing doesn’t use a lot of power but it can build up over time. Luckily for you, this 3D printer is a low energy machine weighing in at just 65W.

You can actually get 15 hours of continuous 3D printing for just 1KW of electricity.

With some other 3D printers out there, they can get very loud up to a point where you can hear it from a few rooms away. The Flashforge Finder is different in the fact that it works at 50 decibels.

It’s ideal for quiet working environments so it doesn’t disturb the surroundings too much.

You have the freedom to use some different types of data connectivity, from a U-stick to Wi-Fi & through a USB cable. It’s nice to have those extra options when you want to 3D print some designs or implement other tasks in your 3D printer.

It has an intelligent assisted leveling system which gives you a more precise and simple calibration process. You’ll be directed through the calibration detection system where you tighten or loosen leveling screws until you can hear a beep sound.

It detects the distance between your nozzle and build plate to make sure your leveling is in the correct position. After going through each location, your bed should be fully leveled. Having that extra help with the leveling process is great, rather than doing it all yourself.

This is a useful feature that pauses your 3D printer when it senses that filament is no longer being extruded. When you misjudge or forget how much filament you have on your spool and it runs out, this feature saves your print altogether.

It allows you to change over the filament and continue the print in the last location that was set.

Flashprint is a simple slicing software which has a pretty small learning curve with a user-friendly interface that makes operation easy.

You can create smart supports, provide treelike and linear supports, which can then be modified manually to your liking.

The size of the build plate can be quite limiting if you want to branch out to bigger projects. It can be overcome by using software which splits parts which can later be joined together.

The in-built slot for the spool of PLA is proprietary and only holds 0.67Kg of filament, another limiting factor.

The customer service has had faults in some cases, taking a while to get back to some people about their troubleshooting issues. If you purchase through the official FlashForge page fulfilled by Amazon, you’ll be supported by their customer service.

On the other hand, if you purchase from a distributor or reseller, their policy is that they are now responsible for your direct customer service and technical support.

Doing things like this can definitely cause confusion if not stated clearly to customers beforehand. Their customer support email address isn’t very professional though, just being a series of numbers followed by @qq.com ([email protected]).

I’ve seen they also have an email called [email protected] which may have been updated because of the previous confusion.

Bed adhesion could be better since you’ll have to level the bed well each time and just glue probably won’t be enough.

Some people have had trouble with bed leveling, but once you have the technique down it becomes quite easy. The trick is to not loosen or tighten the screw too much, but to have it in the middle and adjust it after you hear the beeping sound along with a visual LCD indicator.

The guides for this 3D printer have been reported to not be very clear in instruction, which has been supported by YouTube videos and other user reports. I definitely recommend finding a simplified tutorial video going through the setup process so you don’t miss anything.

There is a more detailed guide that you can get from customer service which takes you through the steps properly. You may have to email customer service to get this, as I’m not sure if they have started sending this out with each FlashForge Finder 3D printer.

What Comes with the Flashforge Finder?

Most of the reviews of the Flashforge are highly rated, but there are definitely issues that people have gone through as a result of the unclear communication.

Whether from not getting quick responses for troubleshooting issues, bad manuals for setting up the printer or situations where customer service just didn’t step up to the plate.

The most critical review of the Flashforge was down to their customer service not recognizing a warranty because it was bought from Amazon because it wasn’t part of their authorized sellers list. The next section below will detail where you should buy them from.

The user ended up having to pay for replacement parts themselves taking a month to arrive, which still unfortunately ended up not fixing the issues.

On the other end of the review spectrum, it had high praises for the customer service when it was received, and they were printing great quality prints within an hour of unboxing the 3D printer.

Even their young child could 3D print some objects under supervision. They did run into some issues a few days after printing, but this was quickly corrected with guidance from customer service to clear a clog from the nozzle and re-calibrating the Z-axis.

One user loved how the setup process was very easy and detailed how they haven’t run into any problems with it. Even though the 13cm cube of space is limiting, they use Microsoft 3D Builder to split pieces then rejoin them after.

For the most parts, 3D prints are fairly compact and small so you shouldn’t run into issues like this too often.

One user had the unfortunate circumstance of their Flashforge 3D printer bricking after a firmware update. The screen just wouldn’t go through to the main menu, and doesn’t respond even after resetting it multiple times.

When you are using a 3D printer, which already has its own problems things like this aren’t ideal at all.

Where to Buy Flashforge Products

Exclusive lifetime technical support and a 6-month manufacturer’s warranty is provided by Flashforge USA as long as it is purchased through Flashforge authorized resellers an Flashforge USA direct.

Unfortunately, Amazon isn’t on the Flashforge authorized sellers list according to their official website, so we shouldn’t buy it from there.

You’ll get troubleshoot support an other services based out of facilities in Los Angeles and California.

Despite its ups and downs, when things are done correctly, the Flashforge Finder is a top-class 3D printer at an entry-level price. The safety features and functionality are the main unique things that make this 3D printer great.

Being able to find such a great range of features for a low price aren’t common, so I can safely recommend the Flashforge Finder for your 3D printing needs.

You’ll need to get past a few limitations such as the build size, and making sure you are in a good position to receive proper customer service. I’d also make sure you get a detailed manual or video tutorial for setting up this 3D printer.

Once you have a smooth initial setup process, you should be getting some great quality prints, in a safe and quiet environment for years to come.