I’ve seen many complaints from users about filaments getting tangled, and it’s happened to me on a few occasions. I decided to write this article detailing how you can untangle filament from your 3D printer, as well as other related issues.

There’s some useful information that you’ll want to know about filament getting tangled, so keep reading to solve this problem.

Table of Contents Show
1 Can Filament be Tangled From the Factory?
2 How to Untangle & Unwind Filament – PLA & More
3 How to Fix Filament Spool Not Spinning
3.1 1. Attach Spool Holder In Line with the Extruder
3.2 2. Print and Use a Filament Guide
3.2.1 User Experiences
4 How to Straighten Filament
5 How to Fix Filament Coming or Jumping off the Reel
5.1 Use Filament Guide
5.2 Add Cardboard Discs at the Boundary
5.3 Use Filament Spool Holder

Can Filament be Tangled From the Factory?

Filament usually gets tangled due to user error with letting the spool of filament unwind and things get crossed over. You want to make sure you handle your filament properly when switching spools. It’s easy for you to create tangles if you try to wind up loose filament incorrectly.

You can make use of the holes or gaps within your spool to secure the spool of filament. There needs to be tension on the filament so your filament doesn’t move freely, creating a situation where tangles can happen.

Some people have even drilled their own holes into the filament spool, or simply 3D printed clip-on filament holders.

Here’s an example of how a filament tangle looks from one user. They explain that almost all filament tangles are the result of improper handling by the user. In terms of how spools are wound, it’s not usually possible to be wound with a tangle in it unless it came loose during winding.

One user did mention that some of the more inexpensive filament manufacturers had issues in the past of poorly wound filaments, but I think they have improved their manufacturing techniques in modern times.

Another user said they had their filament tangle on a brand new roll of filament that they handled properly. They wasn’t sure how it happened, so it could have been from a less experienced filament manufacturer.

I’d recommend going with a more well-known brand that use up-to-date machines to wind their filament.

One filament that you can go with is eSUN Silk PLA Filament from Amazon. eSUN was established back in 2002 and is one of the global professional 3D printer filament manufacturers out there.

Among stating they have no tangling in their filament, they also have little odor, no clogging, minimal warping, and a tolerance of ±0.3mm. Many reviewers are very happy with this filament, saying that it produces smooth 3D prints and being one of the best filaments they have used.

The best way to untangle filament is to simply wind the filament back so you can loosen the coils around the spool, then take out another set of about 10 coils and wind it back. Make sure you have actually gone past the knots or tangles before respooling the filament. After this, you want to secure the filament end.

Check out the video below to see how you can untangle knots in your spools of filament. It’s a great way to fix a badly wound filament, so you can stop filament getting stuck on the spool.

Many users claim that this is the best and probably the only suitable method to detangle filament.

You can also check out this video by Thomas Sanladerer who shows you a technique where you unspool about 20 coils and pull the filament out of the spool so you can rewind it easier.

How to Fix Filament Spool Not Spinning

Your filament spool not spinning is one of the most common issues and can be resolved with some simple techniques. Some techniques can be applied while you can use some additional tools as well if things are not going well.

1. Attach Spool Holder In Line with the Extruder

Attaching a spool holder in the wrong place increases the distance between spool and extruder which provides space for the filament to move freely, lose tension, and thus making it difficult for the extruder to pull.

2. Print and Use a Filament Guide

Many users have suggested using a “filament guide” as it resolves all kinds of related issues especially if the filament spool is not spinning. A filament guide is a small 3D printed tool that is attached to a 3D printer, near the spool.

There is a hole in it that lets the filament pass and not only keeps it in line but makes it easy for the spool to spin and the extruder to pull the filament. 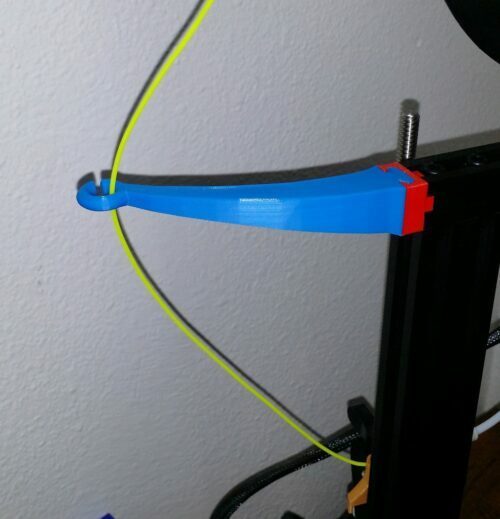 You can find filament guides of different types on Thingiverse such as:

Some users have shared their experience stating that a filament guide by Filboyt works best in such scenarios but you should change it in a year or two because constant printing can create a groove in the guide due to friction of filament.

This groove can sometimes pinch the filament and ruin the whole process.

Other users have recommended printing and using filament guides with a roller or pulley because such guides have a wheel with a bearing. Some users have suggested putting craft tape on the guide’s hole or ring as soon as you print the guide.

Both these practices will not only make it easy for the filament to glide but prevent grooves or pinching as well.

How to Straighten Filament

To straighten your 3D printing filament, you can use a Filament Straightener tool that can be 3D printed. One of them uses various tools like bearings, bolts, washers, nuts, and screws. Once you 3D print the main STL model, you put the rest together and you have a device that can straighten filament.

The last few meters is the usual reason why you might want to straighten out your filament.

You can find various kinds of professionally created filament straighteners on Amazon and Thingiverse such as:

Check out the video below for a visual demonstration of straightening filament using the LMGTS Filament Straightener.

How to Fix Filament Coming or Jumping off the Reel

Using a filament guide to fix filament coming off the spool is a good technique that has worked for many users. There are a few different forms of filament guides that you can use, some 3D printed, and some bought professionally.

You can easily 3D print a filament guide like the Filament Guide by Filboyt. Many users have appreciated the design and said in the comments that the design works best for their 3D printers and they are getting efficient results as well.

There was a user who claimed that his guide broke down within 15 days and ruined his whole print. After analyzing the problem, it was concluded that he attached the guide i the wrong place and the filament was putting a lot of pressure while moving.

Add Cardboard Discs at the Boundary

Many users have shared their experiences and it can be concluded that using discs-like boundaries is considered the most efficient solution to filament coming off the reel. All you need is to get a hard paper, an old file, or an empty box. Some people even use the box that comes as the covering of a filament spool.

Check out the video below for a visual demonstration of the whole process.

Some users claim that they are using a special filament spool holder that is specifically designed to deal with this problem. You can download the files with just a single click.

The holder has a roller on the upper side and two at the bottom directly in contact with the spool walls. This makes it easy for the spool to rotate while not allowing any gap or space for the filament to come out and jump off the spool’s walls.

The only limitation of this holder is that it only fits with 1KG filament spools and the spool should have hard boundaries instead of soft cardboard. You can have a look at the visual demonstration, the design, and it’s working in the video below.

The height of the spool holder is about 305mm which means that you will need a bigger 3D printer to print this design.

link to What Do You Need for 3D Printing?

3D printers need certain materials and parts to work properly, but people wonder what exactly they need. This article will get into what you need for 3D printers, both filament and resin...

The Ender 3 is a great 3D printer but sometimes gives problems such as X-axis problems. Many users have been looking for fixes for certain X-axis problems, so I decided to write this article to help...