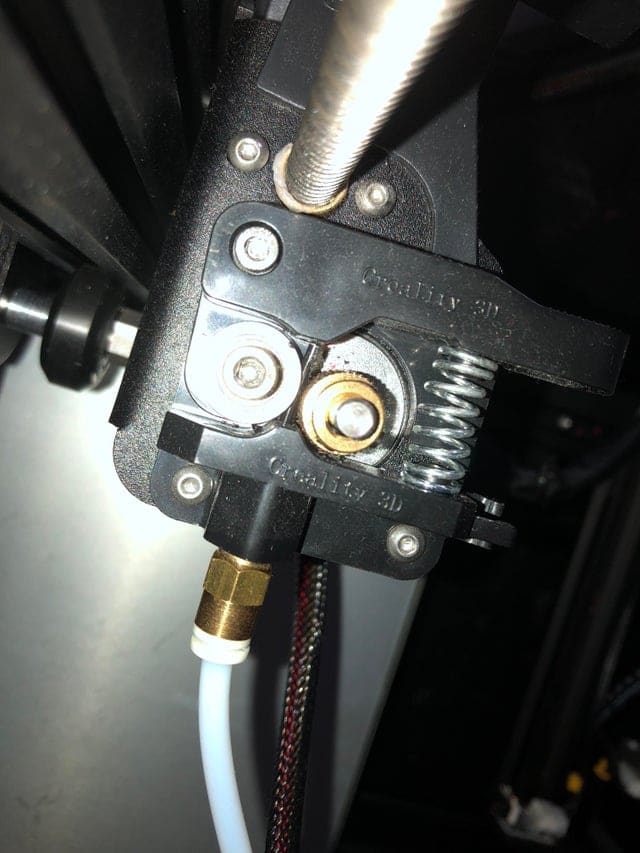 One of the most frustrating things in 3D printing has to be experiencing broken filament in your 3D printer’s extruder and not being able to get it out. You might have tried many solutions, but they just aren’t working.

That’s the reason I wrote this article today to help you solve this problem and learn how to remove the broken filament from your 3D printer.

The best way to remove the broken filament from your 3D printer is to take off the PTFE tube and pull the filament out manually. This should be easy to remove because the filament is still attached through the Bowden tube, but if not, it should be loose in the extruder, which can be removed with tweezers.

That’s the basic answer, but there is a little more to learn about why this happens in the first place, more in-depth solutions, and prevention methods for the future, so read on.

Causes of Filament Getting Stuck In Tube or Broken:

Some of the primary reasons that cause the filament to get brittle or broken in the tube are described below. Knowing the causes will help you to prevent this problem in the future.

The spool of the filament has to bear a lot of constant pressure of being straight because it was curled around the reel for a long time.

This is just similar to when you open your fist after being clenched with power, you will find that your fingers look curled more than usual. With the passage of the time, the filament can be snapped off in the tube because of the extra pressure on the filament.

Most of the filament broke during print that is placed in the spool or has a lack of flexibility can be affected in the same way due to extreme stress. The parts of the filaments that are held straight have higher chances of getting broke.

There are plenty of filament brands available in the market, some will have more flexibility than others depending on the manufacturing process.

New and fresh filaments show a high degree of elasticity allowing them to bend more easily but over time they begin to become more prone to breakage.

Looking at the quality of a big print, poor quality filaments that do not take care of uniform production are more likely to suffer the problem of getting broke.

Expensive filament is not always the best, you should choose a filament by evaluating the online positive reviews, comments, and rankings.

Filaments usually absorb moisture that’s why it is recommended by the experts to keep the filament at a place where the absorption amount can be reduced.

Many 3D printer users prevent their filament from breaking by placing it into a large plastic bag that has a valve to pull out the air just like a vacuum.

This is a great thing because it mitigates the chances of getting filament broke below extruder gear.

How to Remove/Unjam Broke Off Filament on 3D Printer?

There are two main methods to remove the broke off filament on the 3D Printer. The choice of method depends on the spot where it broke.

If the filament broke just along the edge of the PTFE tube, you should go for the first method where you try to remove the broken filament through the heat.

But if the filament spread 0.5 to 1 cm, try to reach the extruder filament pulley using the second method in which we remove the broken filament from the nozzle using tweezers.

Take Off the PTFE Tube and Pull it Out Manually

Depending on your situation where the filament is broken, remove the Bowden from the print head only, or on both sides. Then heat up the nozzle to 200° and pull out the filament. That’s it, no need to do more.

You should first take the clips off the Bowden tube from both ends, then you can manually push or pull the filament out enough to get a firm hold of, then remove it.

Depending on how deep the filament is in, you may need to do some extra work.

You can remove the filament manually using any tool such as another piece of filament or a thin wire. The tool should be of 5 to 6 cm in length and 1 to 1.5 mm thin. Now:

Push the tool you have chosen from the top side of the extruder passing it through the extruder on the top of the broken filament.

Keep on pushing the tool until you see that all the broken filament has extruded and the nozzle is completely clear.

How to Remove Broken Filament from Ender 3

The Ender 3 is a well-known and reputable 3D printer that can be used by almost anyone, having amazing printing features without any hassle. It is popular because it is affordable, versatile, and highly customizable.

However, if you are new to Ender 3, the first thing people usually ask is how to remove the filament from Ender 3.

The easiest and most efficient way to get this job done properly is described below. If the filament broke in Bowden tube/extruder Ender 3, then removing it requires a lot of care.

At first, you will need to heat your 3D printer’s nozzle temperature to the usual printing temperature of the filament in the Ender 3.

You can set your temperatures within the 3D printer’s control panel.

Tap on the “Temperature” tab in “Control Settings” and then click on the “Nozzle” button and set temperature.

Wait till the hot-end reaches the desired temperature.

Now squeeze the Extruder lever to the release the grip on the filament and pull out the first half of the filament if needed.

Next, you can unscrew the PTFE tube attachment that goes into the extruder with the gears, then pull out the other half of filament.