3D printing has many amazing capabilities that people can make use of, one of them is making an STL file and 3D model from just an image or photo. If you are wondering how to make a 3D printed object from a picture, you are in the right place.

Keep reading through this article for a detailed guide on how to create your own 3D model from just a picture.

Can You Turn a Picture Into a 3D Print?

It is possible to turn a picture into a 3D print just by inserting the JPG or PNG file into your slicer like Cura and it will create a 3D printable file that you can adjust, modify, and print. It’s advisable to print these vertically standing to capture the detail, and with a raft underneath to hold it in place.

I’ll show you the very basic method to turn a picture into a 3D print, though there are more detailed methods that achieve better results which I’ll describe further in the article.

Firstly, you want to find an image which I found in Google Images.

Find the image file in the folder you placed it in then drag the file straight into Cura.

Set the relevant inputs as you wish. The defaults should work just fine but you can test these out and preview the model. 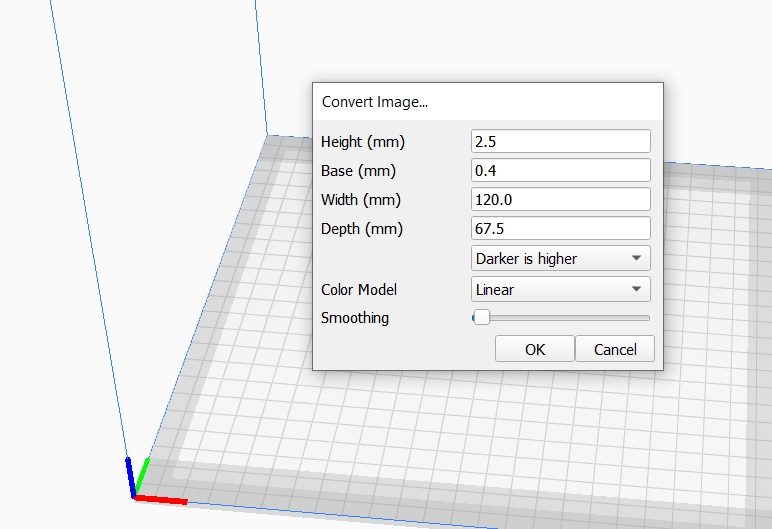 You’ll now see the 3D model of the image placed on the Cura build plate. 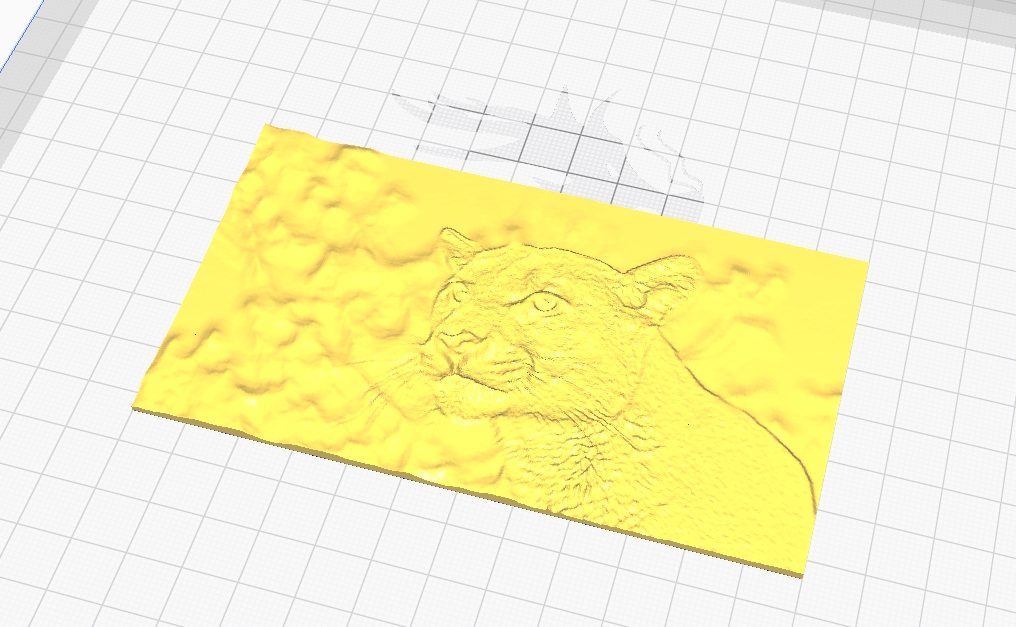 I’d recommend standing the model up vertically, as well as placing a raft to secure it in place as shown in the Preview mode in the picture below. When it comes to 3D printing and orientations, you get more accuracy in the Z-direction as opposed to the XY direction.

This is why it’s best to 3D print statues and busts where the details are created in line with height rather than horizontally. 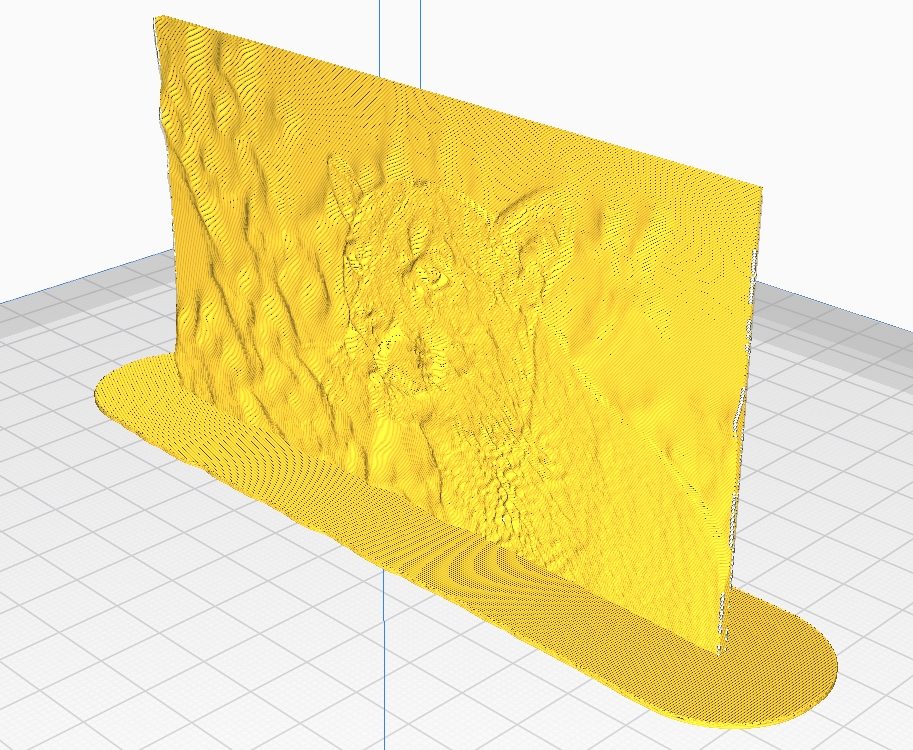 Here is the final product printed on an Ender 3 – 2 hours and 31 minutes, 19 grams of white PLA filament. 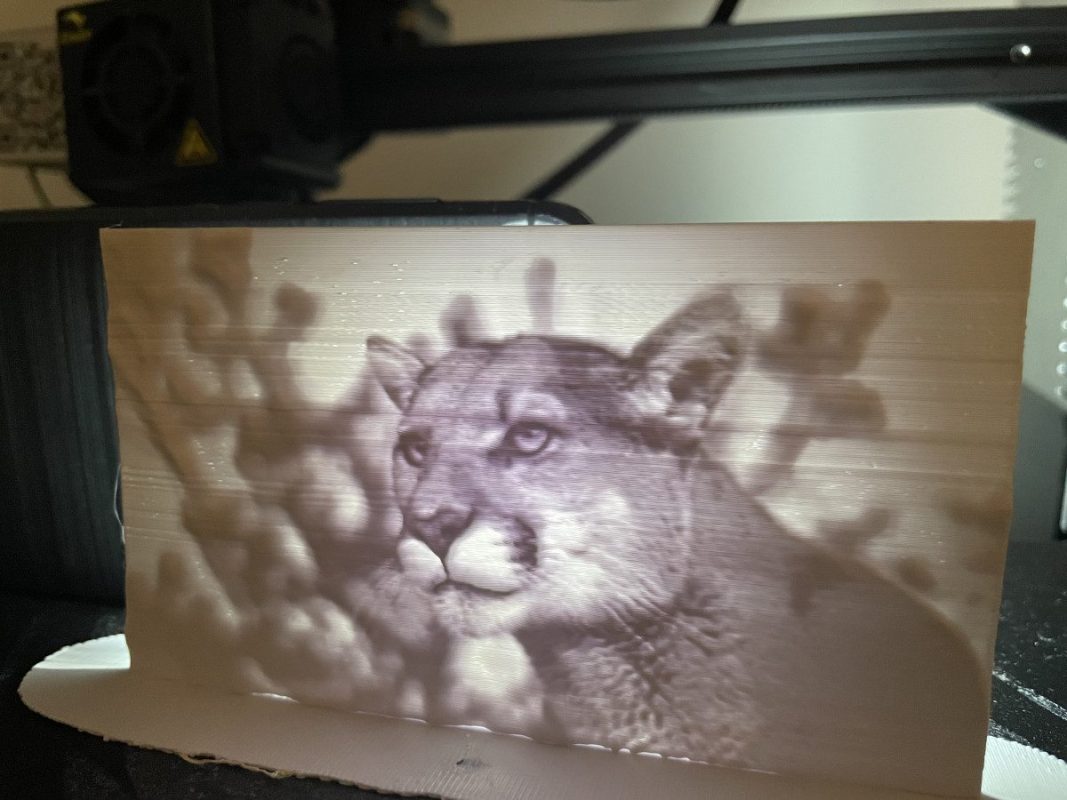 To make an STL file from an image, you can use a free online tool like ImagetoSTL or AnyConv which processes JPG or PNG files to STL mesh files that can be 3D printed. Once you have the STL file, you can edit and modify the file before slicing it for your 3D printer.

Another technique you can do to make a more detailed 3D print which has the outlines of your model is to make a .svg file in the exact shape you want to create, edit the file in a design software like TinkerCAD, then save it as a .stl file which you can 3D print.

This .svg is basically a vector graphic or an outline of a picture. You can either download a common vector graphic model online or create your own model by drawing it on a piece of software like Inkscape or Illustrator.

Another cool method to turn a single image to a 3D model is to use a free online tool like convertio which processes images to an SVG format file.

Once you have the outline, you can adjust the measurements in TinkerCAD to how high you want it, to recess or extend parts and plenty more.

After you have done your modifications, safe it as an STL file and slice it as usual in your slicer. You can then transfer it to your 3D printer via SD card as usual and hit print.

The printer should then turn your picture into a 3D print. Here’s an example of a user converting SVG files to STL files with the help of TinkerCAD.

Using resources and software programs that you can find online for free, you can convert an image in JPG format to an STL file.

First, you need the image itself. You can either download one from the internet or create one yourself, e.g.  creating a 2D floor plan using AutoCAD software.

Next, search for an online converter on Google, e.g. AnyConv. Upload the JPG file and press convert. After it is done converting, download the subsequent STL file.

While you can directly export this file to a suitable slicer to obtain a gcode file that you can print out, it is advisable to edit the file.

You can either use one two popular software programs, Fusion 360 or TinkerCAD to edit the STL file. If your image is less complex and has basic shapes, then I’d suggest that you go for TinkerCAD. For more complex images, Autodesk’s Fusion 360 will be more suitable.

Import the file to the relevant software and begin editing the image. This basically involves a couple of things including, removing parts of the object that you wouldn’t want to be printed out, changing the thickness of the object, and checking all the dimensions.

Finally, save the edited design of your object as an STL file that you can slice and print out.

I found this YouTube video which looks very useful when converting JPG images to STL files, and editing in Fusion 360 for the first time.

If you prefer using TinkerCAD instead, then this video will take you through the whole process.

How to Make a 3D Model From a Photo – Photogrammetry

To make a 3D model from a photo using photogrammetry, you’ll need a smartphone or camera, your object, some good lighting, and the relevant software to put the model together. It requires taking several pictures of the model, inputting it into a photogrammetry software, then fixing any errors.

Photogrammetry involves taking a lot of pictures of an object from all different angles and transferring them to a photogrammetry software on your computer. The software then creates a 3D image from all the images you have taken.

To start, you will need a camera. An ordinary smartphone camera will suffice, but if you have a digital camera, that will be even better.

You will also need to download a photogrammetry software. There are multiple open source software that you can download e.g. Meshroom, Autodesk Recap and Regard 3D. If you are a beginner, I’d recommend Meshroom or Autodesk ReCap which are pretty straightforward.

A powerful PC will is also be essential. These kinds of software put quite a load on your computer when creating a 3D image from photos. If you have a computer with a GPU card that supports Nvidia, it will come in handy.

After deciding on the object you want to turn into a 3D model, position it well on a level surface before you start to take photos.

Ensure that the lighting is crisp, for the results to turn out nicely. The photos should not have any shadows or reflective surfaces.

After setting up the software, drag and drop the images there. The software automatically detects the type of camera you use for it to correctly carry out the right computations.

The software will take some time to create the 3D model from the pictures, so you have to be patient. After it is done, you can export the 3D model in STL format to your desired slicer.

After slicing the files, you can transfer them to a USB flash drive or SD card. Input the device used to transfer to your printer and print out the 3D model of your photo.

For a more detailed explanation of this process you can take a look at this YouTube video.

You can also look at the video below to get a more detailed explanation of using the Autodesk ReCap Pro software to create a 3D model from photos.

There are other software applications out there that do similar things:

How to Make a 3D Lithophane Model From a Photo

A lithophane is basically a molded photo that has been created by a 3D printer. You can only see the image that has been printed once you place it in front of a light source.

Making a 3D Model lithophane from a photo is a fairly simple procedure. First, you’ll need a photo. You can choose a family portrait you have saved on your desktop, or just download any other free-to-use photo online.

Search for an image to lithophane converter online like 3DP Rocks. Upload the photo you want to convert or simply drag and drop it to the site.

Choose the type of lithophane you would like the photo to be converted to. The outer curve is mostly preferable.

Go to the settings tab of your screen and adjust accordingly for your model to turn out perfectly. The settings allow you to adjust parameters such as the size, thickness, curve vectors per pixel, borders, etc. of your 3D model.

For the image settings, the important thing is to put the first parameter to positive image. The other settings can be left as default.

Ensure that you go back to the model and hit refresh for all the settings to be saved.

Once you are done, download the STL file. After downloading it, import it to the slicing software you are currently using, whether it’s Cura, Slic3r or KISSlicer.

Adjust your slicer settings and let it slice your file. Save the subsequent sliced file on your SD card or USB flash drive.

Plug it to your 3D printer and hit print. The result will be a nicely printed 3D lithophane model of the photo you chose.

Check out these video to get a step by step explanation of this process.

Another popular software to use is ItsLitho which is a more modern, kept up to date, and has a lot more options.

You can even make colored lithophanes using a special method. Check out the video below by RCLifeOn for more details on how you can do this yourself.

There are many possible issues that you can experience when it comes to the first layers in 3D printing, causing further problems in your models. I decided to write an article going through some...

3D printers like the Ender 3 can have issues with reading the SD card, making it difficult to actually get some 3D prints started. I decided to write an article helping you try and fix this...