You’re having a problem with your extruder motor which happens to be showing signs of movement through vibrations, but its just not turning. This is an issue that many people in the 3D printing community have faced but find it hard to get a straight answer, so I’ve decided to try to do it in this post.

How do I fix an extruder motor that’s vibrating but not turning? The best way to get your extruder motor actually turning again is by identifying whether you have a mis-wired motor, have a current too low, or have a faulty stepper motor altogether. Once you know the cause, the fix is to rewire your motor, get a higher voltage going through or get a replacement extruder stepper motor.

It might sound a little complex to some, so keep reading to find out the simplified version of how to identify and fix an extruder motor that is just vibrating but not turning.

What Causes an Extruder Motor to Vibrate but Not Turn?

Some people describe their extruder motor movement as twitching, juderring, shudder, pulsing and even jitter but basically it’s just moving back and forth very fast.

It’s not an ideal situation to be having but I’ve identified a few causes as to why this has happened to some 3D printer hobbyists out there.

Your extruder motor will vibrate and not turn generally due to one of these reasons:

1. Your extruder motor wires are mis-wired or crimped badly

The most common problem that I’ve seen people have when dealing with this issue is to do with the wiring being incorrectly plugged up.

The first thing you want to do is check the cables and whether your connectors are in good condition or crimped.

You can use a multi meter to check if you have continuity on all of your wires. Once you check the measurements you’ll be able to rule out the wiring being your issue.

It’s possible the color coded wires were put together in the wrong order from the manufacturer, but this reason is unlikely.

2. The current is too low to give enough power for it to turn fully

The next most common problem you are likely to be facing if it’s not the wiring is around your currents and voltage.

In some cases your current is rated lower compared to your other motors so you would have to increase the current.

When a motor vibrates, what it means is it’s not receiving enough power to move past its initial position so the motor is just moving very slowly. Once the connections and currents are in order, your motor should be able to get enough power to start turning fully rather than just vibrating.

This can occur if you have a replacement stepper drive that you just installed, but didn’t do properly.

When you are testing your motor and trying to get it to turn, it does so best when it has filament to actually grip it. This is because the inertia the motor needs to turn has to be similar to its own inertia.

Think of it like the force you need to move a bowling ball. It needs some force to get it rolling, but once it’s moving it moves a lot smoother without the need for as much inertia.

3. You’ve received a faulty extruder motor or it’s past its time

This reason is unlikely because stepper motors are so robust, and are designed to last longer than a 3D printer’s lifespan.

It’s possible that you received a stepper motor that is faulty. To check this you can hook the extruder stepper motor to your X carriage output header connector then home your X axis.

Once you do this check whether the motor does the same thing, and if it does it likely means you have a bad motor connector, your wiring is put in the wrong order or the motor is a fault one.

Before you check the wiring of the stepper motor, if you don’t have any experience you’ll want to follow a reliable video guide that gives you the know-how.

There are a few reasons why it could be faulty such as the internal motor coil being damaged but in this case, you’ll want to contact your seller and get a replacement or a refund.

Motors can have metal shavings inside or a misalignment which will give you issues.

If you follow the first three causes, you’ll most likely have your answer but there are a few other causes to keep in mind:

It’s possible that something could be impeding the extrusion flow of your printer like a cold-end blockage.

If this is the case, you should try to feed the filament through manually with your hand while the hotend is at extrusion temperature. If nothing comes out of the nozzle, you know there is a blockage within.

Sometimes when you try hooking up your motors to your RAMPS board, you can experience the same problem of the motors vibrating but not turning.

If you have looked into the RAMPS board you should check whether it actually has micro stepping jumpers installed on it.

Failed driver on the board. Also if you forget to put jumpers under the drivers it can cause your motors to just vibrate and not turn. Jumpers are small black pieces to put on the pins under the stepper driver. 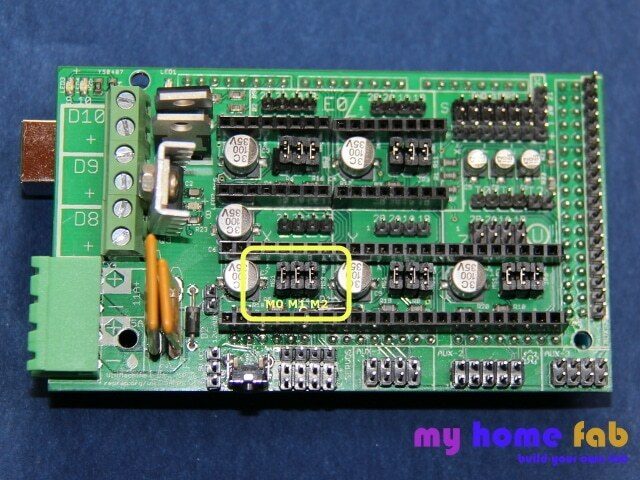 Make sure you avoid putting vibration dampers on your extruder motor because it can cause skips and slipping of the filament.

Sometimes people mistakenly think their extruder motor is vibrating when it is just something on their 3D printer that isn’t sturdy. Make sure you tighten up any loose screws and bolts.

Your spool holder can make vibrations when it’s pulling filament through the extruder, especially when retraction settings are on.

This happened to me so what I’ve done is wrapped a small piece of cloth around the inner spool so it spins around smoothly.

That is just what I personally done, but a better idea would be to print yourself a Filament Guide from Thingiverse.

How To Identify The Cause & Fix

Change the Plugs Around

A good way to identify that your motor isn’t faulty is to operate the same motor on another axis controller. Simply unplug either the X or Y axis and plug it into the E stepper motor then try to move the axis that you plugged E into.

If it was recently bought you should be able to get a replacement from the company.

There might be a safety feature in your firmware that stops the extruder being active while the hot end isn’t hot enough to melt filament. If this is the case, bring the hot end temperature up to around 200°C then plug the E stepper cable back into the cable for E, then try to run a command for your extruder and see if it turns.

A lot of the times people will see their stepper wires connected color-wise but color based guides can be unreliable.

Another common mistake is pairing up the wires to corresponding numbers or letters incorrectly.

Pins are marked with letters and numbers to help find pairs, but you don’t want to rely on this because there could be errors.

Steppers have two coils so what you need to do is find the two wires which make up each coil.

The advised way to find a pair is to short out two wires, then try to turn the motor by hand. If it becomes harder to turn by hand it means the wires are a pair.

Now that we have one complete pair, we know the other two wires are also a pair.

If your motor runs backwards after following the process of connecting up the wires, there is a simple method to fix this.

You want to either plug it in the other way or invert the direction in the firmware configuration.

As long as you put the pairs together correctly it won’t matter what order it goes in.

Make sure that you are getting the correct amount of voltage and current through your extruder motor for it to be able to turn. It’s quite common for this to be the cause and luckily this is fairly simple to correct.

If you don’t have the right amount of amperage output from your designated stepper drivers, the motors will vibrate and not turn. You have to be very careful when doing this because you’re dealing with a lot of power here.

The video below gives a great visual and guide on how to check these things.

You’ll need a volt meter for this. A great one and a best-seller from Amazon is the Elekcity MSR-R500 Digital Multimeter & Voltage Tester. It accurately measures AC/DC voltage for DC current, resistance tests and much more. Safety protection is one of the main highlights, as well as great after-sale support.

Depending on what driver you are using, and what Amp level you have on your motors, you can work out the values.

So if you have a 0.4 amps stepper motor you would do:

Adjust the stepper’s current according to the VREF value, but do this very carefully because settings the current too high can actually melt some parts.

Where Should I Get a Replacement Extruder Motor if I Need One?

This is a highly-rated, high torque solution which is perfect to replace a faulty stepper motor. Twotrees makes sure to package their products well and deliver excellent customer service.

Although I’ve seen many people go for the Aibecy Creality Stepper Motor, you’re clearly a lot better off going with the Twotrees link above for value. It comes with the cable and an extra two stepper motors for your future needs.

link to What Materials & Shapes Cannot Be 3D Printed?

3D printing is an amazing technology that has massive significance in many industries, mainly due to its ability to print strong materials, in unorthodox shapes. Some technologies still can't even...

3D printing uses a variety of materials out of which liquid-based resins and thermoplastic filaments are two of the most common you'll find. Filaments are used with the Fused Deposition Modelling...