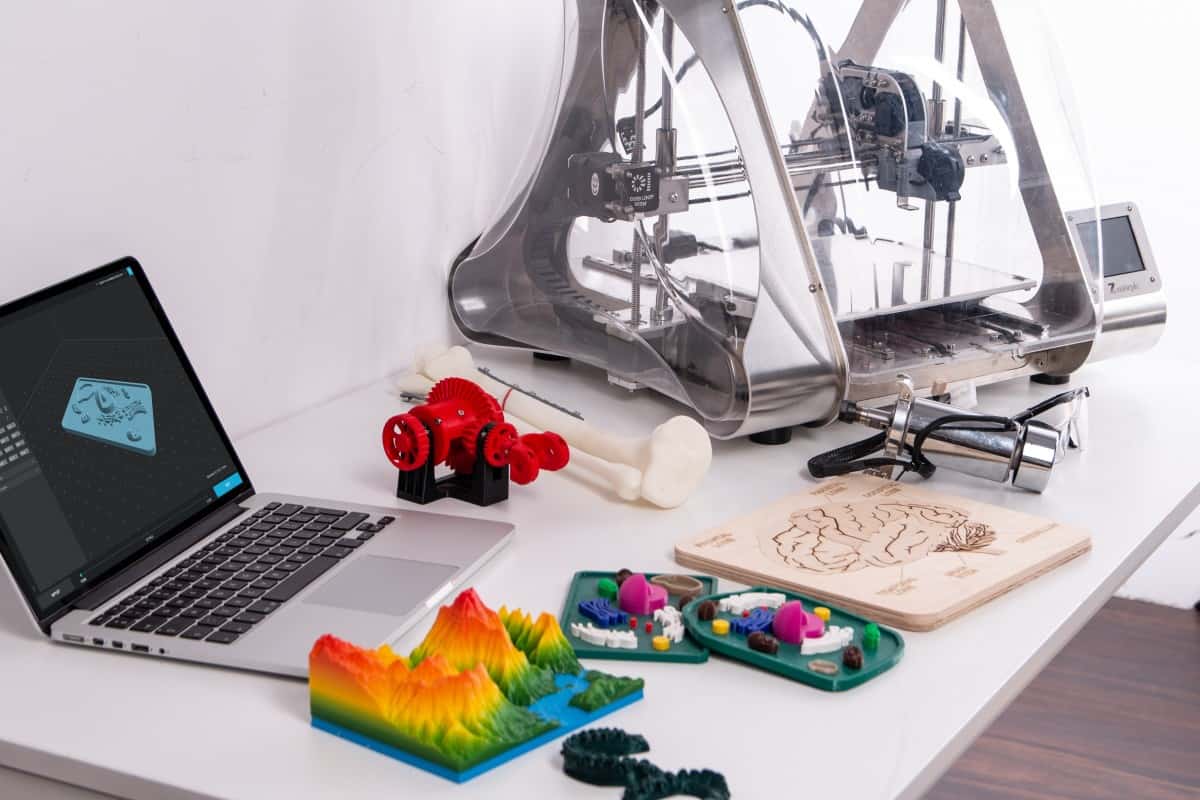 3D printing is a somewhat complex task that may require advanced computer specifications to handle. I wondered just how good of a computer you would need, to know you won’t run into problems when 3D printing, so I decided to make a post about it.

Do You Need a Good Computer for 3D Printing? No, generally you don’t need a particularly good computer for 3D printing. STL files, the common file for models to print, tend to be small files and are recommended to be below 15MB so any computer can handle this. Most models are simple, but high-resolution models can be very large files.

Will an Average Computer Be All I Need for 3D Printing?

For the simple process of operating your 3D printer you won’t need any type of high end specs and an average computer will be just fine.

There are methods for controlling your printers where just a connection to the internet is adequate, with a tablet, computer, or phone.

There is however a difference when we are talking about generating the code from 3D printer files. The software that you need to generate can be highly CPU intensive for models which are complex.

With beginners, the models that they will print are most likely to be quite basic models which should be fine in terms of file size and processing.

With experience comes greater desire to print more complex objects, where the file sizes will be much larger.

With 3D printing you need to be able to generate a code from 3D files which is done through software called a Slicer program. The process to generate these codes can be very CPU intensive with hi-polygon (shapes with many sides) models.

A computer system with 6GB ram, Intel I5 quad core, clock speeds of 3.3GHz and fairly good graphics card such as a GTX 650 should be enough to process these files.

The ideal desktop to go for with the above specs would have to be the Dell Inspiron 3471 Desktop (Amazon). It has an Intel Core i5-9400, 9th Gen processor with processor speeds up to 4.1GHz which very fast! You’re also getting 12GB RAM, 128GB SSD + 1 TB HDD.

I have to add, it looks really cool too! The Dell Inspiron Desktop includes a wired mouse and keyboard, all at a very competitive price.

If you’re the laptop type I’d go for the Fast Dell Latitude E5470 HD Laptop (Amazon). Although it’s Dual-Core, it has an I5-6300U which is a high performance processor with 3.0 GHz speeds.

When you have very hi-poly parts to process, it could take a long time. Some could take a few hours just to process. Slicing 3D files with more complex codes will require high spec computer systems, like 16GB RAM, clock speeds up to 5GHz and a GTX 960 graphics card.

So the real answer here is that it depends on what kind of models you plan to print, whether they be simple designs or complex, hi-poly designs.

If you want a fast computer system that will be able to handle all your 3D printer processing needs, the Skytech Archangel Gaming Computer from Amazon will definitely do the job well. It’s an official ‘Amazon’s Choice’ and is rated 4.6/5.0 at time of writing.

Gaming desktops work really well with processing because they require very similar power to operate at their full potential.

On the laptop side of things for serious power, I’d go with the ASUS ROG Strix G15 Gaming Laptop (Amazon) with an i7-10750H processor, 16 GB RAM & 1TB of SSD for all your computing needs.

It also has an amazing NVIDIA GeForce RTX 2070 8GB GDDR6 graphics card for the best quality picture. I’ve got something very similar and it works great for 3D printing tasks such as modeling, slicing, and other intensive tasks.

Laptops aren’t as powerful as desktops but this one should be able to handle a good amount of processing.

There are many people who simply use an SD card with the 3D print file on it which inserts into the 3D printer.

In this case, a computer isn’t even fully necessary to operate the printer, but you’d need a way to put the file on the SD card. Prints can be lost if your PC fails so having an independent SD card to run your prints can be a good idea.

How File Resolution Comes Into Play on File Size

3D printer users do many things from prototyping to designing something creative. In order to do these things, we use Computer-Aided Design (CAD) software applications. The files within these software can differ greatly.

The most common file format for these designs is Stereolithography (STL). The simple explanation for this format is your designs are translated into triangles within the 3D space.

After you’ve designed your model, you’ll have the option to export the design into an STL file and set your desired resolution.

Resolutions of STL files will have a direct impact on modelling for 3D printing.

Low-Resolution STL Files:
In terms of triangle size, these will bigger and result in the surface of your prints not being smooth. It’s very similar to digital imagery, looking pixelated and low quality.

High-Resolution STL Files:
When files have high resolution, the file can become too large and add difficulties in the printing process. The higher level of detail will consume a lot of time to render and print, and depending on the printer might not be able to print at all.

The recommended file size for 3D printing, when passing files over to 3D printer companies is 15MB.

Most PCs and laptops these days will equipped with the necessary hardware requirements to run a standard 3D printer.

When it comes to 3D modelling, the most important specs is the clock speed (rather than number of cores) and the GPU or graphics card.

The graphics card is what renders the model on your screen in real-time as you are working on it. If you have a low-spec graphics card, you wouldn’t be able to handle hi-poly files in your Slicer application.

Graphics cards that use shared system memory aren’t the best, which is common in laptops. You ideally want graphics cards which have dedicated memory just for the GPU if you have high resolution files, otherwise this shouldn’t matter much.

Gaming laptops will usually have good enough specs to process models at a good speed.

CPU: AMD or Intel with quad-core processor and at least 2.2 GHz

A good fix for this could be to set your laptop to not go into power-saving mode or sleep mode and just run all the way through.

Computers tend to pack more power and higher specs so it’s ideal to use a decent computer rather than a laptop. Computers will send a smoother stream of information and you’ll be able to use it while processing your 3D prints.

With a laptop, using it at the same time as your 3D printer may cause issues.

The best solution to not have issues between your computer/laptop and your 3D printer is to make use of an SD card which inserts directly into your printer with the 3D print file you want to use.

Is it Worth Getting an Expensive Computer for 3D Printing? If you are a beginner, it’s not necessary but if you have more experience and want to go further into the 3D printing process like designing your own models, it could be worth doing. You would only want an expensive computer for high-resolution designing and rendering.

Can I 3D Print Without a Computer? It is entirely possible to 3D print without a computer on hand. Many 3D printers have their own control panel where you can simply insert an SD card with the 3D print file and begin the process directly. There are also methods to control your 3D prints through a browser or application.

So to summarize, you can’t go wrong with the Skytech Archangel Gaming Computer from Amazon. It has amazing specs, serious speed, and really good graphics. The good thing about a desktop versus a laptop is you can upgrade it in the future.

Get yourself the Skytech Archangel Gaming Computer from Amazon today!