The first layer is the most important layer in 3D printing, so I decided to put together some of the best first layer calibration tests that you can do to improve your first layer.

There are different kinds of tests that you can do, so stick around to see which files are popular in the 3D printing community and how to use them effectively. 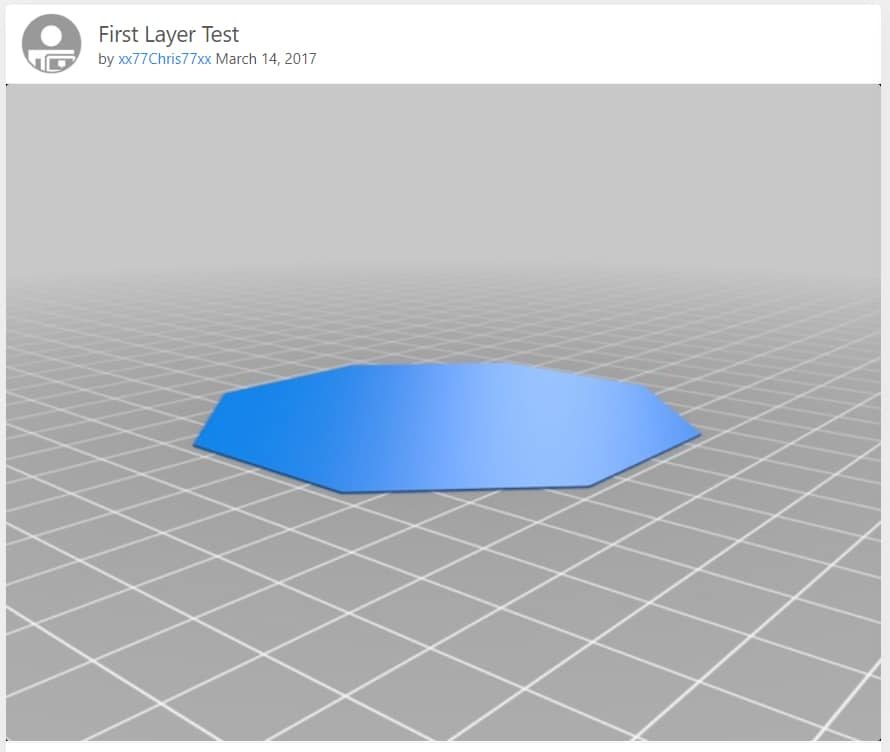 The first test is a basic first layer test that you can use to check whether your bed is level across the surface. You can place multiple of these shapes around the bed for the best results.

The design is a simple octagon model. With over 20,000+ downloads, the simplicity of the design makes it a go-to choice to observe the overall outlook of your 3D model.

One user mentioned that this model helped him level his Prusa I3 MK3S machine with orange PETG filament.

Another user who 3D printed this model on his Anet A8 machine said it came out with a smooth glass top finish, using a layer height of 0.2mm.

Check out the First Layer Test by xx77Chris77xx on Thingiverse. 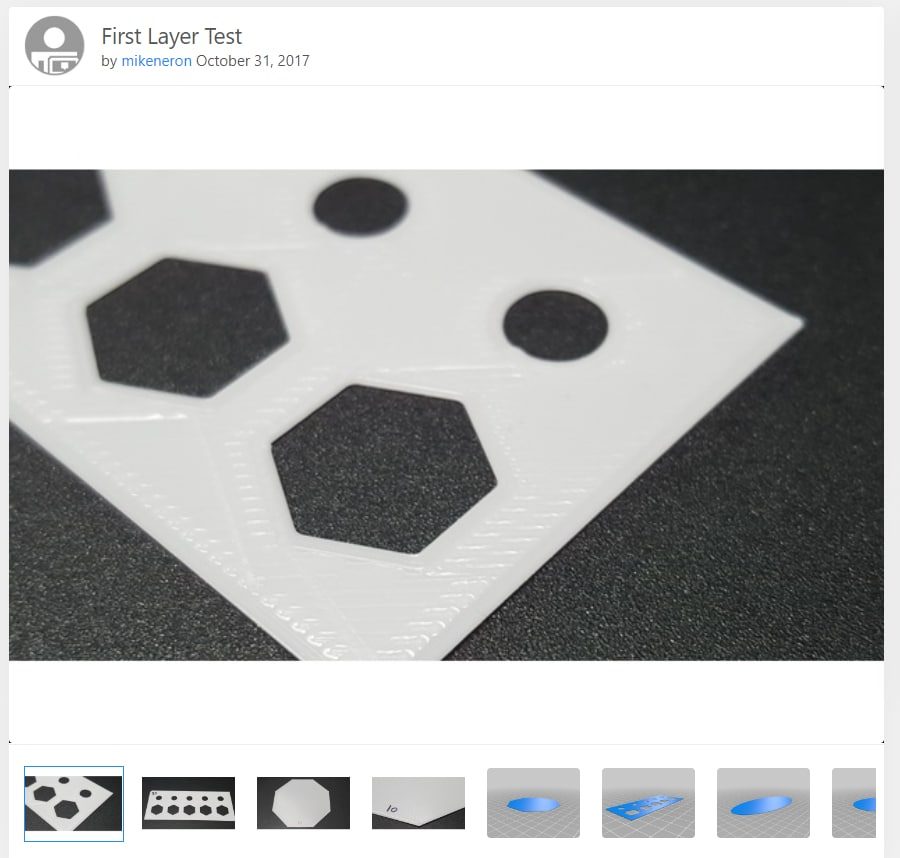 This test print model consists of a collection of various shapes that you can choose from for calibrating your 3D printer’s first layer.

The most important layer for each 3D print is that first layer, so making sure that it is done properly is important. I’d recommend starting out with some simple models, then move onto more advanced shapes in the collection for better results.

The model is 0.2mm high so using a 0.2mm layer height will create one layer.

One user who 3D printed this models said he initially had issues with his matte PLA filament sticking to the bed. After doing some of the complex designs and doing some leveling, he got some great first layers on his models.

He said that he would continue to use this test model whenever he changes filaments to ensure great first layers.

Check out the First Layer Test by Mikeneron on Thingiverse.

3. On the Fly Bed Level Test by Jaykoehler 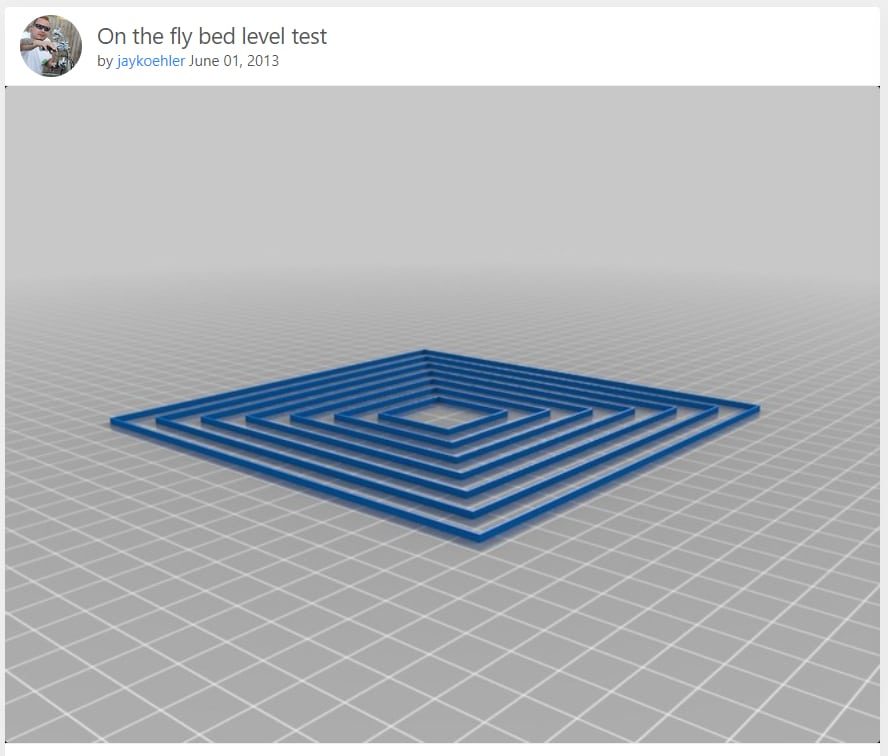 The On the Fly Bed Level test is a unique one that consists of many concentric squares. When you 3D print this model, you’ll be able to easily adjust the bed level during extrusion to get that first layer perfect.

You don’t have to 3D print the whole model. As long as the first layer looks good and adheres to the bed nicely, then you can stop the test print and start your main one.

One user made a comment stating that it helped calibrate their bed and now he only has to worry about calibrating the speed and temperature.

Another user said he was planning on making his own test print but was delighted to see this model for testing his first layer accuracy.

It can easily show you what side of your bed is too high or low, and one user said it helped him determine which one of his Z-axis couplings wasn’t tight enough.

Check out the video below by CHEP to see a similar design in action.

Check out the On the Fly Bed Level Test on Thingiverse. 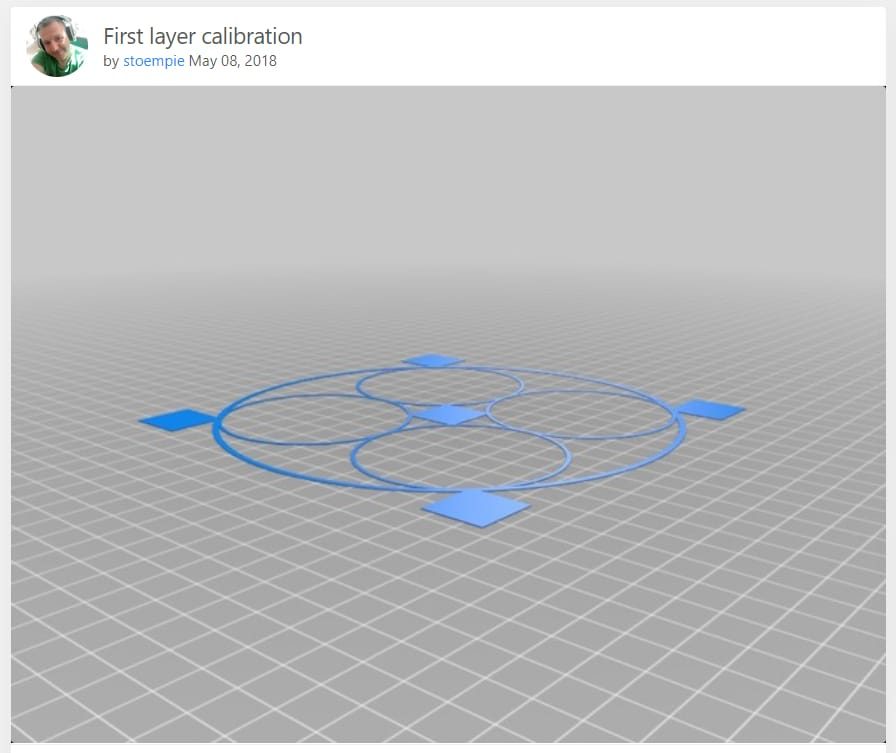 The first layer calibration test by stoempie helps to test for the accuracy of curved prints and ensure the areas where they meet are good.

This first layer test consists of sets of circles and squares touching each other at various points. It’s a much more complex print that can expose hidden flaws that other test prints might not showcase.

One user commented that he used it to perfect the bed level on his Ender 3 Pro successfully.

Check out this First Layer Calibration on Thingiverse.

5. Square and Circle by CBruner 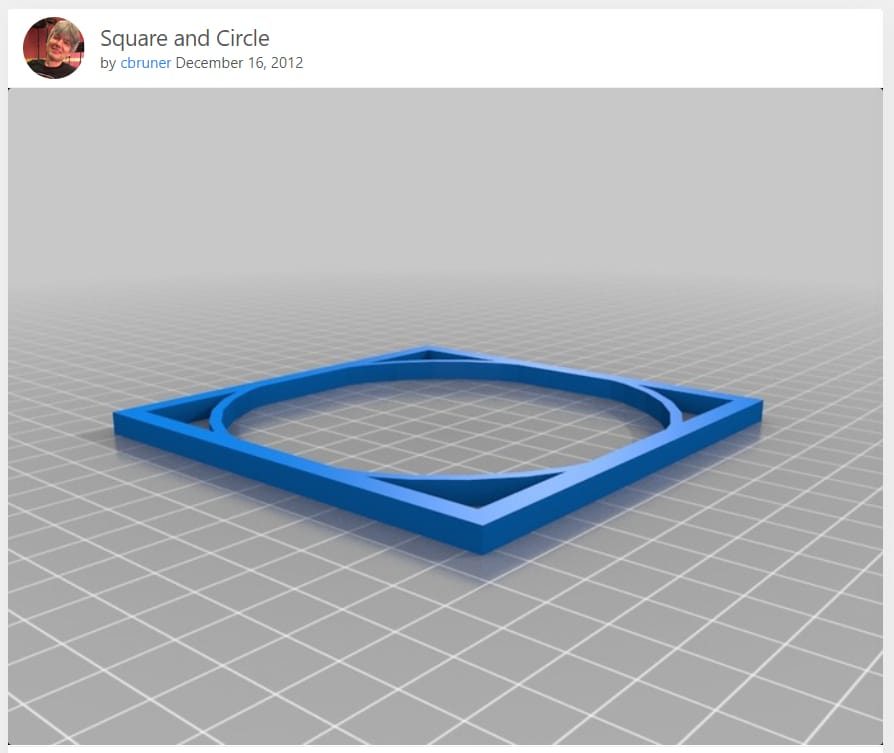 The square and circle test print is literally a square with a circle in it. The circle will easily show any issues more clearly than the square if the first layer has any form of issues.

One user said the test print is great for testing X and Y belt tension as well as current to the motors in comparison with each other.

Another person said that the test print was helpful in tweaking the bed level of his Ender 3, sliced on Cura. He also stated that he was able to see and correct the bed level height on two corners as it was printing.

He then went on to say that as a result, his other prints are going strong.

Check out this simple Square and Circle test on Thingiverse. There’s also a remix with a shorter version so you don’t use much filament. 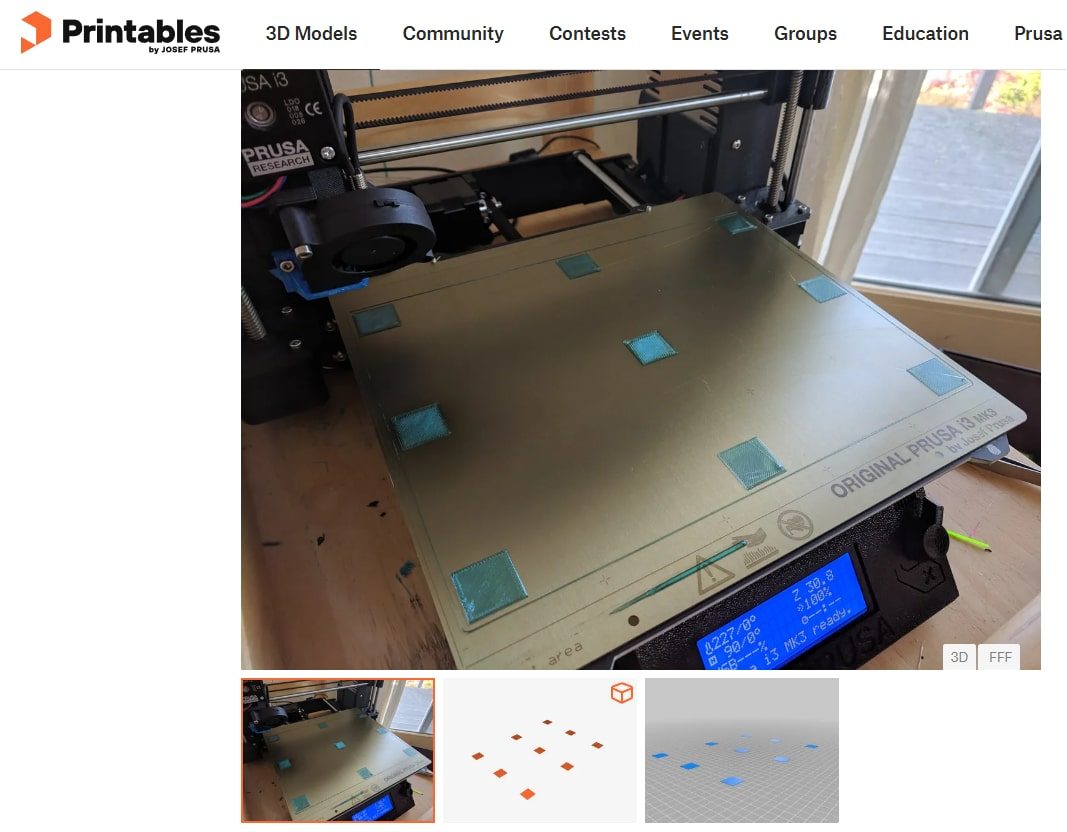 This first layer test design is a remake of the original Prusa MK3 design. Some people stated that they still had issues after calibrating their beds with the original test design.

The Prusa MK3 Bed level design by punkgeek is a much bigger design that spans across the important areas of the entire bed. The original design which was very small could not test the accuracy of the entire bed.

With this test print, you have lots of time for each print to perform your “live Z adjustment”. Simply turn the bed leveling knobs while printing to see each square get better (or worse).

During this test, you should observe how each line laid out around the bed, adheres to the corners.

If you observe that the line is pushing up, you would have to decrease “live Z further” or simply calibrate the bed level of that side.

He stated that the front right corner of his bed was higher than the other areas and he was struggling to find that sweet spot where the height across the bed was acceptable. He then did this test print and it did the trick for him.

Check out the video below to see a similar bed leveling test in action.

Check out the Prusa Mk3 Bed Level Test on Printables. 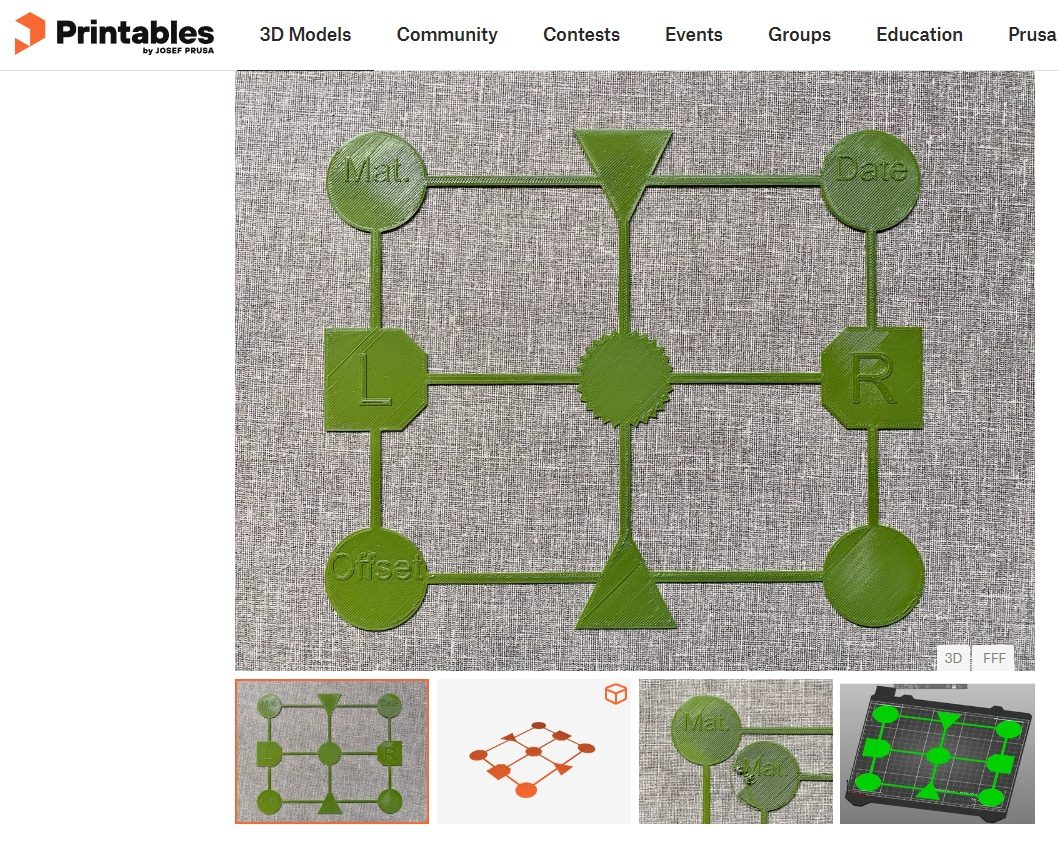 The combined first layer and adhesion test design by R3D helps to test for Nozzle offset, bed adhesion, roundness, and small feature performance. The combination of shapes in this design helps to test all of the above features.

This test print has some indicators that can easily help detect certain issues. They include the following:

Another user who 3D printed this first layer adhesion test on his MK3s with a PINDA probe found it useful for calibrating his bed level.

It helped him fine-tune the bed level for larger 3D prints, especially in the corners. He did have to do a few attempts to get things right but got there with some adjustments and a 0.3mm layer height.

Here’s a video that shows how the layer of your first print should look, regardless of your test print.

Check out the Combined First Layer + Adhesion Test on Printables.