3D printing has many uses, but one use that people wonder about is whether PLA, ABS or PETG would melt in a car with the sun blazing down. Temperatures within a car can get pretty hot, so the filament needs a high enough heat-resistance to handle it.

I decided to write this article to try and make the answer a little clearer for the 3D printer hobbyists out there, so we can get a better idea of whether having 3D prints in a car is feasible.

Will 3D Printed PLA Melt in a Car?

The melting point for 3D printed PLA ranges from 160-180°C. The heat resistance of PLA is fairly low, virtually lower than any other printing material used for 3D printing.

Typically, the glass transition temperature of PLA filament ranges from 60-65°C, which is defined as being the temperature at which a material goes from rigid, to a softer but not melted state, measured in stiffness.

Many places around the world won’t reach those temperatures in a car unless the part is standing under the direct sunlight, or you live in a region with a hot climate.

3D printed PLA will melt in a car when temperatures reach around 60-65°C since that is the glass transition temperature, or the temperature that it softens. Locations with hot climates and a lot of sun are likely to have PLA melt in the car in the summer time. Places with cooler climates should be okay.

The degree to which the sun will affect your filament varies, but if any part of your PLA model is exposed to the sun or indirectly to heat, it can start to soften and warp.

One 3D printer users shared his experience, stating that he printed sun visor hinge pins using PLA filament and the print was apparently not directly exposed to the sun as well.

In just one day, the 3D printed PLA pins were melted and completely deformed.

He mentioned that this happened in a climate where the outdoor temperature was not more than 29°C.

If you have a black car with a black interior, you can expect much higher temperatures than normal due to the heat absorption.

Will 3D Printed ABS Melt in a Car?

The printing temperature (ABS is amorphous, so technically has no melting point) for 3D printed ABS filament ranges from 220-230°C.

The more important property to look for using parts in a car is the glass transition temperature.

ABS filament has a glass transition temperature of around 105°C, which is pretty high and even close to the boiling point of water.

ABS can definitely withstand a high level of heat, especially in that of a car, so 3D printed ABS wouldn’t melt in a car.

3D printed ABS won’t melt in a car since it has great levels of heat-resistance, that of which won’t be reached in a car even in hot conditions. Some extremely hot locations can reach those temperatures though, so you would be better using a lighter color filament.

Another factor that you should look out for though is the UV radiation from the sun. ABS doesn’t have the greatest UV-resistance so if it gets direct sunlight for long periods of time, you might find discoloration and a more brittle 3D print.

For the most part, it shouldn’t have such a large negative effect and should still hold up really well for use in a car.

One user who chose ABS for a project that he printed a model for his car, and the ABS model lasted a year long.

After a year, the model broke into two parts. He inspected the two parts and noticed that there were only a few millimeters that got affected by the temperature and broke mainly in that one location.

On top of this, printing with ABS can be difficult, especially for beginners because you need to fine-tune your process. An enclosure and a strong heated bed is a good start for printing ABS.

If you can print efficiently with ABS, it could be a great choice for your car because of its UV-resistant properties and 105°C glass transition temperature.

ASA is another filament similar to ABS, but it has specific UV-resistant properties that protect it against direct sunlight damage.

If you are going to use filament outside or in your car where heat and UV can affect it, ASA is a great choice, coming in at a similar price to ABS.

Will 3D Printed PETG Melt in a Car?

If you need a model that will be placed in the car, PETG should last longer, but it really doesn’t mean that it won’t melt in the car. PETG 3D printer filaments have a melting point of about 260°C.

The glass transition temperature of PETG ranges from 80-95°C which makes it more efficient in facing the hot climate and extreme temperature as compared to other filaments.

This is mainly due to its high strength and heat-resistant properties, but not as high as ABS & ASA.

In the long run, PETG can offer better results in the direct sun as it has the ability to withstand UV radiation much better as compared to other filaments such as PLA and ABS.

PETG can be used for various applications and can be kept in the car as well.

If you live in an area where outdoor temperatures can get to 40°C (104°F) then it may not be possible for PETG models to stay in the car for a very long time without getting significantly softer or showing signs of warping.

If you are new to 3D printing and you don’t want to try printing ABS, PETG can be a great choice as it can stay in the car for a long time and is easy to print as well.

There are some mixed recommendations in terms of this, but you should try to use a filament that has a fairly high glass transition temperature, ideally near the 90- 95°C point.

One person in Louisiana, a really hot location, did a car interior temperature test and found that his BMW dashboard peaked at around that mark.

What is the Best Filament to Use in a Car?

The best filament to use in a car that has great heat-resistant and UV-resistant properties is Polycarbonate (PC) filament. It can hold up in very high heats, having a glass transition temperature of 115°C. Cars can get up to temperatures around 95°C in a hot climate.

If you are looking for a great spool to go with, I’d recommend going for the Polymaker Polylite PC1.75mm 1KG Filament from Amazon. Along with its amazing heat-resistance, it also has good light diffusion, and is stiff and strong.

Regardless of what season you’re in or whether the sun is blazing down, you can be sure that PC filament will hold up very well in the heat.

It has amazing outdoor applications as well as much use in industries which require that high level of heat-resistance.

You’re going to be paying a little more than normal to get the amazing qualities, but it is very worthwhile when you have specific projects like this. It is also really durable and known as one of the strongest 3D printed filaments out there.

Prices of Polycarbonate have really reduced in recent times, so you can get a full 1KG roll of it for around $30.

Annealing your 3D prints results in the shrinkage of the material and makes it more resistant to warping.

To make PLA filament more heat-resistant, you need to heat your filament above its glass transition temperature (about 60°C) and less than its melting point (170°C) and then leave for some time to cool down.

Simple steps to get this job done is as follows:

Josef Prusa has a great video showing and explaining how annealing works with 3D prints that you can check out below.

PLA provides amazing results when you anneal it compared to other filaments like ABS & PETG.

3D printer users often ask if this also works for ABS and PETG filaments as well, experts claim that it shouldn’t be possible because these two filaments have highly complex molecular structures, but testing does show improvements. 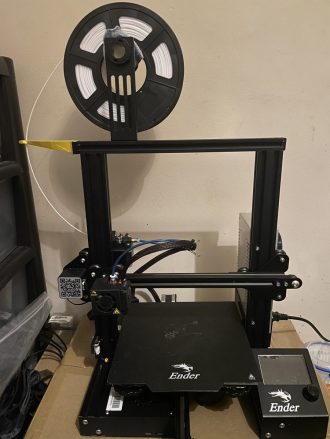 I went through a long period of great 3D printing with no issues, but then I started to experience my Z-axis starting to slip down and slowly fall while it was raised up. I couldn’t figure out why it was dropping like this, so I went to try and figure this out. To fix your…

When you are in the field of 3D printing, there are steps you have to follow to be able to actually 3D print your objects. Many steps are done for you but making 3D printer files is one of the most important ones. This article will show you exactly how 3D printer files are made…

Many people wonder how they should turn off their 3D printers. I decided to write an article that answers this question so people can learn the proper method to turn their 3D printers off, along with some unique methods to turn it off remotely. Keep on reading to find out more. What Should You Do…

The Creality CR-10 Smart is a machine created to give users a more intelligent experience and performance that really translates to a modern feel. Creality are no newcomers to creating popular and well-loved machines, which is definitely seen in this 3D printer. There are plenty of features that you’ll be able to enjoy with the…

When it comes to resin 3D printing, there are a few types of resins you want to get familiar with. I thought there was only one type when I first started. After some time, I noticed there are more types with some cool properties. For resin 3D printing, you can choose to use Standard Resin,…

Many people who get into 3D printing start to wonder whether you can 3D print gold, silver, diamonds, and jewelry with it. This is a question that I decided to answer in this article so people have a better idea. There’s some useful information that you’ll want to know about 3D printing with these materials…