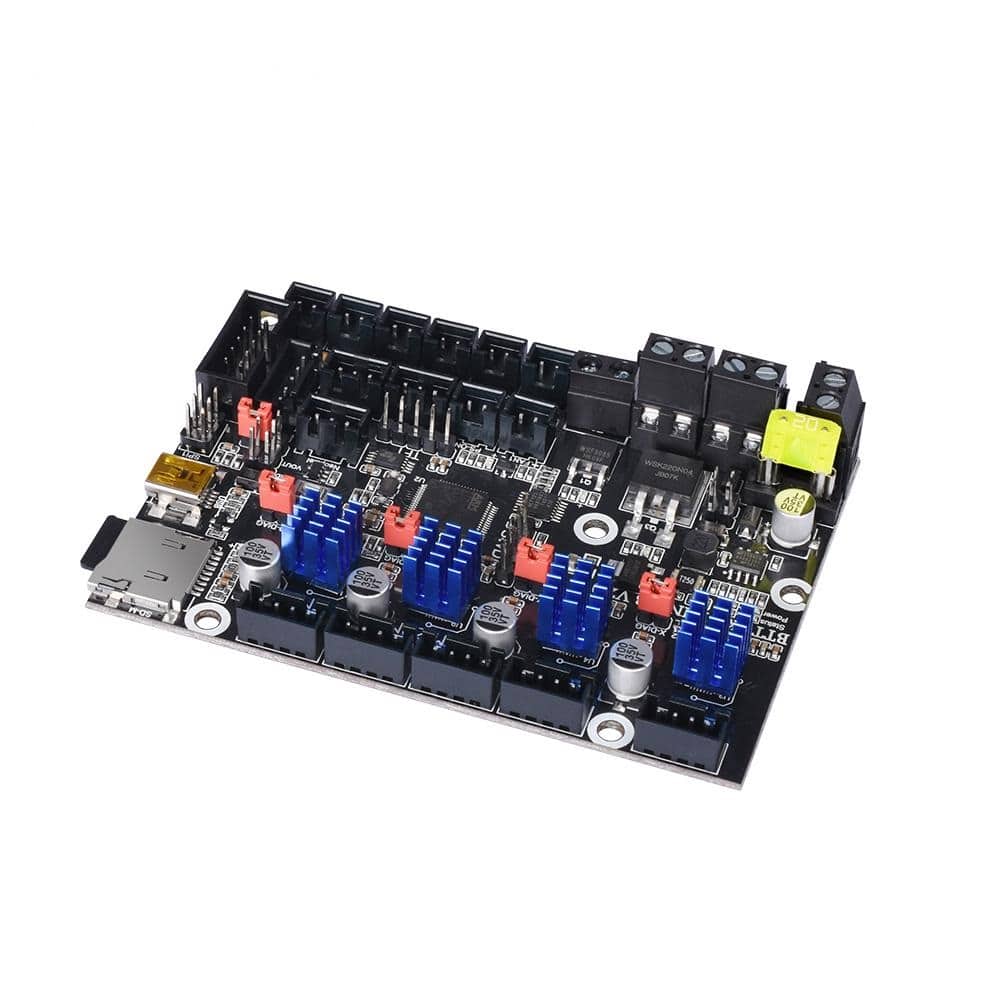 As you may have heard, the all-new SKR Mini E3 V2.0 (Amazon) has been released, giving a whole new option to everyone to upgrade their control board. I’m going to do my best to detail the changes that this new board have over the previous V1.2 board.

The V2.0 board is described as a motherboard specifically tailored for Ender 3 and Creality 3D printers, to perfectly replace the original motherboards on these machines.

It’s made by the 3D printing team over at BIGTREE Technology Co. LTD. in Shenzhen. They are a team of 70+ employees and have been operating since 2015. They focus on making high quality electronics that benefit the operation of 3D printers, so let’s look at the new release of the V2.0!

If you want to quickly purchase the SKR Mini E3 V2.0 at the best price, you should get it from BangGood, but delivery does usually take a little longer.

Some of this is pretty technical so don’t worry if you don’t understand it. The sections below will put these in simple terms for understanding what it’s actually bringing you.

Some people have only recently bought the V1.2 and suddenly see the SKR Mini E3 V2.0 (Get from BangGood cheaper) has been brought out onto the market. This may be frustrating, but let’s see what the actual effective differences are between these two boards.

Dedicated EEPROM which gives stability in the data of your 3D printer. It’s used to store custom settings, rather than for Marlin. For example, adjustments such as Preheat PLA/ABS settings can be customized to your liking and saved for next time.

You might not want all this data to be saved in the memory space which is used for the firmware. It can cause issues where you would have to change the address of the EEPROM memory, in cases where your Marlin install contained more than 256K.

Another issue arises if you use Print Counter, where it won’t save your custom settings after being shut down. So having this dedicated EEPROM just for settings is a useful upgrade and makes your data more stable.

When the V1.0 control board was updated to the V1.2, there was actually a step backwards that was taken to make things a little less efficient.

This resulted in having to use 3 more pins and not be able to use a hardware UART for the drivers. The reason the V1.2 doesn’t have an RGB port is exactly because of that, so it instead uses a neopixel port using just one pin.

The board already has a low amount of pins so it doesn’t work out too well in options.

The SKR Mini E3 V2.0 now has moved the UARTS back to the 2209 mode, so we have more access and connections to use.

There is a double Z port but it doesn’t really make too much difference since it is, practically speaking, a built-in 10C parallel adapter.

Although it describes the extra layers prolonging the life of the board, it might not necessarily positively impact the lifetime of the board, as long as it’s used correctly. This is more of a protective measure against people who make mistakes with shorting their board.

I have heard a few stories of V1.2 boards failing, so this is a useful upgrade in many regards. It improves heat dissipation signal function and anti-interference.

So technically it might not prolong board in some cases, if you are not following the process carefully.

Instead of having to solder a jumper wire from the DIAG pin on the driver to the endstop plug on the other side of the V1.2 board, with the V2.0 you just need to install a jumper cap. You might want sensorless homing without having to jump through these soldering hoops, so a V2.0 upgrade would make a lot of sense.

There’s nothing worse than getting a whole new board and making an error which renders it useless. The V2.0 has put in a bunch of protective design features to ensure that your board stays safe and durable for the long run.

You have thermistor protection, larger heat dissipation areas, increased space between drive chips as well as space between important elements of the board to protect from heat malfunctions.

We also have an optimized frame where the screw hole and screws go, making sure they don’t collide with other parts. I’ve heard some issues where screwing in the board too tight has resulted in some parts being damaged, so this is an ideal fix.

Efficient Reading of the G-Code

It has the ability to look at G-Code ahead of time so it makes better decisions when calculating acceleration and jerk settings around corners and curves. With more power and the 32-bit board, comes a faster command-reading ability so you should get better looking prints overall.

Setting Up the Firmware

The board should already have the firmware installed on it from the factory testing, but it can be upgraded using Github. The firmware between the V1.2 and V2.0 is different and it can be found on Github.

It has clear instructions on how to update the firmware, which you’ll want to do since the original factory firmware has limitations such as not supporting BLTouch.

Some people are intimidated by setting up the firmware but it’s fairly simple. You just have to install Microsoft Visual STudio Code, then install the platform.io plug in, made specifically for it.

Chris Riley from Chris’ Basement has a neat video which goes through these steps that you can follow along with. It’s more so for the V1.2 board since he has not yet done the V2.0 board but it has enough similarities that it should work fine.

Verdict: Is It Worth the Upgrade?

With all the specifications, features and benefits listed about, should you get the SKR Mini E3 V2.0 or not?

I would say, there have been many updates in the SKR Mini E3 V2.0 which 3D printer users will enjoy, but there also isn’t necessarily many reasons to upgrade from a V1.2 if you already own one.

There is a little bit of a price difference between the two of around $7-$10 or so.

I would describe it as a great incremental upgrade, but nothing to get too excited about in terms of massive changes. If you enjoy your 3D printing life being easier, the V2.0 would be an ideal choice for you to add to your arsenal.

There is also a Creality Silent Board that people choose, but with this release, there is a lot more reason to go with the SKR option.

Many people still have the original 8-bit board, so if that’s the case this upgrade would be a pretty significant change for your 3D printer. You’re getting plenty of new features while also preparing your 3D printer for the future and what ever changes may come about.

As we all know, 3D printers place great importance on getting the right temperature conditions in order to create a high-quality 3D print. One of the best ways to achieve that constant temperature is...

Continue Reading
link to Can I Sell 3D Prints From Thingiverse? Legal Stuff

In the 3D printing field, there are massive archives of designs which people upload, can also download for free themselves, and use them to 3D print. Another element comes into play when you print...