Leveling your resin printer is one of the most important things to do for getting successful prints. This is something I figured out early, so I decided to write an article on how to level different resin printers.

This is a fairly simple process, but there is more information that you may find useful, so keep reading through this article to get tips on leveling your resin printer easily. There is also another leveling method, loved by many further in this article that you may want to try.

Leveling your resin 3D printer is a fairly simple and easy process but very essential to the success of your models. One of the main reasons why resin 3D prints fail is because the build plate isn’t level.

Generally, there is a similar process for every resin 3D printer, but there are slight differences from one printer to another. I put together the process for the Anycubic Photon Mono X and the Elegoo Mars 2 Pro below.

The first step to leveling your Anycubic Photon Mono X or similar 3D printer is to prep the build plate. 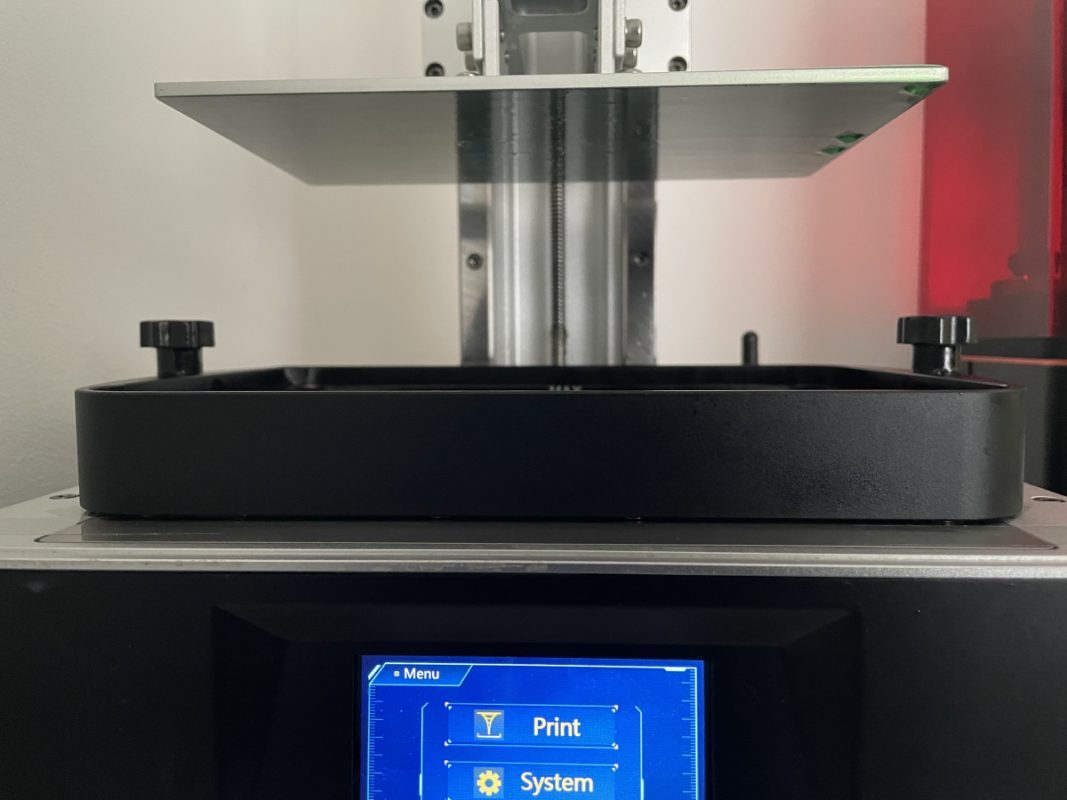 This is done by cleaning the bottom, sides and top of the build plate with a paper towel. You don’t want any resin dripping or getting on the screen. Make sure you wipe the bottom three or four times quite firmly since the resin can get between the scratches. 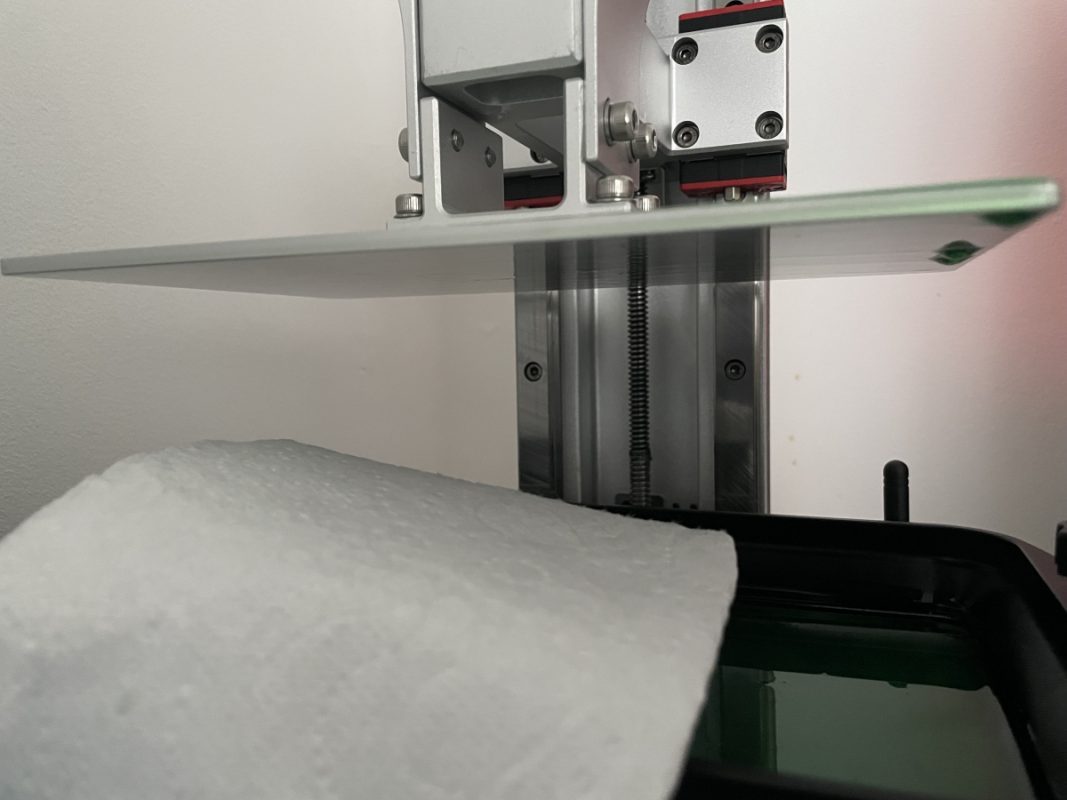 Once you’ve cleaned the build plate, we can carefully remove the resin vat and place it somewhere clean, that isn’t dusty. The vat should have small feet to elevate it but we still want to put it on a fairly clean surface just in case.

I make sure to put the paper towels with uncured resin under a UV light so it is safe to dispose of. 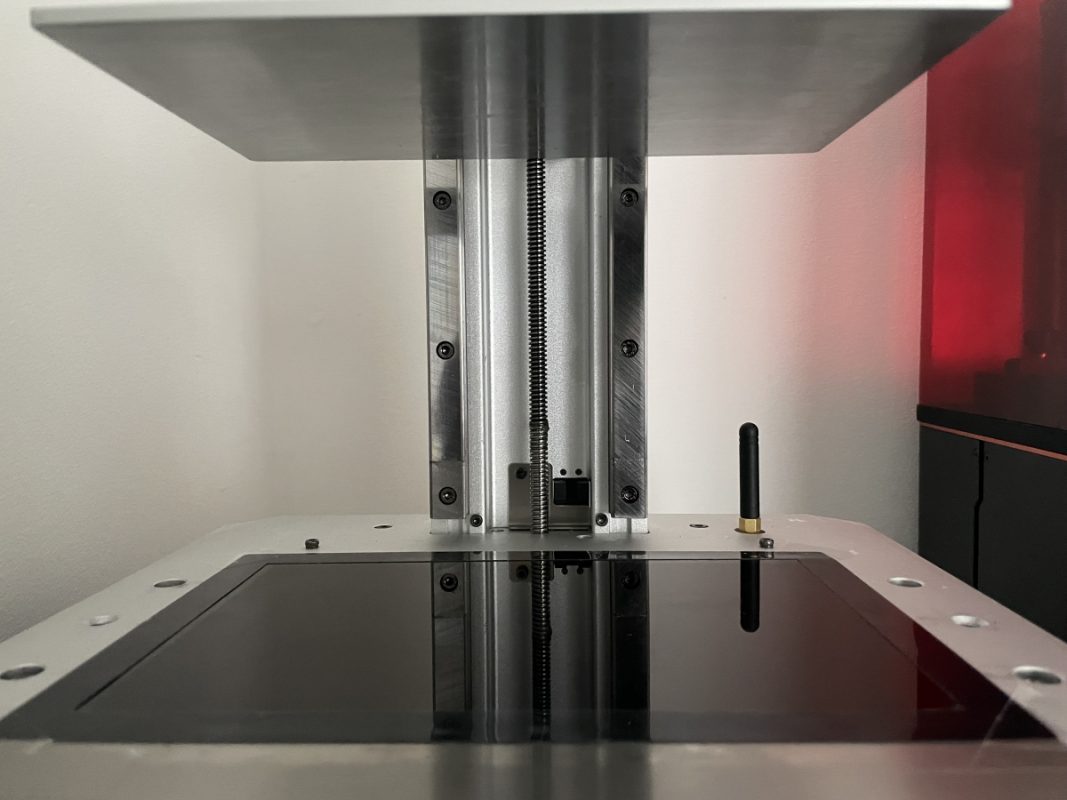 Now that we have cleaned the build plate and removed the resin vat, we want to loosen the four build screws (with a 4mm Allen Key) on the top side of the build plate (not the lower four screws). You just need it to be slightly loose, not screwed out very far. 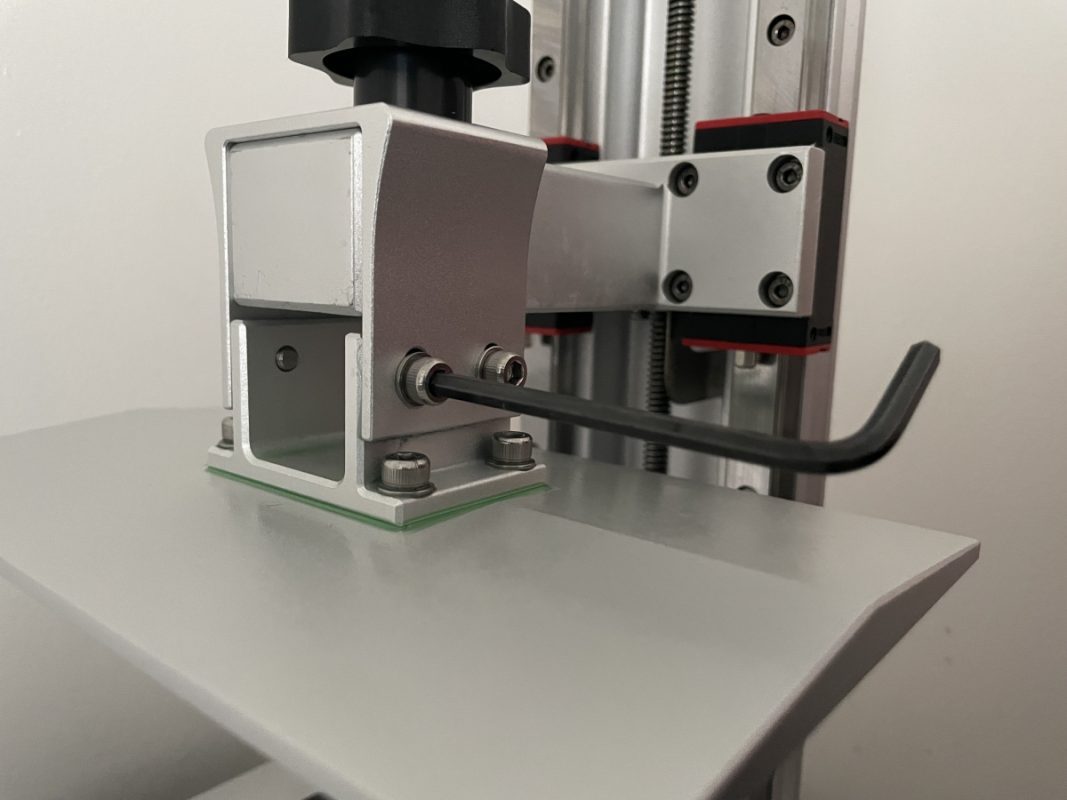 Get your A4 piece of paper, known as the leveling paper and place it on your screen. This provides a small gap to act as a similar thickness as the FEP film, as well as to stop the screen getting resin on it. Now we go into “Tools” and press the “Home” button to lower the build plate. 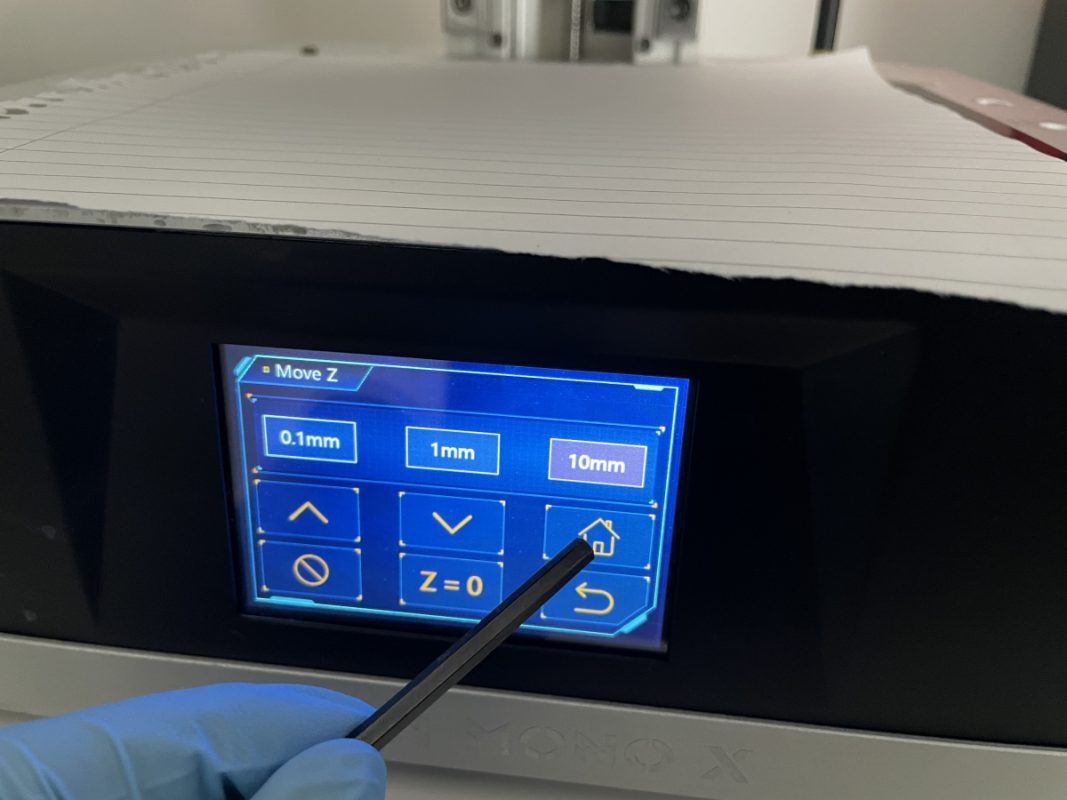 You want to try and spread your fingers fairly wide (much wider than the picture if you can) to push down the build plate evenly on the screen. It’s a bigger 3D printer than most so you’ll have to try and push the middle and corners down while you tighten the four screws.

Make sure to tighten the screws quite firmly so it stays in place properly. 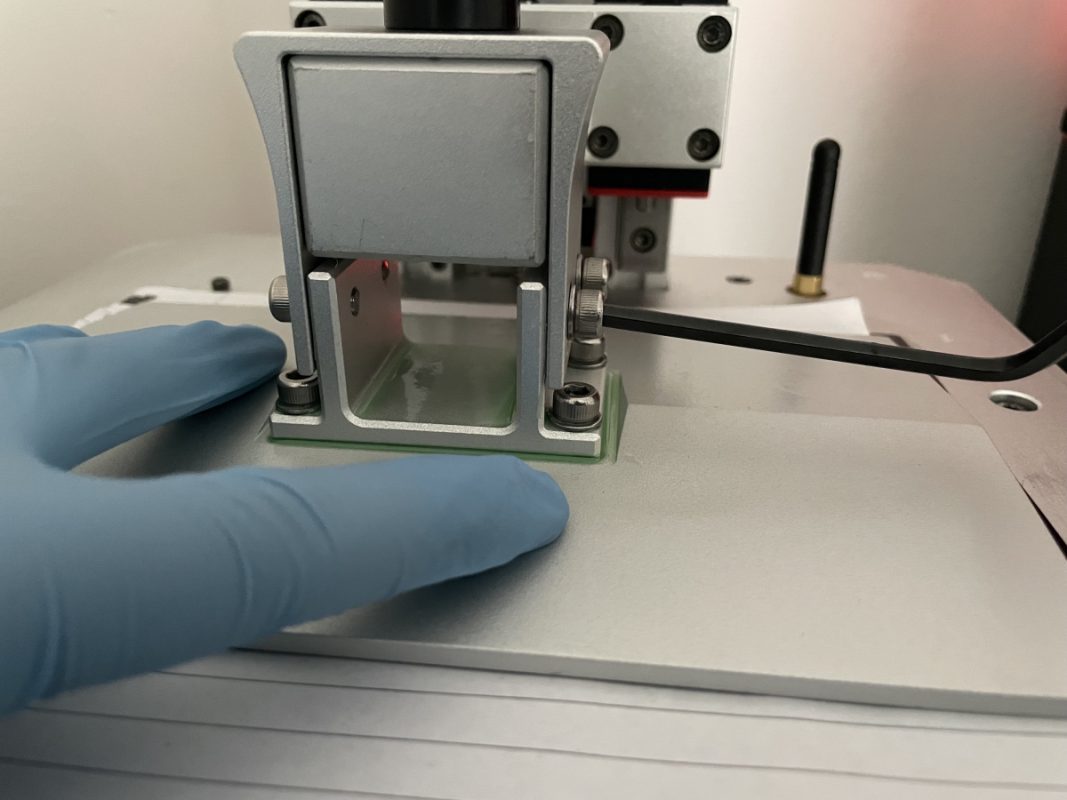 You then want to raise the build plate by 0.1mm until the paper can be wiggled around a little bit but isn’t too loose.

Once that’s set in place, we can press “Z=0” to set the current build plate position to be the home point. 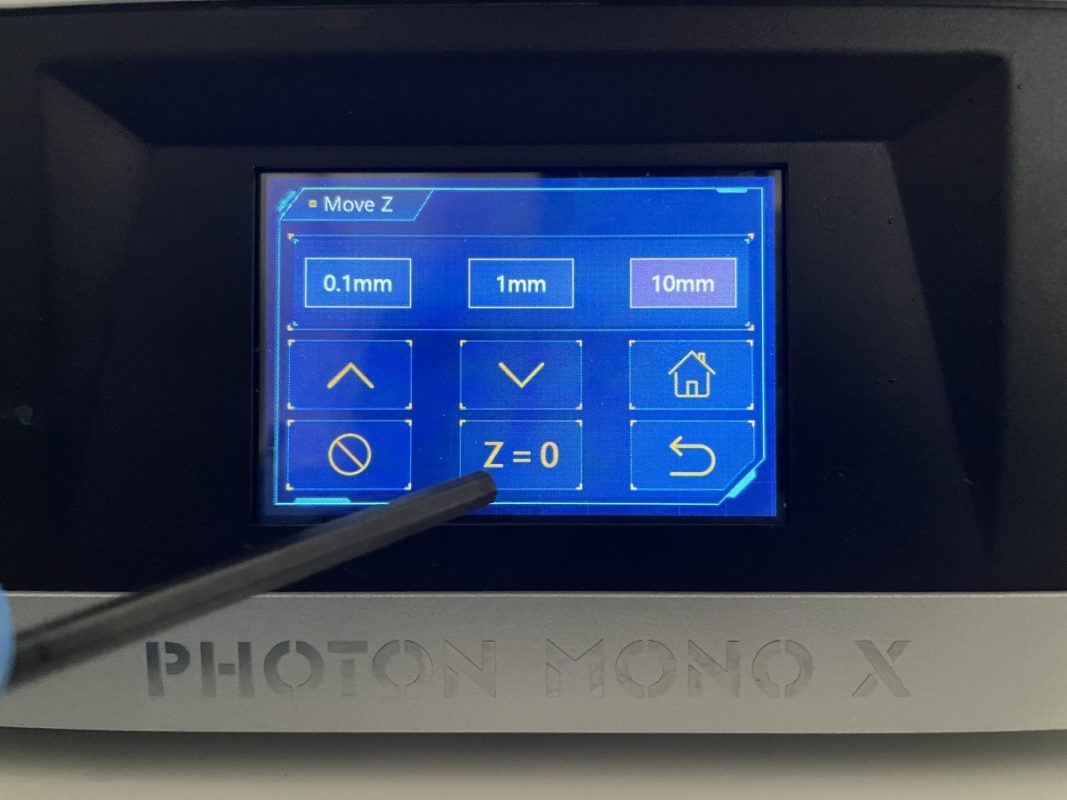 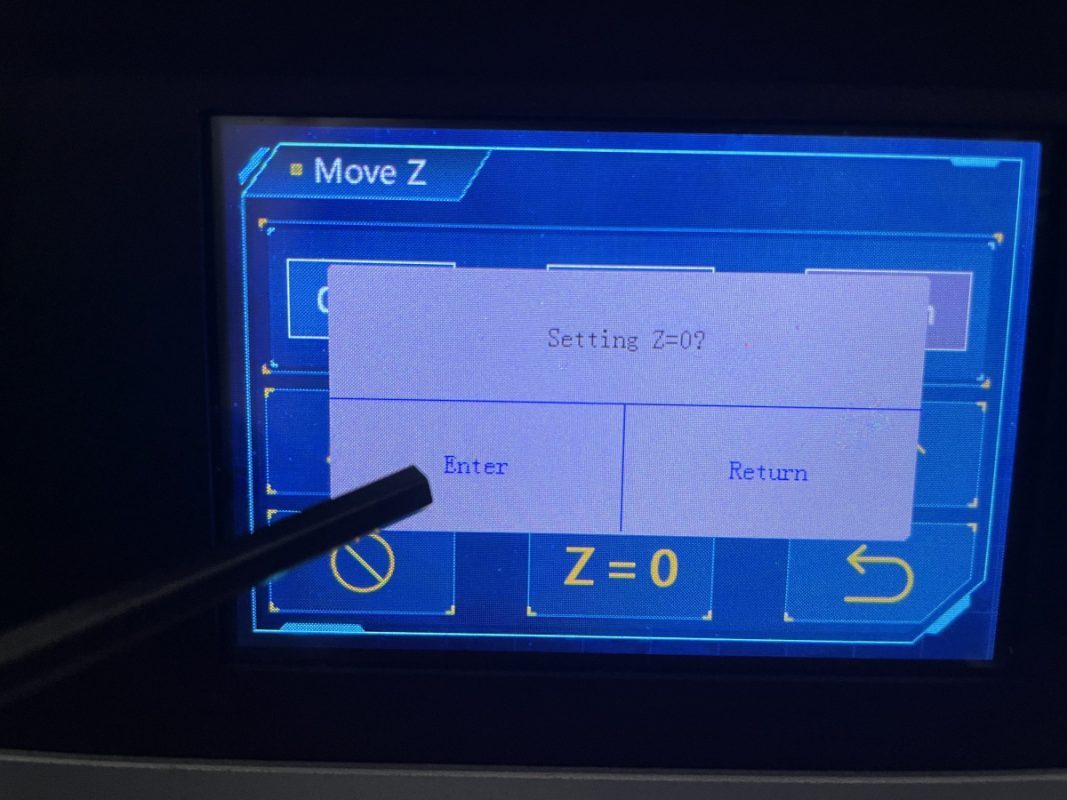 This should now save the new home position. It will ask you to raise up the build platform by pressing “Enter” again. 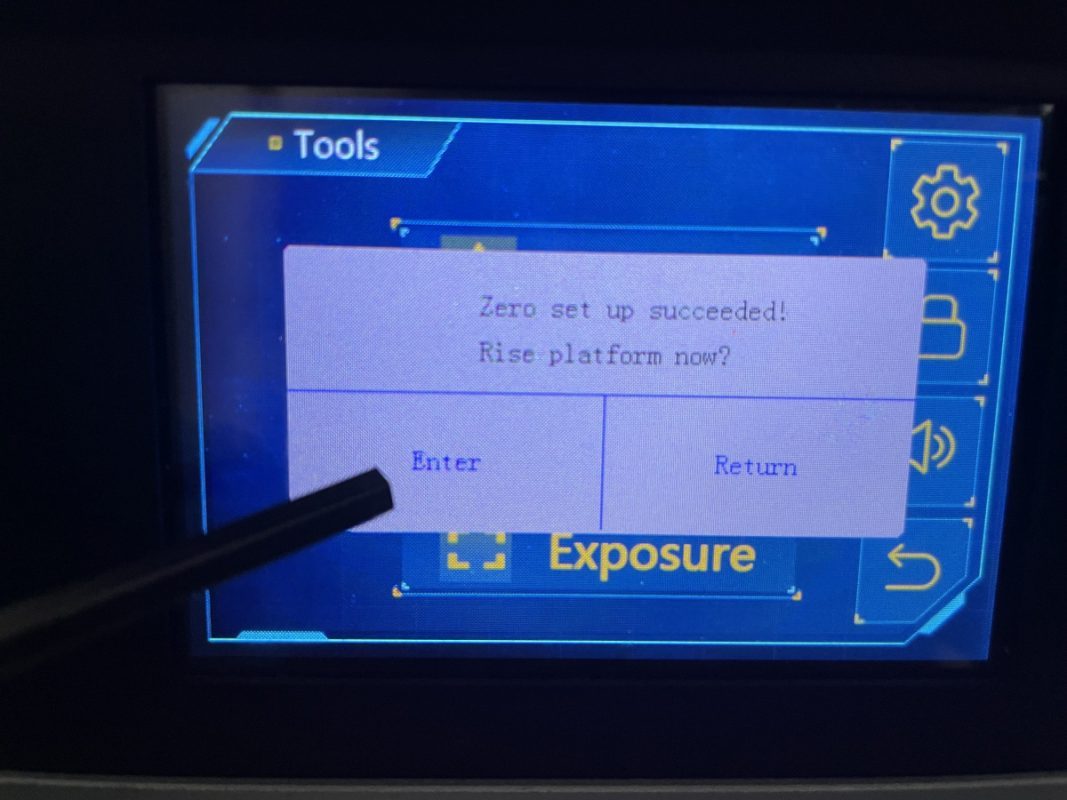 Your Anycubic Photon Mono X or similar 3D printer should now be level. Now you can remove the A4 paper, put the resin vat back in and get back to 3D printing some awesome models. 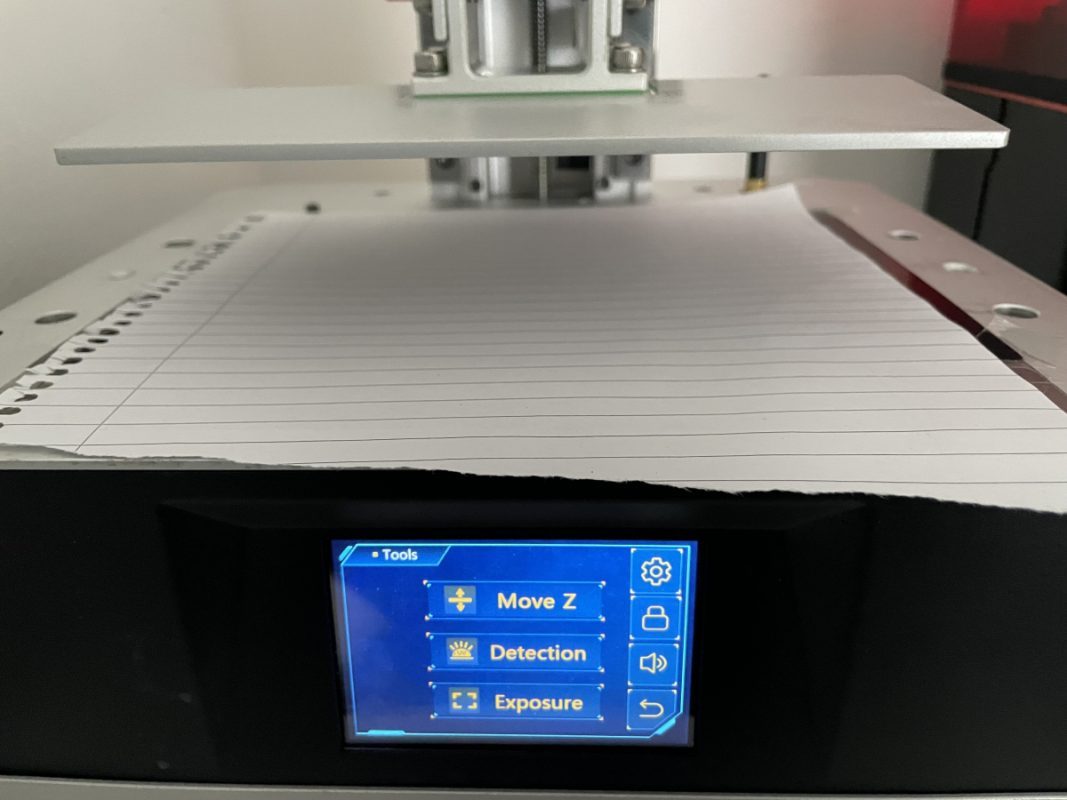 You can check out the Anycubic Photon Mono X Manual for the leveling process on page 12 of the PDF.

How to Level the Elegoo Mars 2 Pro & Similar Resin Printers

The first step for leveling the Elegoo Mars 2 Pro or similar 3D printers is to make sure the rotary knob at the top is tightened, so it is secure to the machine. 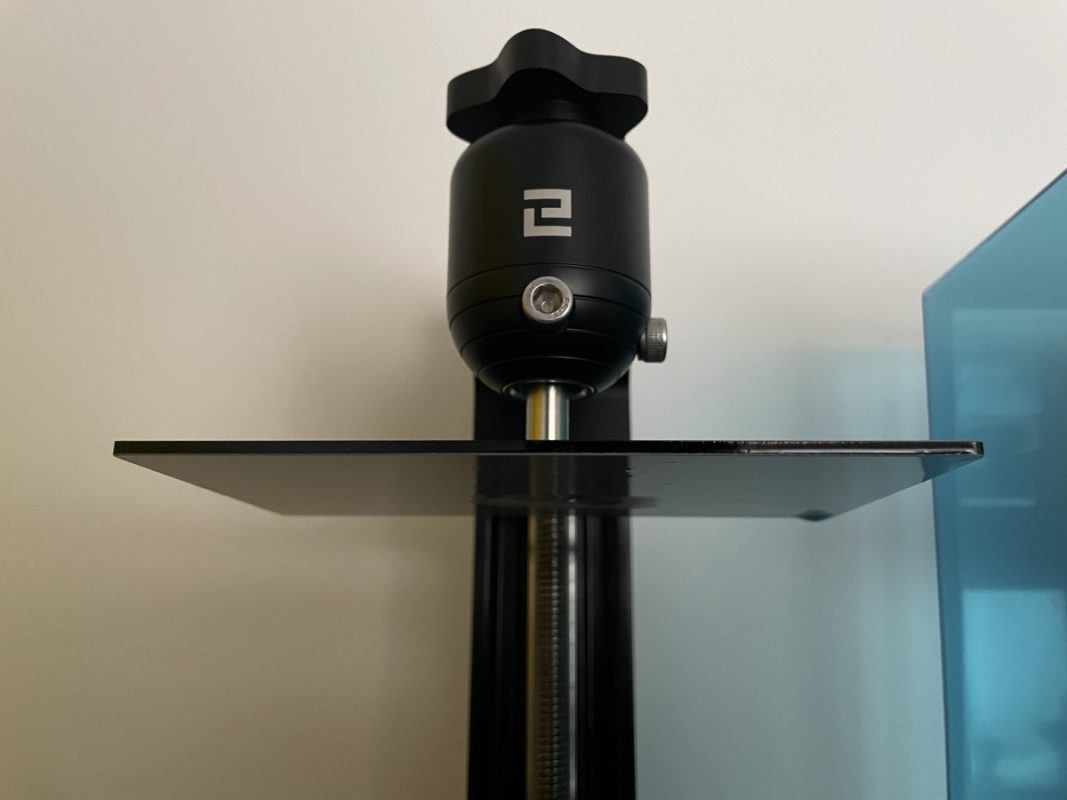 We want to clean the build plate with a paper towel or something similar, so there isn’t any uncured resin that can spread around. 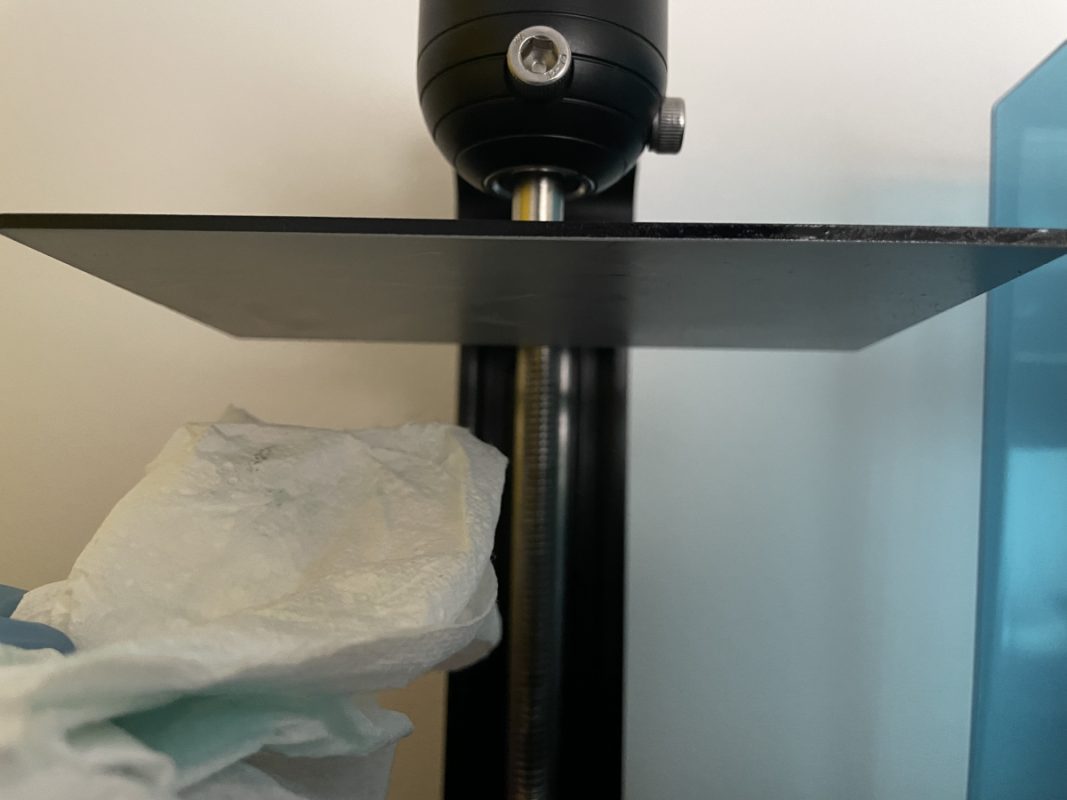 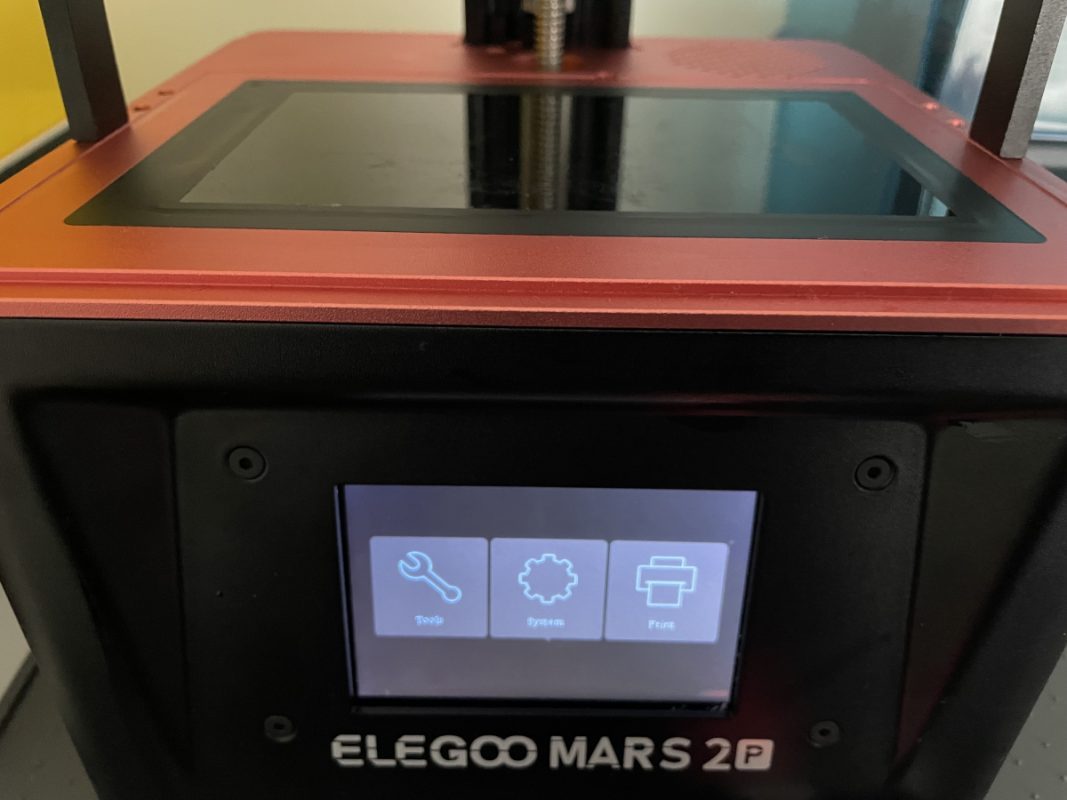 Loosen the build plate screws with a 5mm Allen Key. 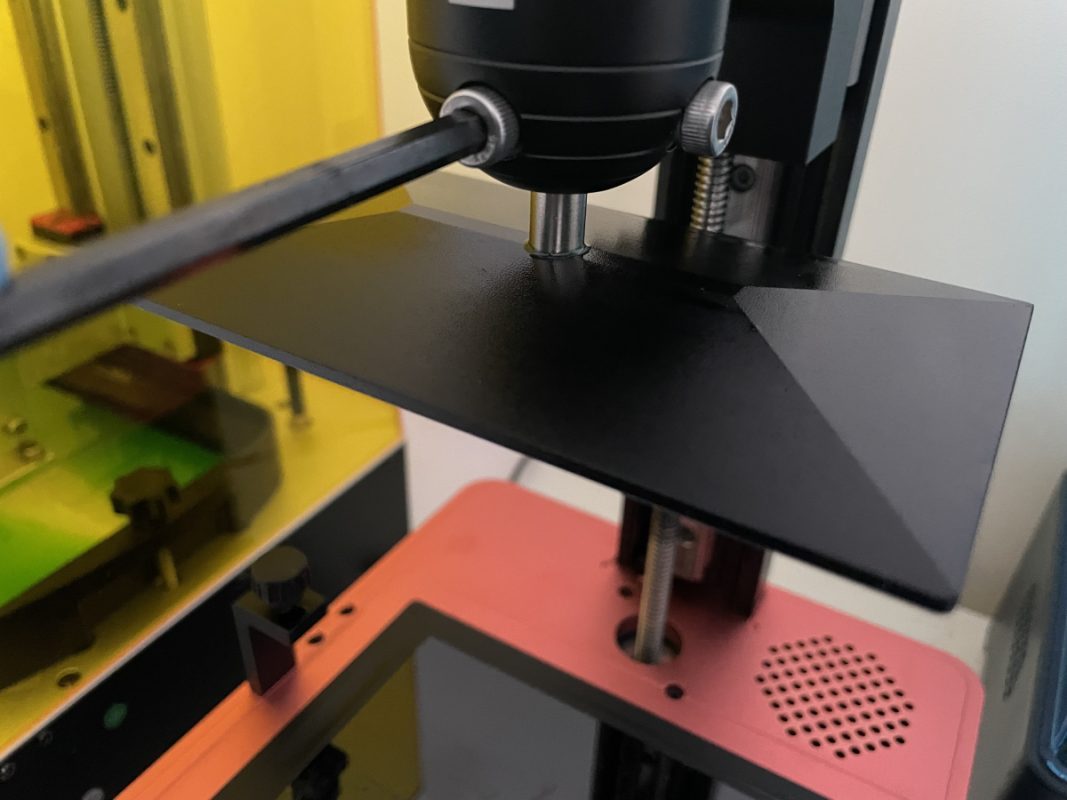 The build plate should be able to move side to side and around due to the ball leveling design. 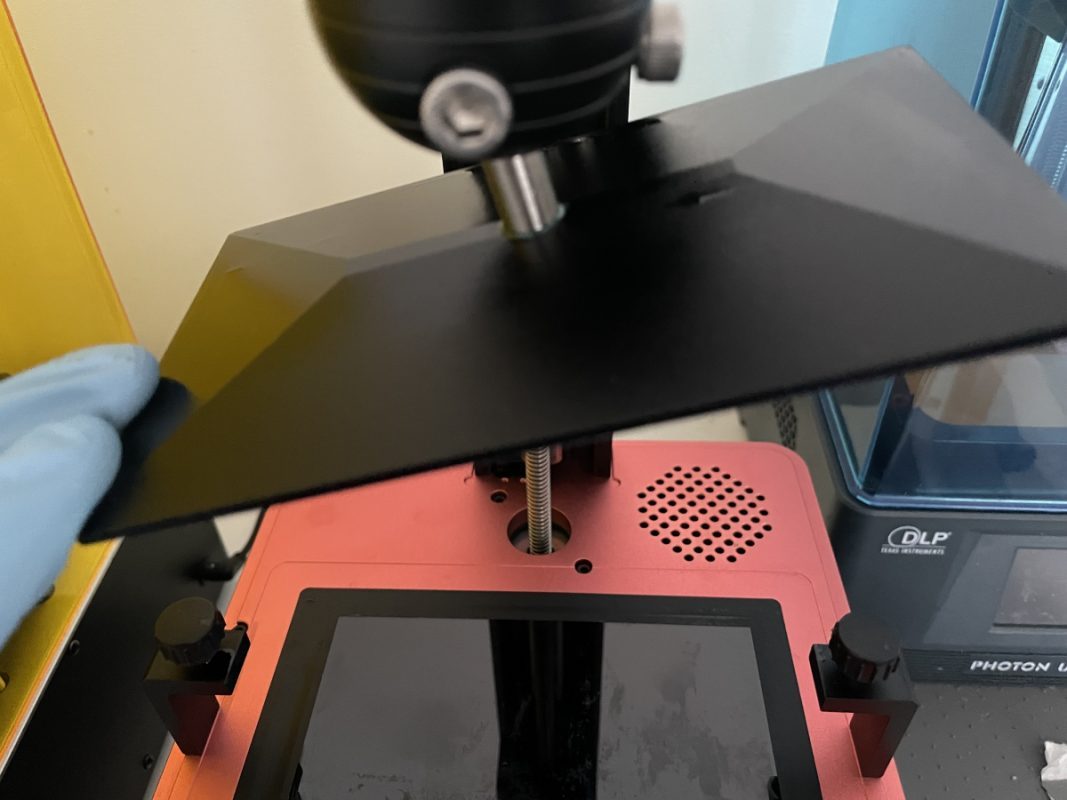 Place your piece of A4 paper on top of the screen. It’s a good idea to make the paper smaller than it shows below. I did this in further down in the process. 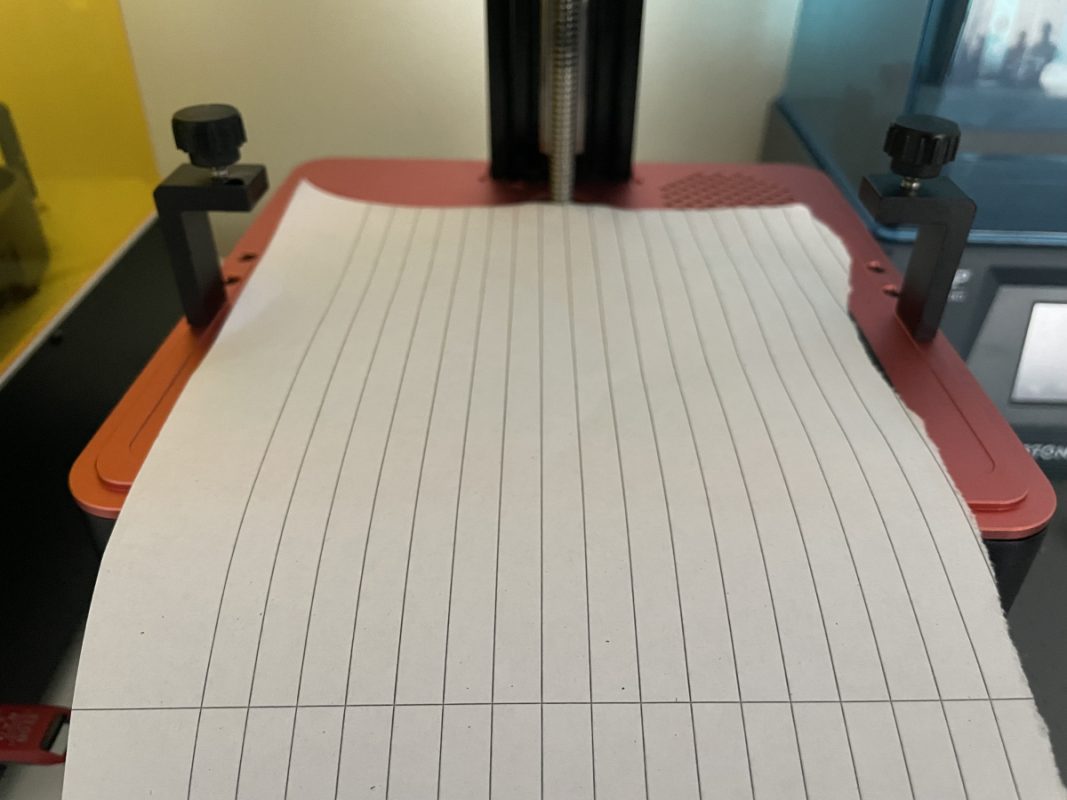 Hit “Tools” on the control screen. 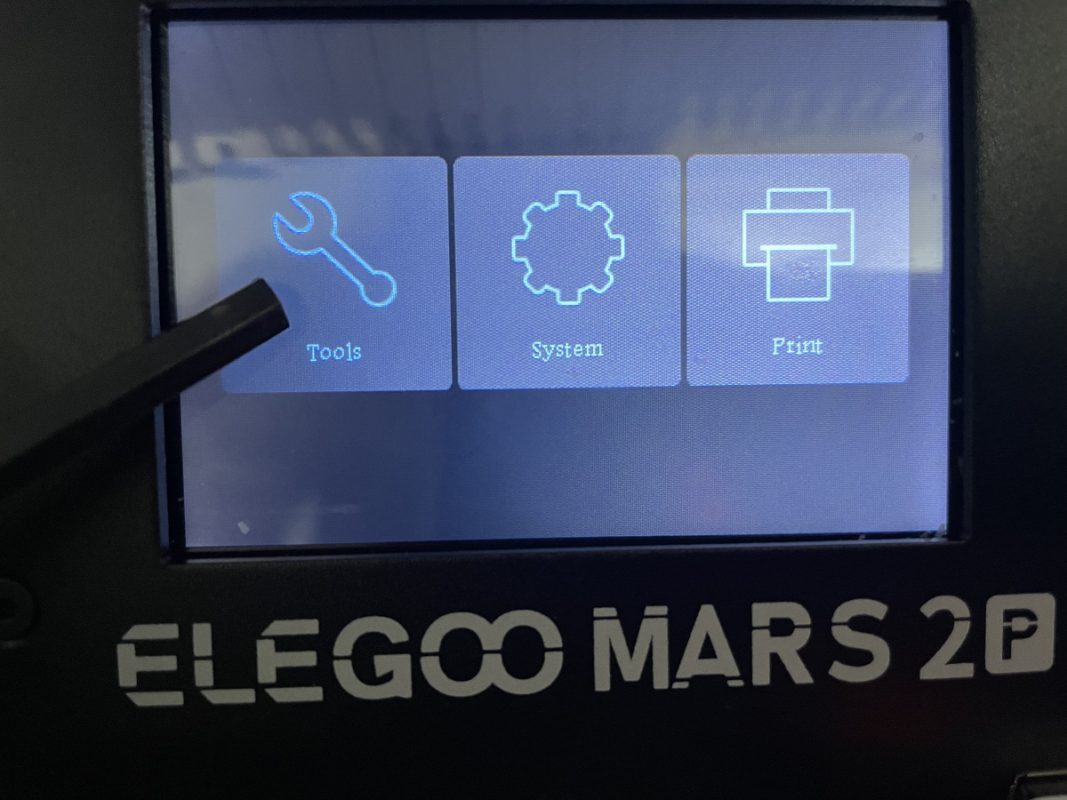 Select “Manual” so we can move the build plate. 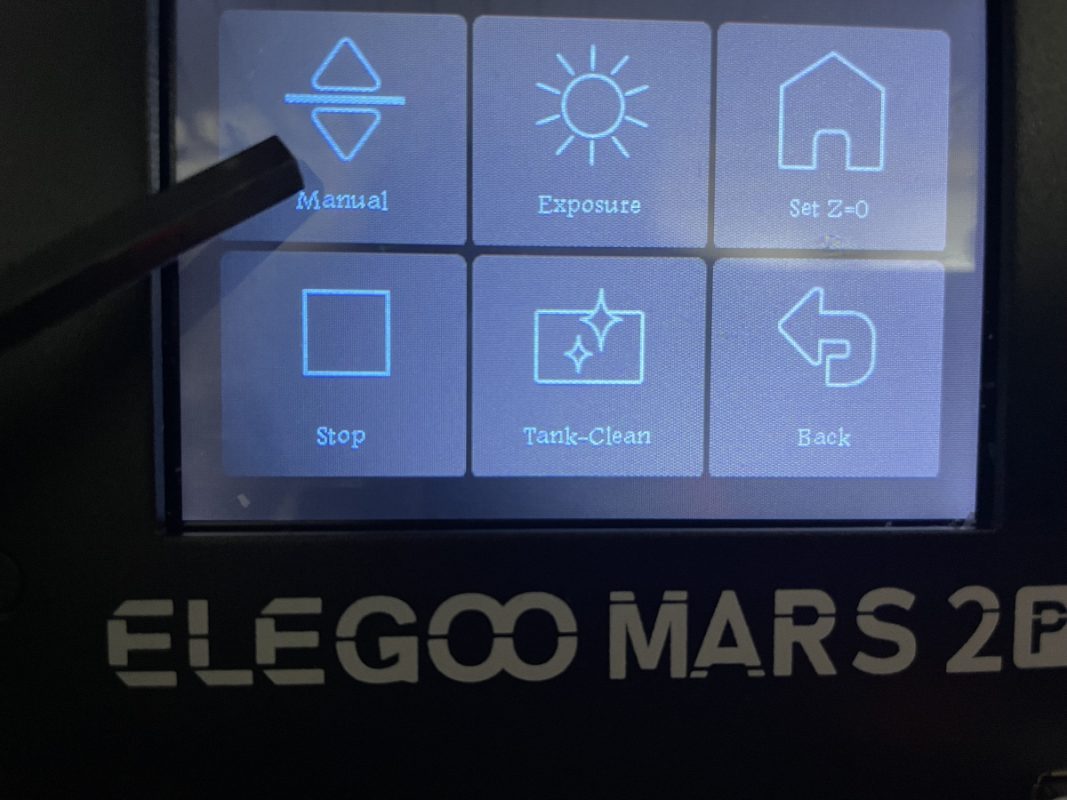 Hit the “Home” button to lower the build plate to the screen with the A4 leveling paper. 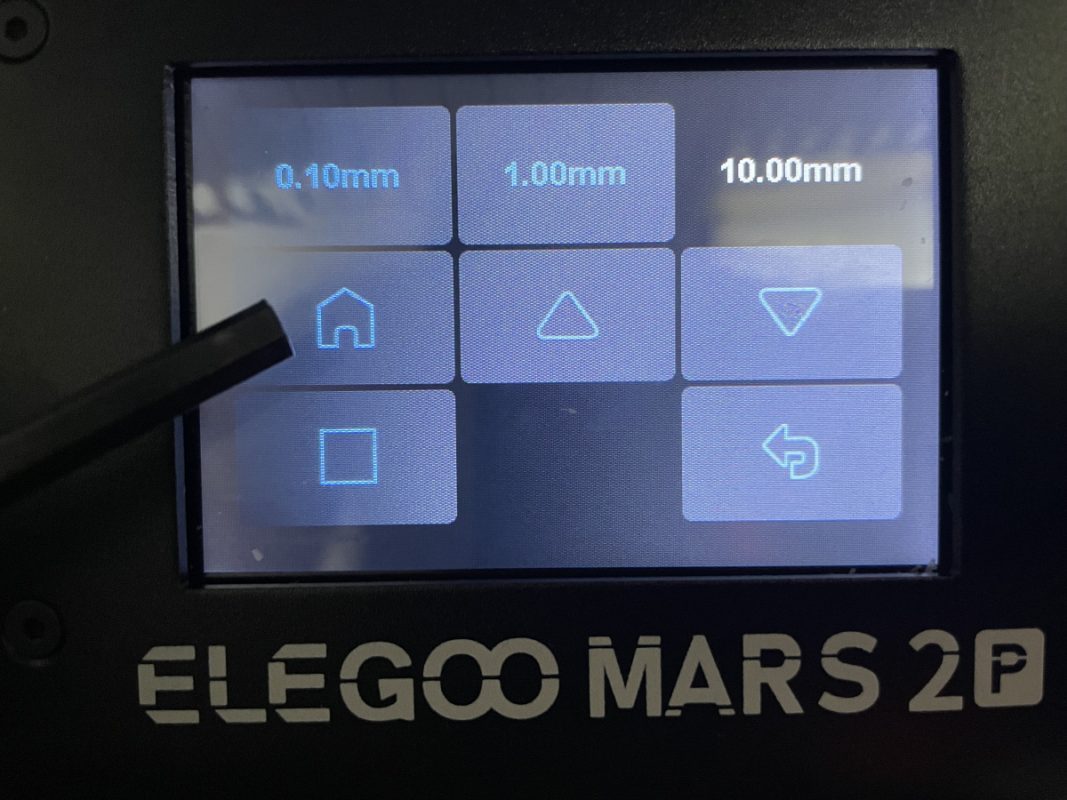 Here is how it looks after the build plate is homed. As you can see, I reduced the size of the paper so I could better angle the build plate with the machine so it’s even. 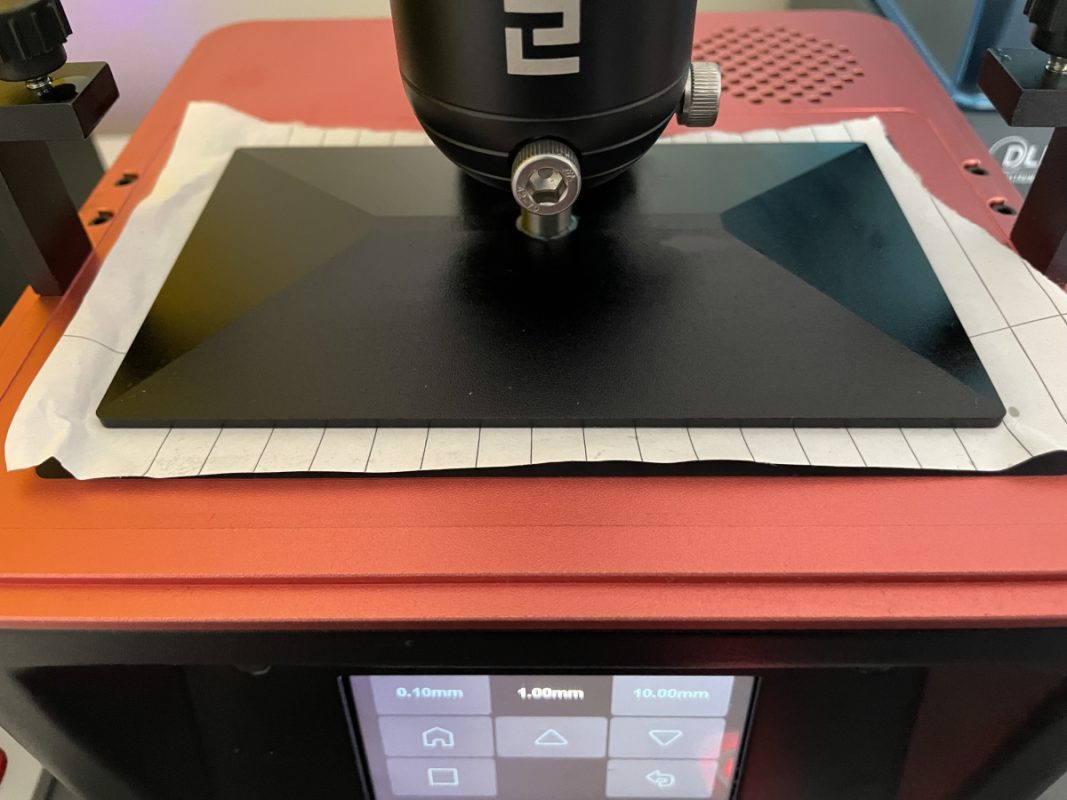 After you get a good angle on the build plate and it’s even, tighten up the two leveling screws. Make sure to tighten the screws quite firmly so it stays in place properly. 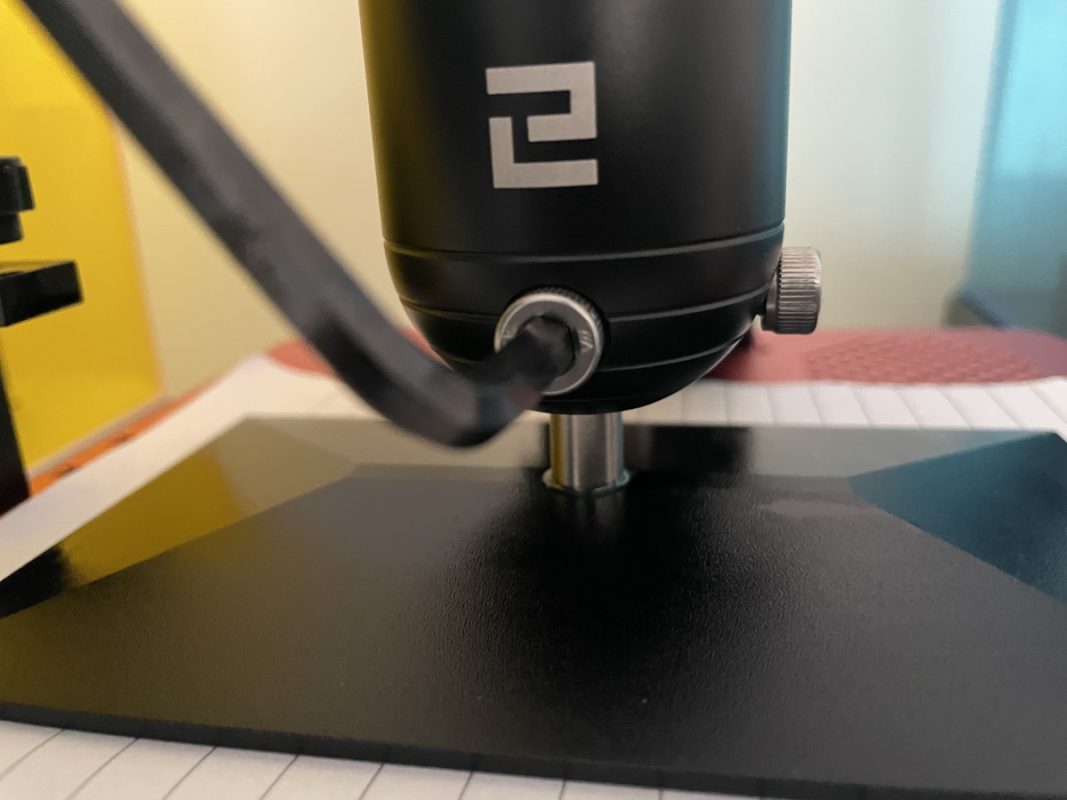 We want there to be a little bit of wiggle room for the A4 leveling paper to move around, so if you can’t move the paper at all, raise the build plate 0.1mm until you can. 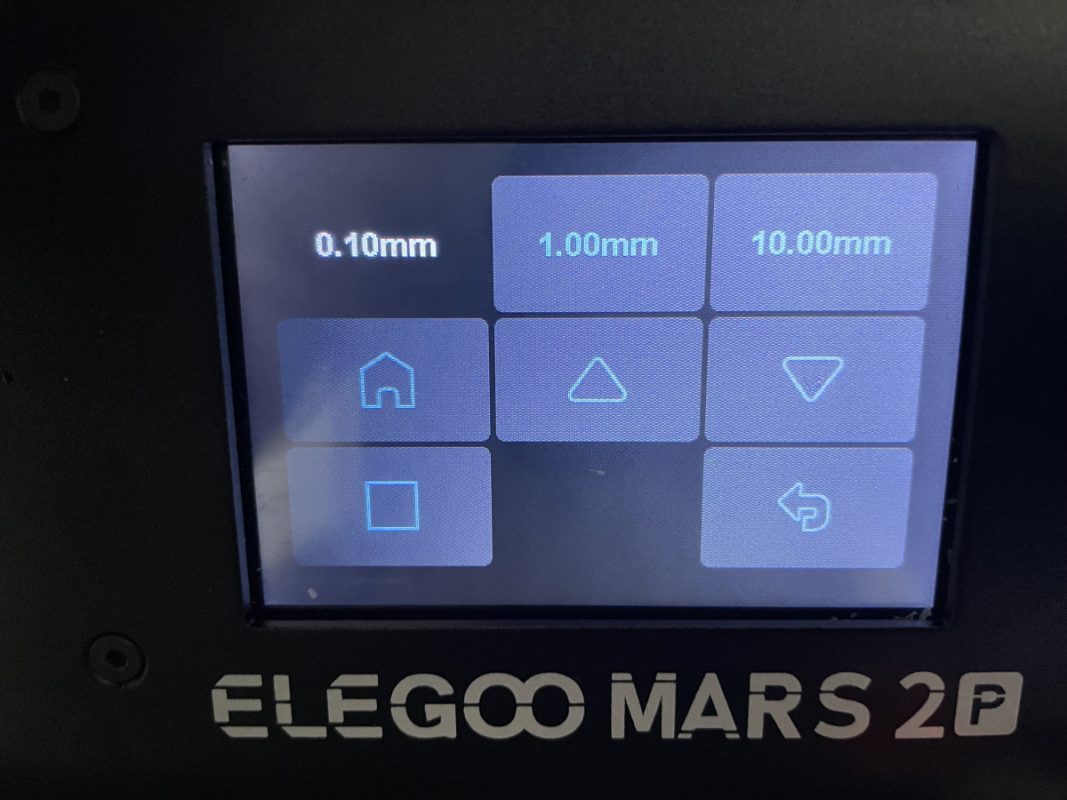 Here is me pulling out the leveling paper after moving the build plate up slightly. 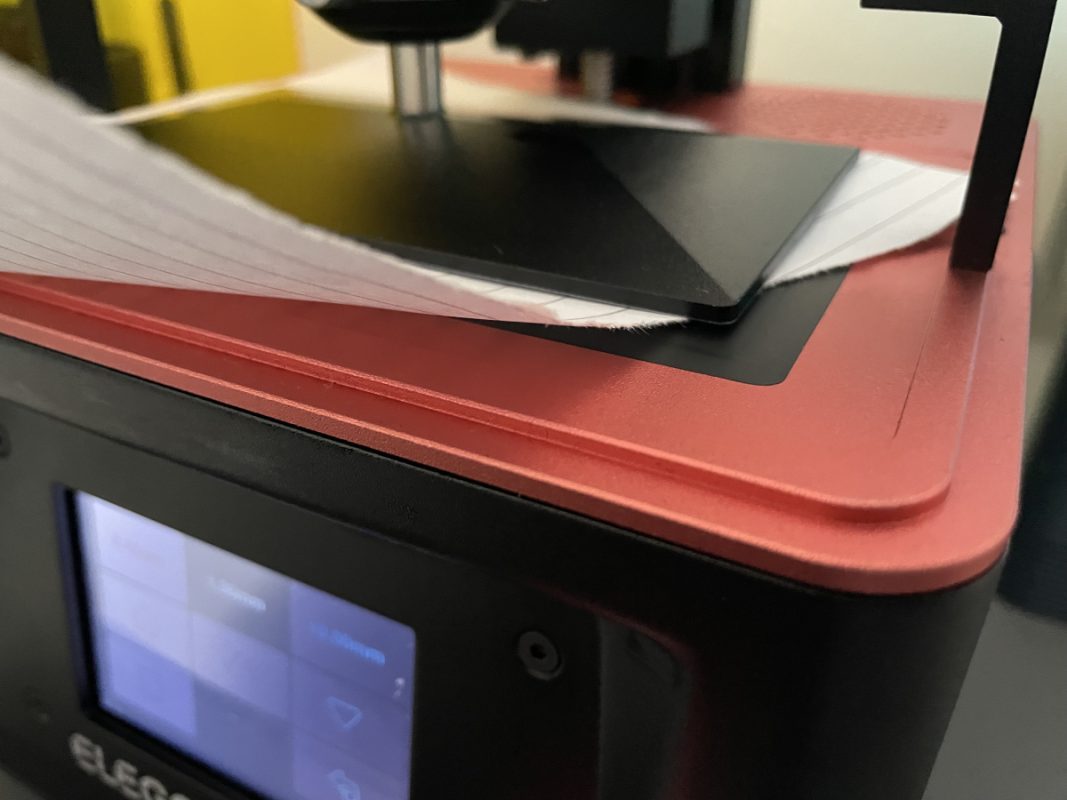 Now we can hit “Back” 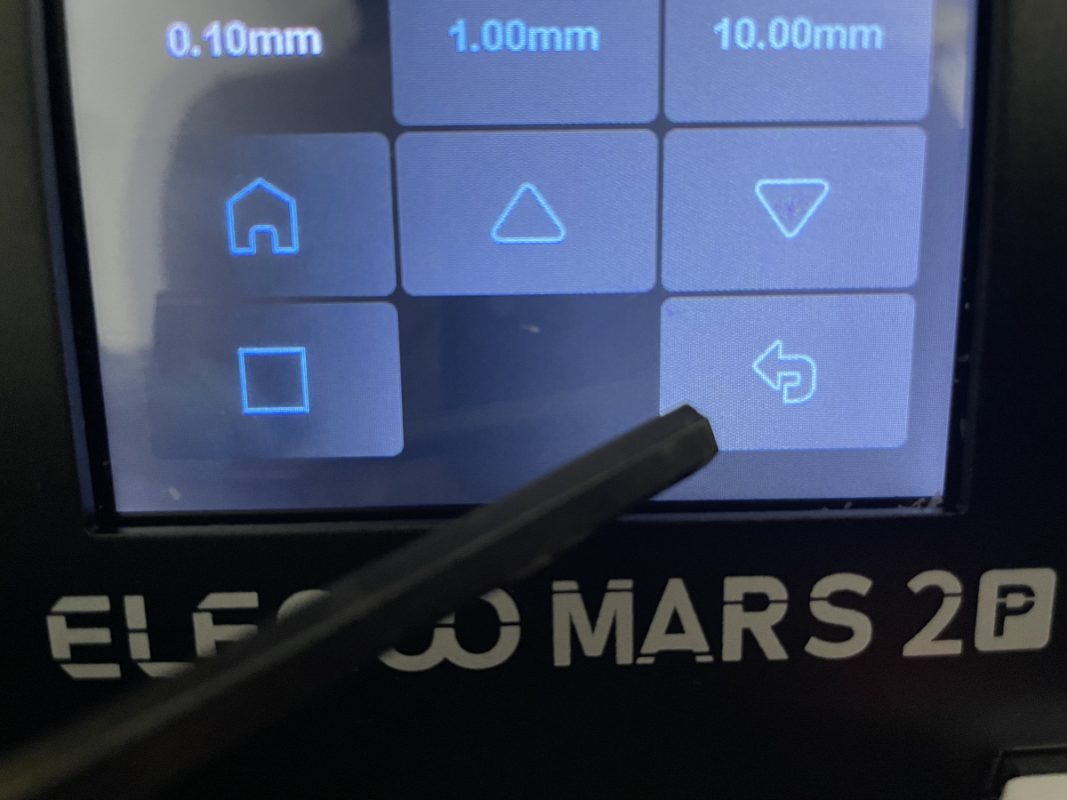 You’ll see the “Set Z=0” option to set the home position for the build plate. 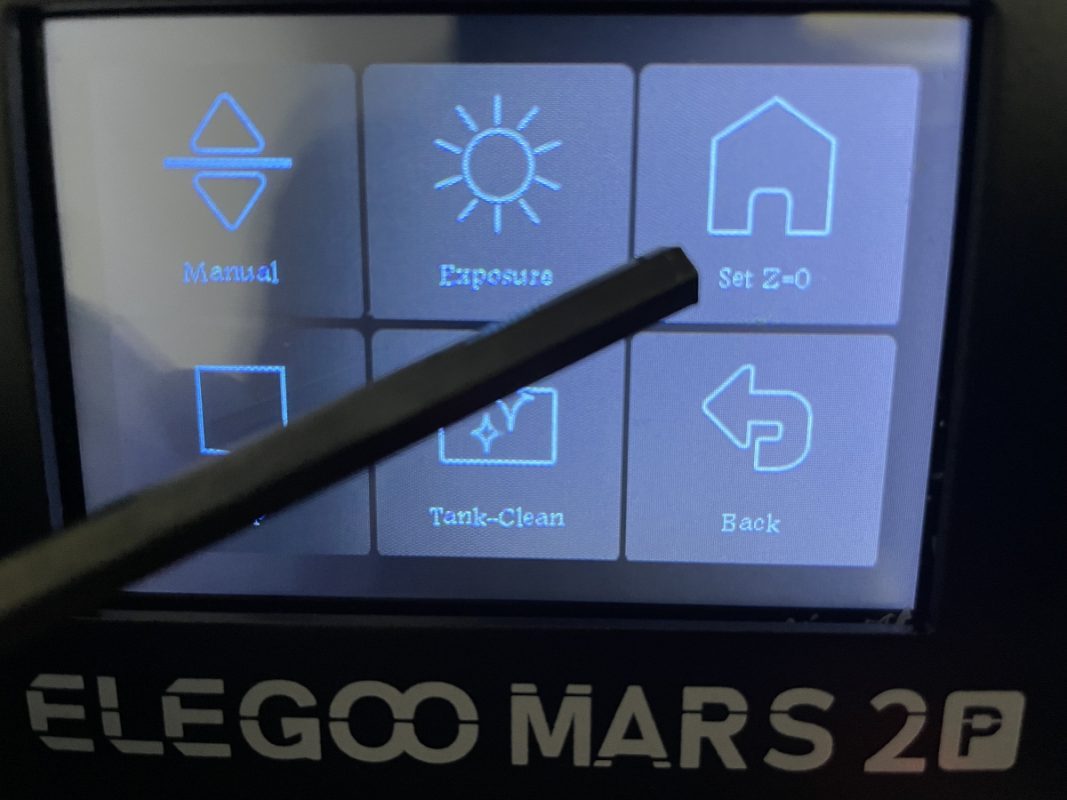 Hit “Confirm” to lock this position in. 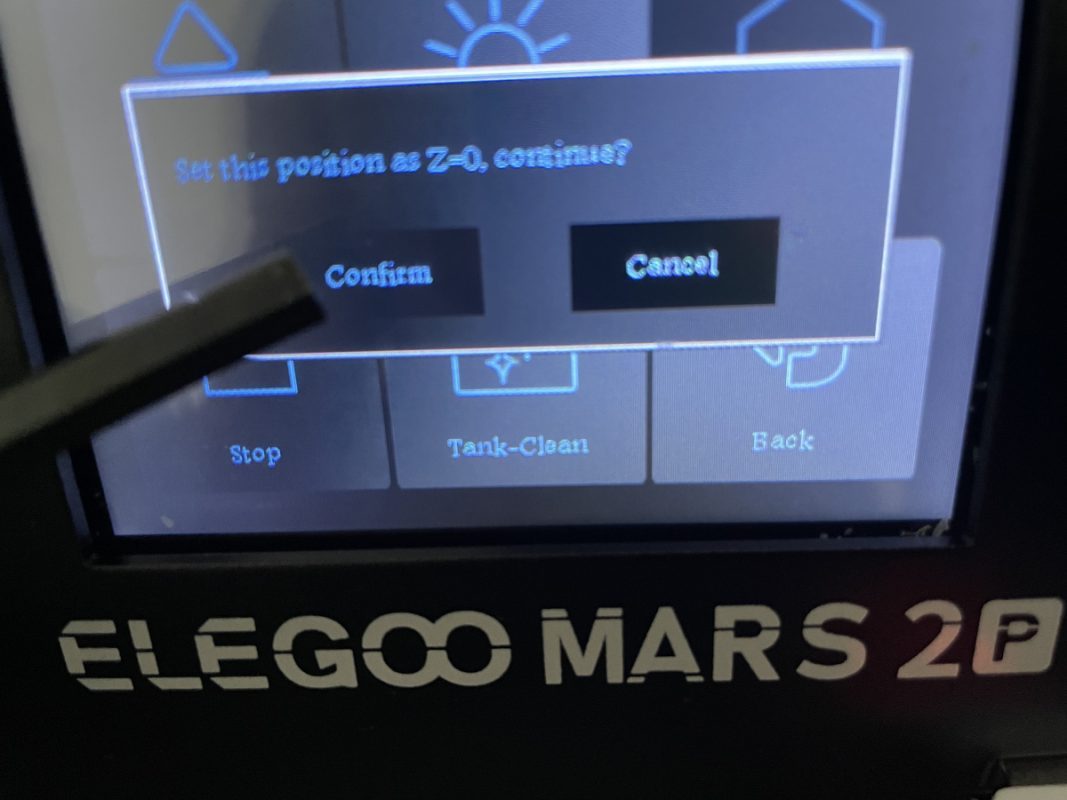 Your build plate should now be leveled.

Does a Resin Printer Have to Be Level?

Resin printers perform better when they are level, though it’s still possible to get successful prints when the bed is not fully level. The first layers are the most important so when the bed isn’t level, it can reduce the adhesion of these initial layers, potentially leading to print failures due to suction pressure.

Your build plate should be properly leveled and parallel to the screen before starting a print. Your resin 3D printer will take you through the leveling process when you first unbox and set it up.

Many users have expressed how leveling their resin printers has helped in improving their print results. A user who expressed how they had been getting failed prints with more than half of their prints was advised to check if their build plate was well level.

They went to level their 3D printer and came back with good news on how they began to create successful prints since then.

When you’re experiencing some print failures, one of the first things you want to check is how well level your build plate is. If it is not well level, it is most probably the cause of the failed prints and you want to take effective steps to ensure that your prints are well level.

Another thing to look out for is whether your 3D printer is on a level surface because the resin can start to pool to one side and make it more difficult to get resin to make full contact with the build plate.

How to Do the Flint Read Leveling Method for Resin Printers

To do the Flint Read leveling method:

Some people recommend doing the Flint Read leveling method for leveling their resin 3D printers. There are mixed reviews but they are mostly positive. The main precaution is to not rotate the plate too hard as it can cause scratches in your FEP.

There are reports of people who say they do this method and have never had a leveling issue. Many people who tried the paper leveling method unsuccessfully then tried this method found it to be much better.

Here is the original video by Flint Read showing people the method.

How Often Should You Level a Resin 3D Printer Bed?

Another reason to level your resin 3D printer bed is if you are about to print a large model that may need the extra confirmation that the build plate is level. Sometimes your printer can compensate for bad leveling with smaller prints, but larger prints may not be so forgiving.

If you change your resin vat or are experiencing many failed prints, that’s a good sign to level your build plate again.

As long as you tighten the screws properly on your 3D printer, they shouldn’t come loose. In some cases, people have found the screws to be a little loose, so you would probably want to just tighten them and potentially re-level the build plate.

One rule of thumb you can follow on how often you should level your resin printer is that leveling should be done when:

A user who had just received their Anycubic Photon Mono X had their home position too low. Whenever they hit the home button, the build plate touched the screen but continued to go down. It results in a weird grinding, clicking noise that is pretty loud.

They ended up fixing this by ensuring to loosen up the four build plate screws at the top, then leveling the printer as usual.

When you press “Home” your build plate lowers until it hits the Z-limit switch, which indicates to the printer that it’s at the bottom, touching the screen.

You may be having an issue with the limit switch or light sensor at the back of the printer, just below the platform rail. You can try unscrewing this and carefully cleaning off marks of resin that is blocking the light.

Some people have addressed this issue by updating their firmware so you can try to download the latest firmware from your brand’s website and get that installed on your printer.

One user mentioned that he overtightened the main thumbscrew that holds the build plate at the top, making the build plate retract slightly. When he loosened it up a little, it ended up reducing the clearance to properly make contact with the screen, resolving this issue.