This article will aim to guide you through using glow in the dark filament, as well as detail some reviews and ideas that you can put to use so keep reading.

What is Glow in the Dark Filament?

Glow in the dark filament is made out of phosphorescent materials, mainly being strontium aluminates, but zinc sulfide and calcium sulfide are also used (weaker versions).

Now these ‘glowing’ materials are used in combination with PLA or ABS filament to create glow in the dark filament.

When you notice how other composite PLA or ABS filament is made, such as carbon fiber, wood or ceramic filament, they are made similarly which takes on extra properties.

These materials work by actually absorbing energy directly from energy sources, the strongest source being ultraviolet radiation from a black light. Direct sunlight is the next most powerful energy source, followed by fluorescent light then finally incandescent lights.

It glows for a relatively short period of time once ‘charged up’.

Glow in the dark is mostly green because the human eye is the most sensitive to green light, meaning green can glow brighter through our perceptions. This is also why you see night vision goggles in a greenish tint.

Glow in the dark filament doesn’t look very special at first, looking like standard filament, but after absorbing enough light it will showcase its awesome abilities.

You can get your own glow in the dark filament from Amazon for a great price. I’d recommend the MGChemicals PLA Glow in the Dark Filament, which has great ratings and good dimensional accuracy for smooth printing.

Beginners Guide to Printing Glow in the Dark Filament

If you want to know how to print with glow in the dark filament, I have some general settings and guidelines to try and follow.

Temperature for Glow in the Dark Filament

If you decide to use a hardened nozzle to print with the glow in the dark filament, you should slightly increase your temperature, as it has less thermal conductivity than brass.

Printing Speed for Glow in the Dark Filament

Many users reported that the glow in the dark filaments work under the printing speeds as low as 15 mm/s to the highest speed of 100 mm/s.

So definitely, this is a very broad range, so you should set the speed of about 50 to 60 mm/s for better smoothness of prints. PLA-based glow in the dark filaments can provide high-quality print for you.

Heated Bed for Glow in the Dark Filament

I have found that the heated bed requires a set of 60 to 70°C. However, ABS based filament will have to be set with a heated bed at a temperature of around 100 to 110°C for getting good quality prints.

Use of Cooling Fan for Glow in the Dark Filament

Infill Options and Other Factors

Increasing the wall thickness of prints may enhance the final prints and get your ‘glow’ to last longer. By decreasing the infill and increasing the shells, you can produce a good quality of glow in the dark prints.

Is There Glow in the Dark PETG?

Yes, PETG is a new kind of plastic 3D printing material. It has similarities with ABS and PLA printing. This PETG is transparent in light, but it glows in the dark. This is very popular in the market because it has the following benefits-

Is Glow in the Dark Filament Abrasive?

Yes, glow in the dark filaments is abrasive and sometimes hard to print with it.

A standard brass nozzle might not hold up so well against an abrasive glow in the dark filament, so it’s a good idea to swap out your nozzle for a hardened steel one.

It may be a good idea to also use a nozzle with a wider diameter to reduce overall abrasion. A good nozzle diameter to go with would be a 0.6mm nozzle, so you can still balance out print quality with less abrasion if you want.

Best Glow in the Dark Filament to Buy

As already mentioned, Hatchbox PLA Glow in the Dark Filament from Amazon is a great choice for your 3D printing desires. It’s a 1KG spool which prints smoothly and usually doesn’t require any setting changes compared to basic PLA.

MGChemicals also have a range of their Glow in the Dark Filament from Amazon, made from PLA and has reviews which mention just how bright this glow in the dark spool of filament is.

One user who has used the Hatchbox PLA filament as well as many others said this one is the best. Layer adhesion came out great, and they didn’t get any stringing in the printing process.

So if you are looking for the brightest glow in the dark filament, you have your answer.

The print temperature range is fairly large, so it will take some temperature testing to get it perfect, but once you get going you’ll love it.

Trying to get the best settings in Cura for the Ender 3 can be quite challenging, especially if you don’t have a lot of experience with 3D printing. I decided to write this article to help people who are a little confused on what settings they should be using for their 3D printer, whether they…

Resin 3D printing can create some really high-quality models, but people wonder whether they need support while printing. At some point, I wondered this myself, so I went out to properly research the best methods of making supports for resin prints. The best way to add supports to your models is to use the auto-generated…

Printing small parts on a 3D printer can be tricky if you don’t have the right advice or tips to get it done. There are some useful things that you should know to 3D print small objects so I decided to write about them in this article. To 3D print small plastic parts, use a… 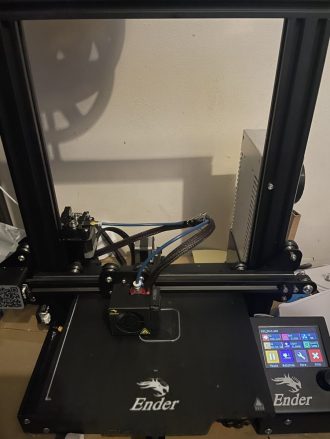 Calibrating your 3D printer is essential in producing the best quality of 3D prints that you can get on your machine. There are many parts and things you want to calibrate on your 3D printer, whether it’s an Ender 3, Prusa, or Anycubic printer. This article is going to take you through some important calibrations…

When looking into your slicer settings, you would have come across the cooling or fan settings that control just how fast your fans are running. These settings can have a pretty significant impact on your 3D prints, so many people wonder what the best fan settings are. This article will attempt to guide you through…

Many people have experienced issues with their Ender 3 not connecting to their PC, as well as not detecting it at all. This article will go through different fixes that have worked for various users to get a proper connection. Keep on reading for more about fixing your Ender 3 connection problems. How to Fix…