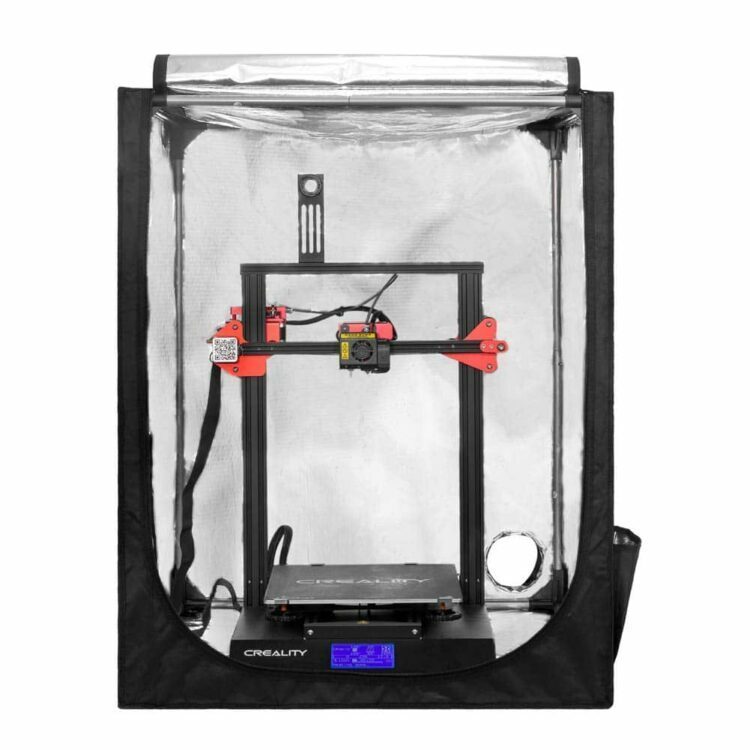 Many people have 3D printers that don’t have enclosures which can definitely hold back 3D printer quality in some cases. The Creality 3D Printer Enclosure is a major solution in the market that many don’t know about which does a lot more than just protect your 3D printer.

This enclosure has been gaining popularity because it works so well, although fairly premium. The way I think about the value of an item is to think how many years it will last you, and what value it provides in those years.

If something costs $100 and lasts 10 years ($10 per year) while providing plenty of value in time saved and higher quality, then all it would need to do is provide more than $10 per year worth of value to be worth the purchase.

With that in mind, let’s get into whether the Creality 3D Printer Enclosure (Amazon) is worth buying by looking at its features, benefits, downsides, what current customers say about it and more.

Below is a quick visual which shows just how simple and effective this enclosure is.

I’ll start off with the features.

Features of the Creality Fireproof Enclosure

We get a nice increase of print quality by constantly regulating our printing environment temperature. There is a possible negative environmental impact present without using an enclosure, so this is a great solution for that.

I’ve had cool operating temperatures ruin prints, as well as drafts through my window, so using a Creality Enclosure in these instances would be a great problem solver. Printing stability is also improved.

Overall, in the years that you will be 3D printing, you can be getting significantly better results, especially with materials like ABS or Nylon. Bed adhesion also improves at higher, stable operating temperatures which the enclosure brings about.

When we have our 3D printers in a dusty room, it can actually ruin filament quality and cause clogs in the long run. Although it doesn’t often happen, dust can build up over time which we notice every so often across the top of our 3D printers.

With the Creality 3D Printer Enclosure, we simply reduce the dust that comes into contact with our filament, extruder, nozzle and other important parts, giving us a better printing experience.

3D printers are now getting much quieter, but I know there’s plenty of people who still have pretty loud machines so this can help you out in the sound & noise area. It’s not going to completely block out sound, but it should reduce noises from your machine.

Along with dust, noise and sound, you also have an extra level of protection from strong odors and particles that are emitted from your 3D printer. It should stay in the tent for the most part.

If the enclosure exterior gets dusty you can just clean it with a damp cloth.

Creality isn’t new to creating a product with a stable structure. The simple, yet very stable enclosure keeps its shape using iron pipes and high quality material to build up this product.

You don’t have to worry about accidentally knocking this over, and it’s really built to last. There is enough space to hold your printer without issues.

The installation side of things are simplified, where it can be assembled very quickly.

The main feature that gives people peace of mind is the flame retardant properties, which means if there was a fire, the enclosure would melt rather than be set on fire and won’t spread either.

With some of the stories previously heard in 3D printing, a few of which can be found in my previous article 3D Printing When Not At Home, we don’t want to take any chances, so this is a great addition to our 3D printing arsenal.

It is equipped with pure aluminum film and flame retardant material.

The Creality Enclosure (Amazon) comes with reserved tool pockets and is easy to carry. You also have the ability to fold the product away with its folding storage for top efficiency.

There is easy printer access through the zipper at the front of the enclosure, which is see-through, so you can monitor your prints at all times.

This isn’t just purely a transaction, it’s a service that you are receiving to make sure what you get actually provides value and a positive experience. Most people know of Creality’s after-sales service but if you don’t, just know that you are well taken care of.

Creality has a track record of great customer service, before and after sale.

Benefits of the Creality Fireproof Enclosure

Downsides of the Creality Fireproof Enclosure

One of the downsides mentioned is how the zipper area isn’t big enough to work on your 3D printer easily. It’s more so designed for the Ender 3 rather than the Ender 5 making it difficult to reach things on the other side of the printer.

To use the Ender 5, you need to adjust the position of the filament holder and the LCD screen.

The stitching could be better done in some cases, because some people reported the stitching becoming undone while trying to fit the enclosure. These are pretty rare cases though.

The metallic liner may actually interfere with the signal strength of parts such as a Raspberry Pi, a webcam, or other wireless device.

Also, the enclosure is designed to actually fit 3D printers which have filament guides or holders which don’t extend out past the frame, so keep this in mind.

There aren’t many downsides out there which is a great sign of the Creality 3D Printer Enclosure (Amazon).

Specifications of the Creality Fireproof Enclosure

What Comes With the Creality 3D Printer Enclosure

Customer Reviews on the Creality Enclosure

You’ll see much praise for the Creality Enclosure from several customers who really feel like it’s a great product.

‘It’s worth the money, build thick and strong!’ is one review that clearly loves the build quality and effectiveness of the enclosure.

Not every product is a perfect fit for you so in some cases you’ll want to return it. One user who found it didn’t fit hit CR-10 max which is a very large 3D printer, found the seller very responsive and helpful in offering a refund. The after-sale experience is great!

Now for the people who have 3D printers which fit just fine like the Ender 3, they love it and find it very hard to point out any negatives in this product. The frame is painted steel tubing which is held together with sturdy plastic connectors.

The outer shell is a heavy nylon material, also with reinforced stitching. It will do a great job keeping heat in and dust out, especially great for those longer prints in cool environments like the garage in the winter.

Rather than spending money and time building an enclosure, this is a much more efficient and simple way to incorporate an enclosure into your 3D printing.

It could take many hours building a DIY enclosure which, along with materials, time & possible frustration could cost you a lot more than a Creality Enclosure. This is a product I’d recommend most people get on board with. It’s expensive but definitely worth it.

The level of quality and attention to detail of this enclosure is top-notch, and you can tell some time and effort really went into creating it.

Verdict – Worth Buying or Not?

This is a product that many people needed, but it was just never around, so we can all appreciate its release.

People have been slowly finding out about the Creality 3D Printer Enclosure and snatching them up all around. Reviews are great, product does the job plus more, and it looks great.

I’d definitely say this product is worth purchasing yourself.

There are two main sizes to fit your 3D printing needs:

Click the links above to purchase from Amazon, and happy printing!

For people struggling with various 3D printing issues, you might want have wanted more guidance towards getting ideal 3D printing results. I created a full course that's available to purchase called Filament Printing 101: Beginner's Guide to Filament Printing that takes you through some of the best 3D printing practices early on, so you can avoid those beginner mistakes.

Being in the 3D printing field I’m sure you would have seen these MK6, MK8, MK10 and E3D V6 terms thrown around without knowing the actual differences. I’ve made this post for that exact reason, to set out and explain, compare and answer what makes each nozzle different. Depending on what 3D printer you have,…

I was once in a position where I found it frustrating to clean & cure resin 3D prints, but that changed when I figured out the actual techniques people use. This article will be a simple-to-follow guide on how to clean and cure your resin 3D prints as the experts do. The most popular method…

I was sitting here beside my Ender 3, wondering what the best way to insulate a 3D printer would be. This is especially desired if your 3D prints are taking way too long to heat up, mainly with ABS prints. Having an insulated bed on your 3D printer is a neat upgrade that has helped…

3D printers need certain materials and parts to work properly, but people wonder what exactly they need. This article will get into what you need for 3D printers, both filament and resin machines. What Do You Need for a 3D Printer? You will need: 3D printer Computer Filament Downloadable STL file or CAD software Slicer…

Most 3D printers will be equipped either with a glass or aluminum bed surface, both having their own advantages. You also have another candidate which is spring steel, so how do you know which one you really want to print with? Choosing the right 3D printer bed is something that will affect your 3D printing…